Video—CHS Open House: The Children of Odysseus, with Joel Christensen

We were pleased to welcome Professor Joel Christensen (University of Texas, San Antonio) who returned for our first 2015 CHS Open House discussion, when we discussed the children of Odysseus, and multiformity in myth.

Also mentioned during the discussion: The Battle of Frogs and Mice (Batrakhomuomakhia). You can read more on the following page and from there follow the links to Parts 1–11:

You may watch the video discussion on the CHS YouTube channel, or below:

(with E.T.E. Barker) “On Not Remembering Tydeus: Agamemnon, Diomedes and the Contest for Thebes.”Materiali e Discussioni per l’Analisi dei Testi Classici 66, 9-44. 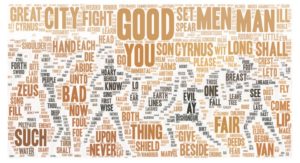