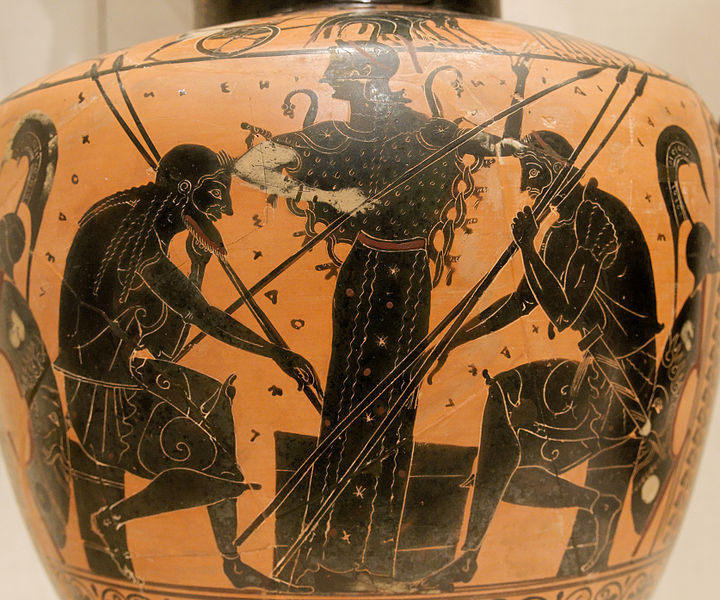 Achilles and Ajax playing a game, Exekias, circa 530 BC, [Public domain, CC BY-SA 3.0 or GFDL], via Wikimedia Commons

Many community members have been reading Gregory Nagy’s “A Roll of the Dice for Ajax” on Classical Inquiries, which explores how “Ajax dooms himself to an eternity of angry frustration over losing a chance to become the best of the Achaeans.”  We are happy to share a curated selection of resources designed to help readers explore this topic in greater depth and make new connections.

Iconography Cited by Nagy in “A Roll of the Dice for Ajax”
Accession Number 95.15
Vatican amphora 344

Secondary Texts
Best of the Achaeans via CHS

On Dice and Quarrels
Mahābhārata, Books 1–3, via Project Gutenberg, on Yudhiṣṭhira losing everything in a dice game
Pausanius 10.31.1 on Palamedes as inventor of dice
Pausanius 2.20.3  on Palamedes dedicating the dice he invented at a temple of Fortune
Herodotus 1.94 on the use of games in Lydia
Plato Phaedrus 274c–274e on the Egyptian god Thoth as the inventor of many things deserving of praise and blame, such as arithmetic, geometry, dice, and writing
Patroclus kills son of Amphidamas due to a quarrel over dice, goes into exile
Plutarch De fortuna Romanorum 7 on Caesar besting Antony at dice and other games, and the advice of a daimōn