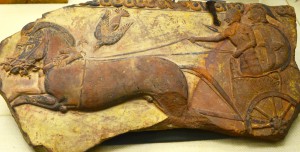 In Hour 25, we have had many wonderful discussions about clothes and weapons.

Here are two words from the discussion about clothes and armor:

In the Gallery below, there is a picture of Pericles with a helmet. It is said that he always wore a helmet because his head had a strange shape.

On a picture of a Corinthian helmet from the National Library, we see Apollo and Heracles fighting for the sacred deer.

Another picture shows Philopoemen. Philopoemen was named “the last of the Greeks”. He was captured by the Romans and condemned to drink the same poison as Socrates.

And a certain Roman, in praising him, called him the last of the Greeks, implying that Greece produced no great man after him, nor one worthy of her.

This passage from the Sourcebook gives a description of Achilles getting dressed for a fight.

In the midst of them all radiant Achilles put on his armor;

[365] he gnashed his teeth, his eyes gleamed like fire, for his grief [akhos] was greater than he could bear. Thus, then, full of fury against the Trojans, did he don the gift of the god, the armor that Hephaistos had made him. First he put on the goodly greaves

[370] fitted with ankle-clasps, and next he did on the breastplate about his chest. He slung the silver-studded sword of bronze about his shoulders, and then took up the shield so great and strong that shone afar with a splendor as of the moon.

[375] As the light seen by sailors from out at sea [pontos], when men have lit a fire in their homestead high up among the mountains, but the sailors are carried out to sea [pontos] by wind and storm far from the haven where they yearn to be—even so did the gleam of Achilles’ wondrous shield

[380] strike up into the heavens. He lifted the redoubtable helmet, and set it upon his head, from whence it shone like a star, and the golden plumes which Hephaistos had set thick about the ridge of the helmet, waved all around it.

Helene Emeriaud is a retired teacher. A Community TA for HeroesX in v3, she enjoys being a participant in Hour 25.