Gallery: Mesopotamia in the Louvre 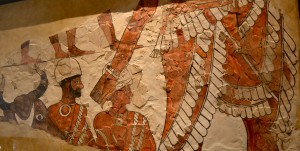 Painting of the Organizer of the sacrifice (1780 BCE), Mari

Herodotus is fascinating, and I have dreamed of Mesopotamia many times while reading his chapters about it. This gallery is going to take you through the rooms dedicated to Mesopotamia in the Louvre.

Herodotus writes about Babylon, and Hit, a city near the Euphrates River in his Histories.

Cyrus had made all the mainland submit to him, he attacked the Assyrians. In Assyria there are many other great cities, but the most famous and the strongest was Babylon, where the royal dwelling had been established after the destruction of Ninus [= Nineveh]. Babylon was a city such as I will now describe. It lies in a great plain, and is in shape a square, each side fifteen miles in length; thus sixty miles make the complete circuit of the city. Such is the size of the city of Babylon; and it was planned like no other city of which we know. Around it runs first a moat deep and wide and full of water, and then a wall eighty three feet thick and three hundred thirty three feet high. The royal measure is greater by three fingers’ breadth than the common measure.
There are a hundred gates in the circuit of the wall, all of bronze, with posts and lintels of the same. There is another city, called Is,the modern Hit or Ait, where the Euphrates enters the alluvial plain. Eight days journey from Babylon, where there is a little river, also named Is, a tributary of the Euphrates river; from the source of this river Is, many lumps of bitumen rise with the water; and from there the bitumen was brought for the wall of Babylon.
(Herodotus, The Histories (ed. A. D. Godley), Book 1, chapter 178)
http://www.perseus.tufts.edu/hopper/text?doc=Perseus:text:1999.01.0126:book=1:chapter=178
(Herodotus, The Histories (ed. A. D. Godley), Book 1, chapter 179)
http://www.perseus.tufts.edu/hopper/text?doc=Perseus:text:1999.01.0126:book=1:chapter=179

Helene Emeriaud is a retired teacher.