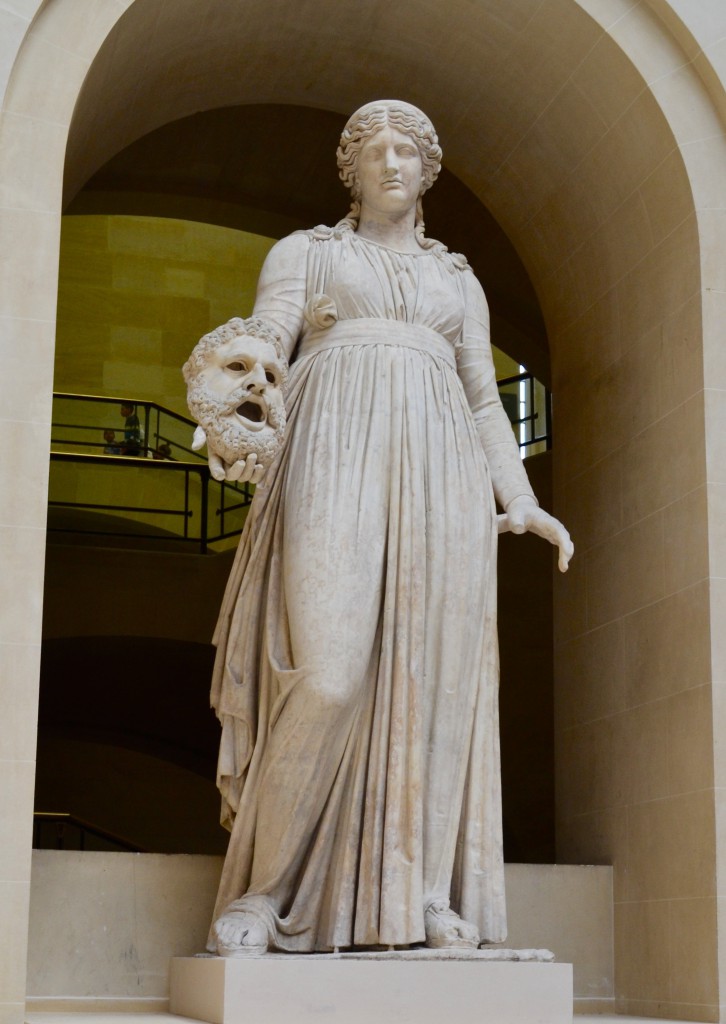 I have been reading The Death of Tragedy by George Steiner (available on Kobo). At the beginning of his book, Steiner writes:

In this Gallery we are going to the theater. My featured picture is one of Aphrodite, because she is at the root of the war of Troy and we see her often in Greek tragedies. Love is often present in dramas and the cause of many deaths.

Before the royal palace at Trozen. A statue of Aphrodite stands on one side; a statue of Artemis on the other. The goddess Aphrodite appears alone.

Powerful among mortals am I and not without reputation, I am called the goddess Kypris even in heaven. And those who dwell within the limits of the pontos and the bounds of Atlas 5 and who behold the light of the sun, whoever of those respects my power, to them I pay special honor; but I bring to ruin whoever has little regard for my greatness. For this feeling exists by nature even among the gods: they find pleasure when they are given timē by humans. I will soon prove the truth [alētheia] of my words [muthoi].

I also include some pictures of Orestes and Pylades and Electra.

We see them in several Greek dramas.

Here is a passage from Aeschylus’ Libation Bearers:

At the tomb of Agamemnon. Orestes and Pylades enter.

Hermes of the nether world, you who guard the powers [kratos] of the ancestors, prove yourself my savior [sōtēr] and ally, I entreat you, now that I have come to this land and returned from exile. On this mounded grave I cry out to my father to hearken, 5 to hear me…

[Look, I bring] a lock of hair to Inakhos [1] in compensation for his care, and here, a second, in token of my grief [penthos]. For I was not present, father, to lament your death, nor did I stretch forth my hand to bear your corpse.

10 What is this I see? What is this throng of women that advances, marked by their sable cloaks? To what calamity should I set this down? Is it some new sorrow that befalls our house? Or am I right to suppose that for my father’s sake they bear 15 these libations to appease the powers below? It can only be for this cause: for indeed I think my own sister Electra is approaching, distinguished by her bitter grief [penthos]. Oh grant me, Zeus, to avenge my father’s death, and may you be my willing ally! 20 Pylades, let us stand apart, that I may know clearly what this band of suppliant women intends.

Helene Emeriaud is a retired teacher. A Community TA for HeroesX in v3 and  v4, she enjoys being a participant in Hour 25.