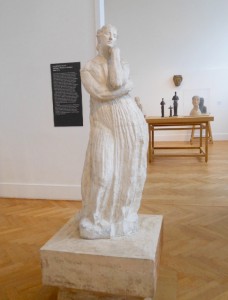 Penelope is waiting for Odysseus to come back. She is not a widow, Odysseus’ death is unknown. She is not looking for a new husband. Yet, her house is full of suitors. She is not going back to her father to choose a new husband. Her status seems ominous. She is the Queen of the blameless Odysseus  who is missing for ten years after the Trojan War. More than 100 suitors are wooing rather inappropriately for Penelope’s hand. By keeping her possible widow/bride-to-be status Penelope is controlling her future, her house and the future kingship rights of her son.

[275] and if your mother’s mind is set on marrying again, let her go back to her father, who will find her a husband and provide her with all the marriage gifts that so dear a daughter may expect. (Odyssey 1. 275–280), Sourcebook

The suitors are pressuring Telemakhos for his mother’s hand. He feels powerless.

[50] The sons of all the chief men among you are pestering my mother to marry them against her will. They are afraid to go to her father Ikarios, asking him to choose the one he likes best, and to provide marriage gifts for his daughter. (Odyssey 2. 50–55), Sourcebook

As for Telemakhos, I warn him in the presence of you all [195] to send his mother back to her father, who will find her a husband and provide her with all the marriage gifts so dear a daughter may expect. (Odyssey 2. 195–198), Sourcebook

Telemakhos is confused about his mother. One thing he knows, he cannot pay Ikarios.

[130] “Antinoos, how can I drive against her will [aekōn] the mother who bore me from my father’s house? My father is abroad and we do not know whether he is alive or dead. It will be hard on me if I have to pay Ikarios the large sum which I must give him if I insist on sending his daughter back to him. (Odyssey Book 2. 130–135), Adapted from the Sourcebook

How did Penelope control her house? What does Odyssey explicitly or implicitly tell us about the reign of Penelope?

One possible figure to be the King of Ithaka is Laertes. Odyssey explicitly puts that option to rest from Book 1 onwards. Athena in disguise as Mentes says,

…They say, however, that he [Laertes] never comes to town
[190] now, and lives by himself in the country, faring hardly, with an old woman to look after him and get his dinner for him, when he comes in tired from pottering about his vineyard. (Odyssey. 1. 189–193) Sourcebook

Odysseus’ father Laertes is away from Odysseus’ house. He is at his vineyard where he has been keeping himself busy with his orchards. He has not been acting as the ruler of the land. Who is in control of Odysseus’ house and his affairs? With Laertes out of the picture, and Telemakhos being a young man who is not ready to rule, Penelope is the only ruling figure of Ithaka in Odyssey in the absence of Odysseus.

A ruler’s success can be measured by the fertile land. A ruler who provides good leadership, dikē and keeps the gods happy with sacrifices, brings happiness to her/his people. One of the signifiers of dikė is fertile land. Odysseus, in Book 19 praises the fertility of the land in Ithaka.

110 and ruling over a population that is multitudinous and vigorous, 111 upholds acts of good dikē [= eu-dikiai], while the dark earth produces 112 wheat and barley, the trees are loaded with fruit, 113 the ewes steadily bring forth lambs, and the sea abounds with fish, 114 by reason of the good directions he gives, and his people are meritorious [aretân] under his rule. (Odyssey 19.110–115), Sourcebook

Odysseus is invoking himself at the same time recognizing Penelope’s power as a ruler. Penelope’s leadership has kept the land fertile, safe and prosperous.

Olga Levaniouk in her book Eve of the Festival [1] refers to Watkins for Odysseus’ utterance. She says “This utterance has been identified by Watkins as an instance of “ruler’s truth,” [2] a notion he defines as an “active intellectual force, verbally expressed, which ensures society’s prosperity, abundance of food, fertility, and its protection from plague, calamity, and enemy attack.”

Another example of fertile land is on Book 24. Odysseus is visiting his father Laertes for the first time after returning to Ithaka.

244 “Old sir,” said noble Odysseus, “it is clear that you are most knowledgeable in tending 245 an orchard [orkhatos]. It is well tended, with care [komidē], and there is nothing, 246 no plant at all–no fig tree, no grapevine, no olive tree ,247 no pear tree, no bed for herbs—no, there is nothing in this whole garden [kēpos] that lacks for care [komidē]. (Odyssey 24. 244–250), Sourcebook

A well cared and fertile garden is a sign of a ruler who rules with dikē. According to Gregory Nagy, “In ancient Greek poetics, a primary metaphor for dikē is a flourishing field or garden or orchard or grove or vineyard or any other such place where vegetation is cultivated.” (H24H, Hour 12)

Penelope is resourceful, just and masterful. Her cleverness in dealing with the suitors, keeping her status ambiguous as possible widow/bride-to-be allowed her to rule her house and her land.

How do you read her situation? Would her epithets say something about Penelope and her leadership?

Members can join in the conversation in the Forum.

Janet M. Ozsolak participated in v1 and was a community TA in v2, v3 and v4 of HeroesX.