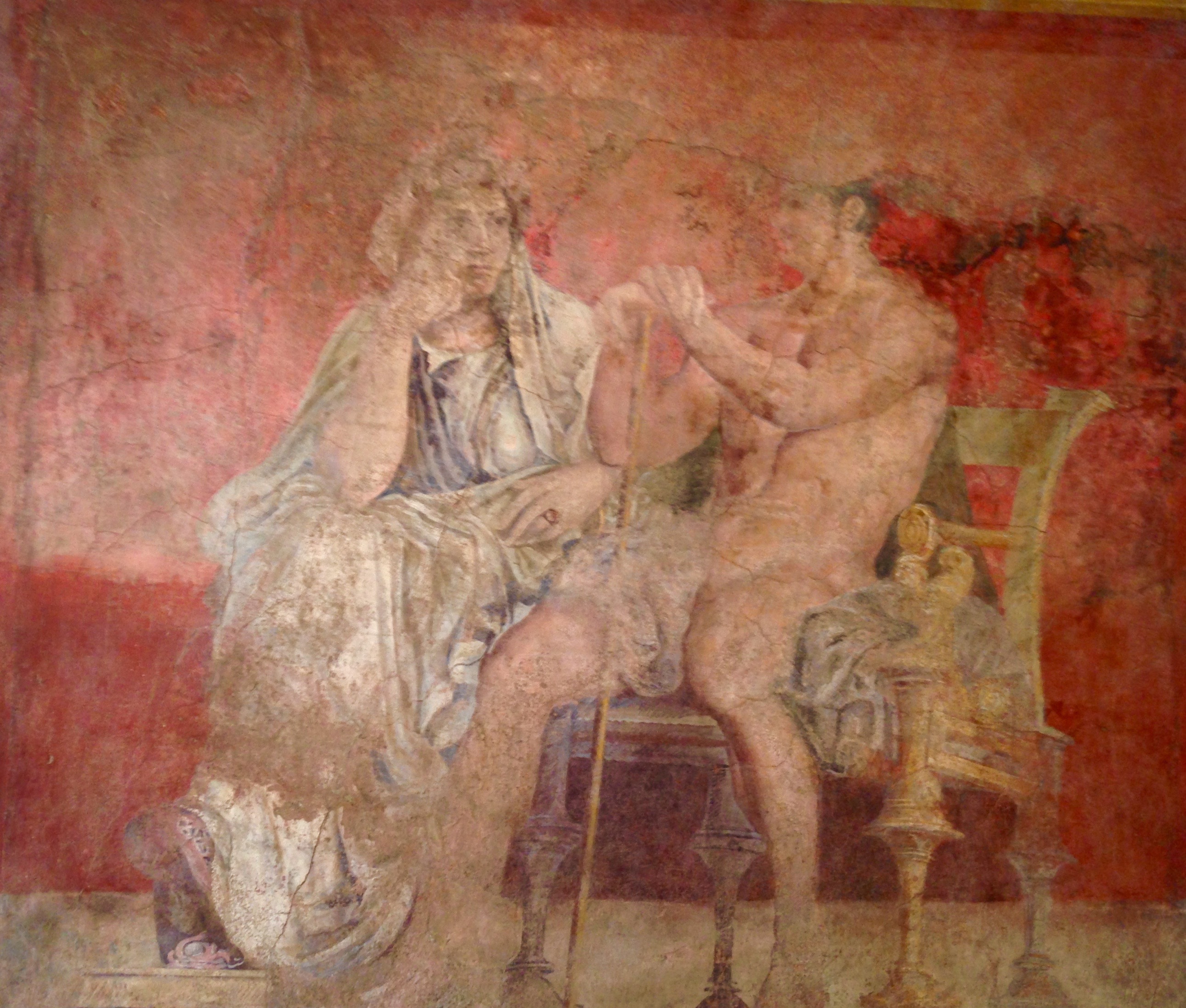 A few years ago, I went to an exhibition about Augustus at the Grand Palais. Virgil, who lived during the same era, wrote the Aeneid. This epic poem tells the story of the Trojan hero Aeneas and his adventures to found a new city in Italy and to start a new generation for the beginning of Rome. Augustus is cited several times in the Aeneid. This Gallery will show pictures of art inspired from the Aeneid and from the Roman Republic, and the Roman Empire. You will see Aeneas, his mother Venus, Dido, several pictures of Augustus and many more.

1§165 In this passage taken from the Dialogus of Tacitus, the private and reclusive figure of the poet Virgil stands in sharp contrast to the public and dominating figure of the emperor Augustus. And yet, the public reacts to the poet as if he were the emperor. The emperor is not the only public figure. So too is the poet. The private sphere of the poet is just as imperial as the public sphere of the emperor. Why? It is because the poet’s poetry has the same imperial prestige as the emperor’s power – in terms of a codependency claimed by both sides. The word for this codependency, as we saw in the passage taken from the Dialogus of Tacitus, is gratia, which I translate for the moment as ‘favor’.

1§166 This word gratia clarifies why I said age of Virgil in the title of this chapter, not age of Augustus. I highlight the poetry of Virgil, not the imperium of Augustus. But the fact remains that Virgil’s golden age of poetry was also an imperial age, and the poetry depended on imperial gratia ‘favor’, as the words of Tacitus make clear. To become the people’s favorite was not enough. The emperor’s favor was also needed. The poetry of Virgil was imperial as well as popular. Because this poetry was popular, however, it was needed by the imperial power. That power depended on the gratia ‘favor’ of the popular poet. This poetic gratia was not just a ‘favor’ to be returned. The word gratia conveys not only the idea of favor (‘graciousness’) but also the ideas of pleasure (‘gratification’) and beauty (‘gracefulness’). Implicitly, poetry returns the favor (‘graciousness’) of power by offering the pleasure (‘gratification’) of beauty (‘gracefulness’). Something very similar can be said, as I argue in the twin book Homer the Preclassic, about the kharis ‘favor’ returned by the poetry of Homer in the glory days of the Athenian empire. [160]

In book 6 of the Aeneid, Virgil ties the legend of the Trojan hero Aeneas to Roman history.

These are th’ Italian names, which fate will join
With ours, and graff upon the Trojan line….

Silvius is he, thy last-begotten race,
But first in order sent, to fill thy place;
An Alban name, but mix’d with Dardan blood,
Born in the covert of a shady wood:
Him fair Lavinia, thy surviving wife,
Shall breed in groves, to lead a solitary life.
In Alba he shall fix his royal seat,
And, born a king, a race of kings beget.
Then Procas, honor of the Trojan name,
Capys, and Numitor, of endless fame.
A second Silvius after these appears;
Silvius Aeneas, for thy name he bears…

“Now fix your sight, and stand intent, to see

Your Roman race, and Julian progeny.
The mighty Caesar waits his vital hour,
Impatient for the world, and grasps his promis’d pow’r.
But next behold the youth of form divine,
Ceasar himself, exalted in his line;
Augustus, promis’d oft, and long foretold,
Sent to the realm that Saturn rul’d of old;
Born to restore a better age of gold.
Afric and India shall his pow’r obey;
He shall extend his propagated sway
Beyond the solar year, without the starry way,
Where Atlas turns the rolling heav’ns around,
And his broad shoulders with their lights are crown’d.
At his foreseen approach, already quake
The Caspian kingdoms and Maeotian lake:
Their seers behold the tempest from afar,
And threat’ning oracles denounce the war.
Nile hears him knocking at his sev’nfold gates,
And seeks his hidden spring, and fears his nephew’s fates.

Please join us on the thread for the Book Club on Virgil: Aeneid