Home » Featured, Texts, Topic for Discussion » The Daughters of Helios

The Daughters of Helios 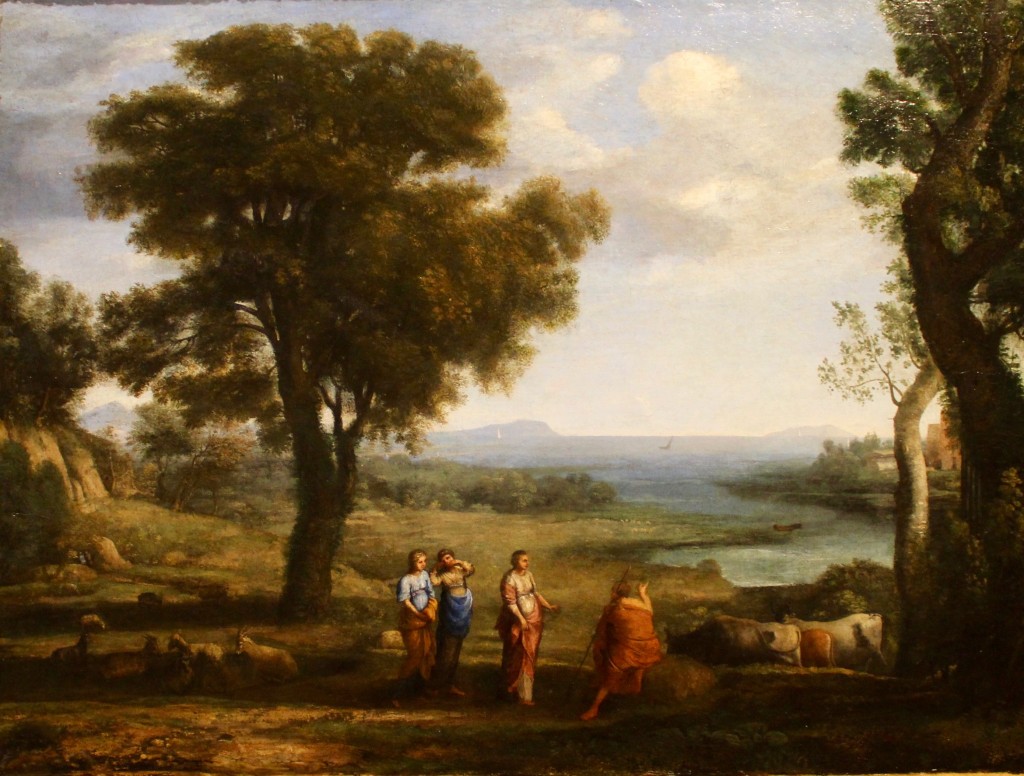 Claude Lorrain, The Daughters of Helios Searching for their Brother Phaeton (1658) Montreal Museum of Fine Arts

I often go to the Montreal Museum of Fine Arts but I did not notice this painting until last month. The painting represents the sisters of Phaeton lamenting for their brother after his tragic death. Different versions may be found about who they are and who is their mother.

The painter, Claude Lorrain got his inspiration from Ovid’s Metamorphoses. However, the story of Phaeton’s sisters, Phaethousa  Φαέθουσα ‘radiance,’ and Lempetia  Λαμπετιη ‘shining,’ the daughters of the sun-god Helios, starts with Homer.

In the Odyssey we learn about the two sisters.

They take care of their father’s cattle. In Homer their mother is Neaira.

[130] with fifty head in each flock. They do not breed, nor do they become fewer in number, and they are tended by the goddesses with sweet hair, Phaethousa and Lampetie, who are children of the sun-god Hyperion by Neaira. Their mother when she had borne them and had done suckling them

[135] sent them to the Thrinacian island, which was a long way off, to live there and look after their father’s flocks and herds. If you leave these flocks unharmed, and think of nothing but getting home [nostos], you may yet after much hardship reach Ithaca; but if you harm them, then I forewarn you of the destruction both

[375] and told him we had been killing his cows, whereon he flew into a great rage, and said to the immortals, ‘Father Zeus, and all you other gods who live in everlasting bliss, I must have vengeance on the crew of Laertes’ son Odysseus’ ship: they have had the insolence to kill my cows, which were the one thing I loved to

[380] look upon, whether I was going up the sky or down again. If they do not square accounts with me about my cows, I will go down to Hadēs and shine there among the dead.’

Nagy in his book Greek Mythology & Poetics writes in Chapter 9 about Phaeton and his sisters. He also quotes a passage from Euripides about the sisters. In this passage, Phaeton’s mother is Klymene.

Phaethon, the story goes, was raised as the son of Merops and Klymene. His real father, however, is not the mortal Merops but the sun-god Helios. At his mother’s behest, Phaethon travels to Aithiopia, the abode of Helios, in a quest to prove that the Sun is truly his father. He borrows the chariot of Helios for a day; driving too near the earth, he sets it afire, Zeus then strikes him dead with his thunderbolt, and Phaethon falls from the sky.

By the banks of this river Eridanos, the Daughters of the Sun mourn for the fallen Phaethon:

Let me lift off, heading for the seawave
of the Adriatic headland and the water of Eridanos,
where the wretched girls, in sorrow for Phaethon,
pour forth into the seething swell
their shining amber rays of tears.

Apollonius Rhodius in book 4 of Argonautica mentions the sisters of Phaeton. He also writes about another myth explaining that the tears come from Apollo.

then again the heroes caught the wind and sped onward; and swiftly they passed the mead of Thrinacia, where the kine of Helios fed. There the nymphs, like sea-mews, plunged beneath the depths, when they had fulfilled the behests of the spouse of Zeus. And at the same time the bleating of sheep came to the heroes through the mist and the lowing of kine, near at hand, smote their ears. And over the dewy leas Phaethusa, the youngest of the daughters of Helios, tended the sheep, bearing in her hand a silver crook; while Lampetia, herding the kine, wielded a staff of glowing orichalcum 1408 as she followed. These kine the heroes saw feeding by the river’s stream, over the plain and the water-meadow; not one of them was dark in hue but all were white as milk and glorying in their horns of gold. So they passed them by in the day-time, and when night came on they were cleaving a great sea-gulf, rejoicing, until again early rising dawn threw light upon their course.

Thus Argo cried through the darkness; and the sons of Tyndareus uprose, and lifted their hands to the immortals praying for each boon: but dejection held the rest of the Minyan heroes. And far on sped Argo under sail, and entered deep into the stream of Eridanus; where once, smitten on the breast by the blazing bolt, Phaethon half-consumed fell from the chariot of Helios into the opening of that deep lake; and even now it belcheth up heavy steam clouds from the smouldering wound. And no bird spreading its light wings can cross that water; but in mid-course it plunges into the flame, fluttering. And all around the maidens, the daughters of Helios, enclosed in tall poplars, wretchedly wail a piteous plaint; and from their eyes they shed on the ground bright drops of amber. These are dried by the sun upon the sand; but whenever the waters of the dark lake flow over the strand before the blast of the wailing wind, then they roll on in a mass into Eridanus with swelling tide. But the Celts have attached this story to them, that these are the tears of Leto’s son, Apollo, that are borne along by the eddies, the countless tears that he shed aforetime when he came to the sacred race of the Hyperboreans and left shining heaven at the chiding of his father, being in wrath concerning his son whom divine Coronis bare in bright Lacereia at the mouth of Amyrus. And such is the story told among these men. But no desire for food or drink seized the heroes nor were their thoughts turned to joy. But they were sorely afflicted all day, heavy and faint at heart, with the noisome stench, hard to endure, which the streams of Eridanus sent forth from Phaethon still burning; and at night they heard the piercing lament of the daughters of Helios, wailing with shrill voice; and, as they lamented, their tears were borne on the water like drops of oil.

In Ovid’s Metamorphoses, the story of Phaeton and his sisters is retold, but at the end , the sisters are metamorphosed into trees. Roman ladies wear amber jewelry made with the amber formed out of the tears of the sisters of Phaeton. We also have the mention of “amber rays of tears” in the quote from Euripides above. The mother of Phaeton is Klymene (Clymene).

Ovid’s Metamorphoses was written during the Augustan period. He lived during the same period as Virgil and Horace. He was very popular, but was sent into exile by Augustus. You may find more information about Ovid here, in Todd M. Compton, Victim of the Muses: Poet as Scapegoat, Warrior and Hero in Greco-Roman and Indo-European Myth and History, Chapter 23. Ovid: Practicing the Stadium Fatale.

Jove, having reached that summit, stood and poised
in his almighty hand a flashing dart,
and, hurling it, deprived of life and seat
the youthful charioteer, and struck with fire
the raging flames— and by the same great force
those flames enveloping the earth were quenched,
and he who caused their fury lost his life.

Frantic in their affright the horses sprang
across the bounded way and cast their yokes,
and through the tangled harness lightly leaped.
And here the scattered harness lay, and there
the shattered axle, wrenched from off the pole,
and various portions of the broken car;
spokes of the broken Wheel were scattered round.

And far fell Phaethon with flaming hair;
as haply from the summer sky appears
a falling star, although it never drops
to startled earth.—Far distant from his home
the deep Eridanus received the lad
and bathed his foaming face. His body charred
by triple flames Hesperian Naiads bore,
still smoking, to a tomb, and this engraved
upon the stone; “Here Phaethon’s remains
lie buried. He who drove his father’s car
and fell, although he made a great attempt.”

Filled with consuming woe, his father hid
his countenance which grief had overcast.
And now, surpassing our belief, they say
a day passed over with no glowing sun;—
but light-affording flames appeared to change
disaster to the cause of good.

Amazed,
the woeful Clymene, when she had moaned
in grief, amid her lamentations tore
her bosom, as across the world she roamed,
at first to seek his lifeless corpse, and then
his bones. She wandered to that distant land
and found at last his bones ensepulchred.
There, clinging to the grave she fell and bathed
with many tears his name on marble carved,
and with her bosom warmed the freezing stone.

And all the daughters of the Sun went there
giving their tears, alas a useless gift;—
they wept and beat their breasts, and day and night
called, “Phaethon,” who heard not any sound
of their complaint:—and there they lay foredone,
all scattered round the tomb.

The silent moon
had four times joined her horns and filled her disk,
while they, according to an ancient rite,
made lamentation. Prone upon the ground,
the eldest, Phaethusa, would arise
from there, but found her feet were growing stiff;
and uttered moan. Lampetia wished to aid
her sister but was hindered by new roots;
a third when she would tear her hair, plucked forth
but leaves: another wailed to find her legs
were fastened in a tree; another moaned
to find her arms to branches had been changed.
And while they wondered, bark enclosed their thighs,
and covered their smooth bellies, and their breasts,
and shoulders and their hands, but left untouched
their lips that called upon their mother’s name.
What can she do for them? Hither she runs
and thither runs, wherever frenzy leads.
She kisses them, alas, while yet she may!

But not content with this, she tried to hale
their bodies from the trees; and she would tear
the tender branches with her hands, but lo!
The blood oozed out as from a bleeding wound;
and as she wounded them they shrieked aloud,
“Spare me! O mother spare me; in the tree
my flesh is torn! farewell! farewell! farewell!”
And as they spoke the bark enclosed their lips.

Their tears flow forth, and from the new-formed
boughs
amber distils and slowly hardens in the sun;
and far from there upon the waves is borne
to deck the Latin women.

Neaera was an Oceanid, so was Klymene. Klymene was the mother of the Heliades, the seven daughters of Helios. Are there different myths surrounding the names of these daughters and their origins? What are these myths and what do they mean? Is Phaeton always named as their brother? Please join me in the Forum.