The Mountain Gods and Musical Contests

It is odd, that a culture that seems to personify every river, creek, lake, spring, meadow, vale, city, region, and sea with a deity shows so little knowledge of the gods of the mountain peaks. The Hesiodic Theogony lists none of the mountains by name and expends only one line of poetry addressing this. By contrast, it names forty-one of the three thousand Oceanides in thirty-six lines. (Theogony, 337 and following) There seem to be only ten mountains called “god.”  These are Helikon, Nysos, Parnes, and Cithaeron, of Dorian Boeotia; Olympus of Thessalia, home of the gods; Olympus of Phrygia; Oreios of Mount Othrys; Athos of Thrake; Aetna, the volcano of Sicily; and Tmolus, a mountain of Lydia [1].

“…wide-spread, tawny Helicon” [4] stands in western Boeotia near Phocis, between Lake Copais and the Gulf of Corinth [5]. “Helicon is one of the mountains of Greece with the most fertile soil and the greatest number of cultivated trees. The wild-strawberry bushes supply to the goats sweeter fruit than that growing anywhere else.” [6] He appears to be childless and is the dancing ground of the Muses (along with Apollo, the Graces and their mother Mnemosyne [7], who reigns over the hills of Eleuther [8].) The Muses were originally local goddesses at Helikon, but eventually became pan-Hellenic goddesses associated with Olympus. [9]

According to Ovid, the mountain was also the site of a singing contest between the Muses and Pierides judged by the local nymphs called the Libethrides. The Pierides were the nine mortal daughters of Pierus, King of Emathia. The Muses were the nine divine daughters of Zeus representing the arts and sciences [8]. The Pierides bet the Muses they were better singers, the challenge was accepted, and the local nymphs were selected as judges, who “took the oath by their own streams, and sat on benches shaped form living stone.” [10]

Fiorentino: The Contest of the Pierides

The leader of the Pierides chorus “sang of the great war in heaven, ascribing spurious prowess to the Giants, belittling all the exploits of the gods: how Typhon, issuing from earth’s lowest depths, struck terror in those heavenly hearts, and they (the Olympians) all turned their backs and fled” (Ovid Metamorphoses 5.319–323 [11]).  Zoe Stamatopoulou points out that the Pierides pick a song belittling the gods in an attempt to bridge the distance between gods and men, thus attaining divine honors for themselves [12].  From my reading, this appears to be a “shame” song in a shame/praise culture. (See The Best of the Achaeans by Gregory Nagy, Chapter 14.) As usual, challenging the gods didn’t work out too well for the mortals.

Excellent, clear-voiced [13] white-armed [14] Calliope who is the chief and eldest of all the Muses [15] arises and “sings the  tale of the abduction of Persephone.” (Ovid Metamorphoses 5.341 [16]), followed by a song about Arethusa, and another about Triptolemus and Lyncus (5.341–661). “Heaven, the stars, the sea and rivers stood still, while Mount Helicon, beguiled by the pleasure of it all, swelled skyward till, by the will of Poseidon, Pegasus checked it by striking the summit with his hoof” (Antoninus Liberalis Metamorphoses 9 [17]).

Calliope sings; the nymphs unanimously declare the Muses the winners. The Muses, are as usual, ungracious in victory and turn the mortals into various birds. (Ovid Metamorphoses 5.662–678 [18]) 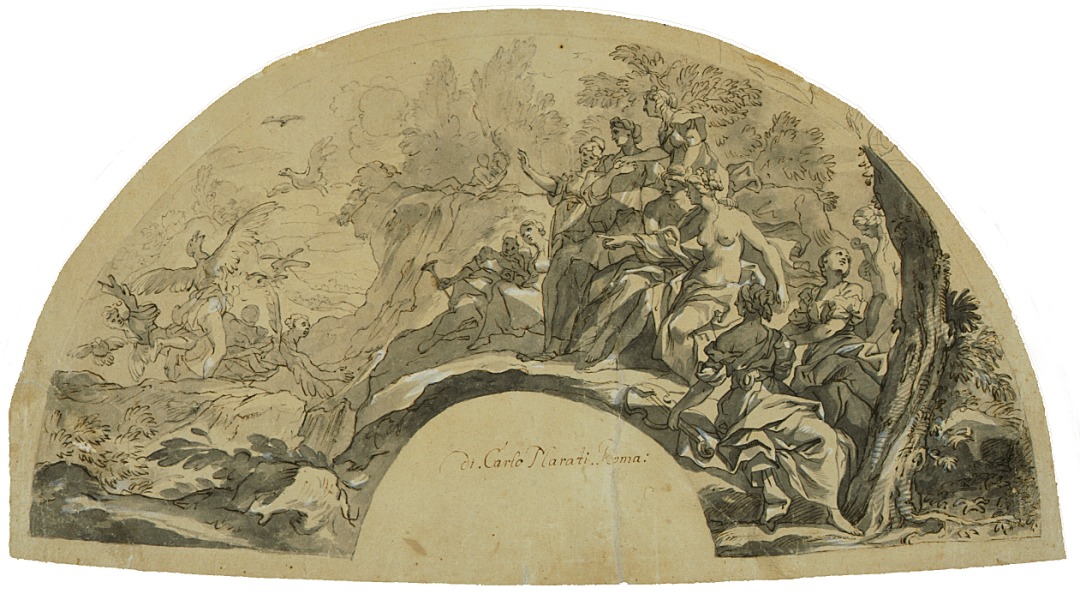 Piola: The Pierides Transformed by the Muses into Magpies

Cithaeron in the form of a man laments the woes soon to occur on his slopes, and he wears an ivy crown (of Dionysus) aslant on his head—for he accepts the crown most unwillingly.
(Philostratus the Elder, Imagines 1.14 [19])

Cithaeron is a mountain-god and his mountain range is in central Greece: “[T]he…hollow plains [of Boetia]…are surrounded everywhere on the east and west by mountains….on the west, Cithaeron inclines, obliquely, a little above the Crisaean Sea; it begins contiguous with the mountains of Megara and Attica, and then makes a bend towards the plains, and terminates near the Theban territory.” [20]. Aaron Atsma suggests the mountain-god is Nysos, the foster-father of Dionysus [21]. He appears to be childless. His slopes are the site of many of the tragedies befalling the house of Cadmus and visited by the Erinys Tisiphone. The god suggested the supposed marriage of Zeus and Plataea, nymph of the region and daughter of the river god Asopos, a mock marriage at which, when the jealous Hera arrived and ripped the wedding veil from the bride, she discovered a wooden image instead of a nymph. [22]

A fragment by the poetess Corinna describes a musical contest between Mount Helikon and Mount Cithaeron. All we know is that Cithaeron took up the lyre and sang in honor of the goddess Rhea, mother of Zeus. The Muses called for a vote by all the blessed gods and Hermes declared Cithaeron the victor: “with wreaths…the blessed gods crowned him and his mind rejoiced.  But filled with harsh grief Helicon (ripped out) a bare rock and…hurled it from on high into myriad stones.” (Corinna, Fragment 654 [23]) Although we have no record of what Mount Helikon sings, Derek Collins  suggests that “Corinna can be seen cleverly to oppose a local Boeotian variant against a Panhellenic version centered on Ida.” [24] I note that the god Cithaeron sang accompanied by the lyre while the mountain-god Helikon is more famous for choral music. Maybe by definition kitharoedic music is the winner on Cithaeron. 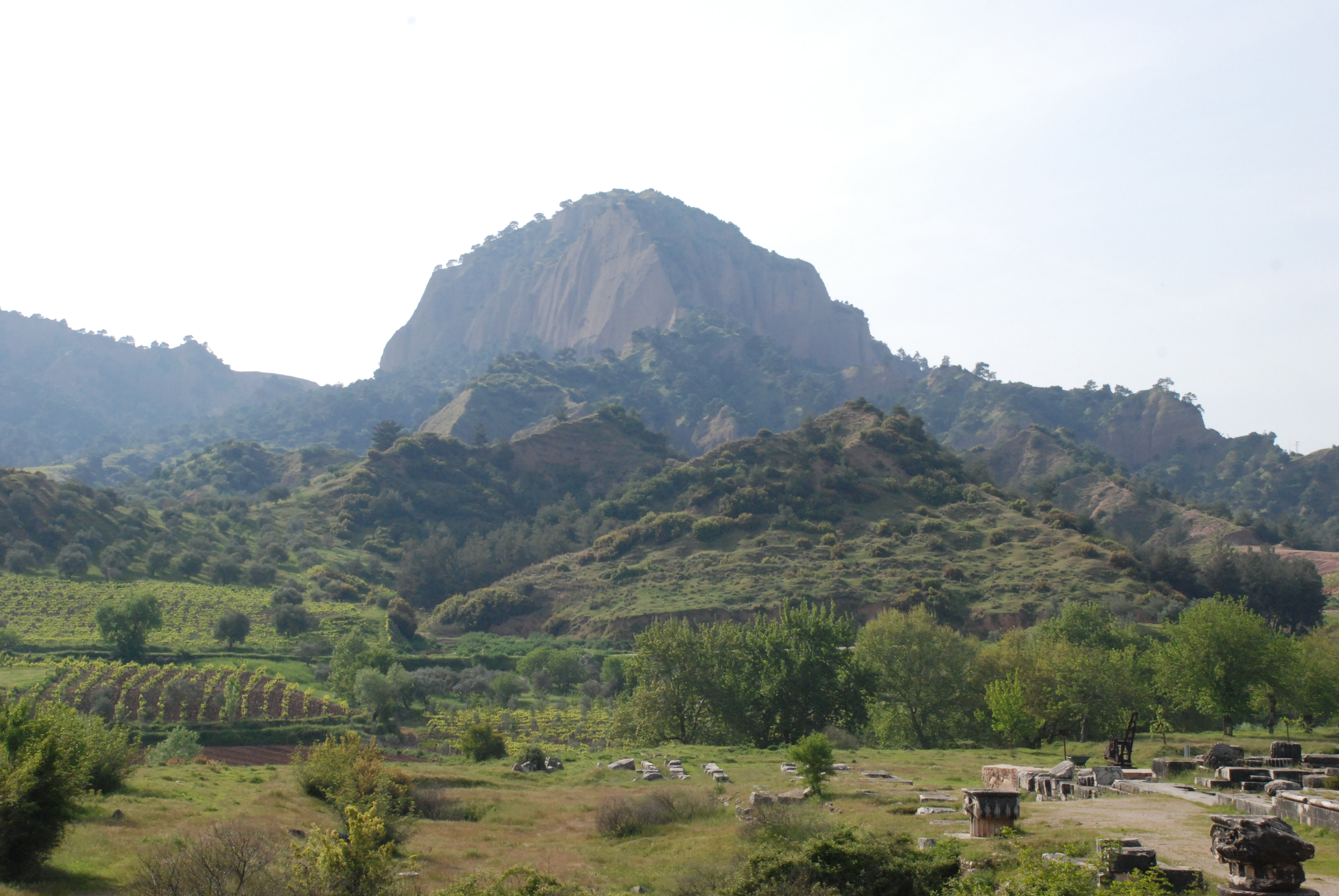 “The crags of Tmolos, steep and wide and high, gazing across the sea, at one side fall to Sardis, at the other reach their end at small Hypaepae.”
Ovid, Metamorphoses 11.150. [25] 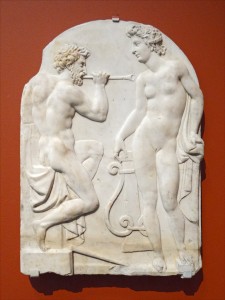 Some sources describe “the god of Mount Tmolus in Lydia … as husband of Pluto (or Omphale) and father of the Tantalus” [26]. Mount Tmolus was the site of a musical contest between Apollo on lyre and Pan [26] (or Marsyas, son of Olympus [27]) on pipes. The mountain god is one of the judges and gives the victory to Apollo.[28]  In the version with Pan, no great tragedy seems to follow, but in the case of Marsyas’ defeat he is skinned alive by the ungracious Loxias [27]  “The fable evidently refers to the struggle between the citharoedic and auloedic styles of music, of which the former was connected with the worship of Apollo among the Dorians, and the latter with the orgiastic rites of Cybele (Rhea) in Phrygia.” [29]

I can gain no inspirational  insights from this survey and in finishing can only add a few more details and close with a table. The ancient Greeks apparently had three different musical modes having to do with musical scales and tuning an instrument. They are Dorian, Lydian, and Phrygian, [30] and are associated with Helikon and Cithaeron, Tmolus and Olympus. [31]  Echo, an oread [=mountain nymph] of Cithaeron, has myths set on Helikon. And the winning lyrics always honor a goddess.

I have long wondered if the relative absence of mountain gods was somehow tied to the demise of giants? Though giants as mountain gods might make a nice fit I found no mention of this in Greek literature. Aaron Atsma, with due references, lists a giant named Olympos [32], but this one is of Cretan origins with no indication of mountain associations or attributes. Is it possible that the mountain gods we know are the remains of the gigantic race defeated by the Olympians after the Titanomachy? Why did all the singing contests seem to be honoring goddesses? Any thoughts, please join in discussion on the forum.

Bill Moulton is a life-long independent researcher in Greek Mythology, starting in fourth grade when his fondness for the topic threw off the grading curve.  Bill is a graduate of HeroesX and active with Hour 25. He blogs and tweets on Classical Studies. He and wife of twenty-five years, Pat, are the proud grandparents of four wonderful young people. 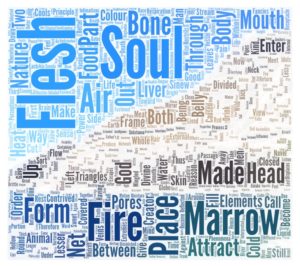