Home » Connections for Further Study, Featured » Shields in Iliad and the Use of Metals

Shields in Iliad and the Use of Metals

…He [Agammenon] took moreover the richly-wrought shield that covered his body when he was in battle—fair to see, with ten circles of bronze running all round it. On the body of the shield there were twenty bosses of white tin, [35] with another of dark lapis in the middle: this last was made to show a blank-eyed Gorgon’s head, fierce and grim, with Rout and Panic on either side. The band for the arm to go through was of silver, on which there was a writhing snake of lapis with three heads [40] that sprang from a single neck, and went in and out among one another. 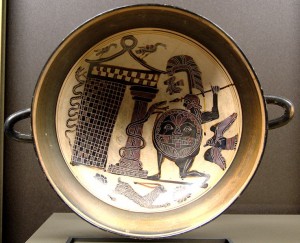 The Homeric Iliad showcases ‘shields’ as an important part of suiting up for battles, as part of the spoils of war and as examples of fine craftsmanship. Shields are made of gold, bronze, cowhides or some combination of all three. They are handed down as souvenirs or forcefully taken as war prizes. They are crafted to protect and reflect the status of the owner. They can also give clues about the general timeframes depicted in the ancient epic.

The Shield of Achilles

The most recognizable shield of the Iliad belongs to Achilles. The special shield was crafted by Hephaistos at the request of Achilles’ mother Thetis.

|475…First he shaped the shield so great and strong, adorning it all over and binding it round[480] with a gleaming circuit in three layers; and the baldric was made of silver. He made the shield in five thicknesses, and with many a wonder did his cunning hand enrich it. He wrought the earth, the heavens, and the sea; the moon also at her full and the untiring sun, [485] with all the signs that glorify the face of the heavens—the Pleiades, the Hyades, huge Orion, and the Bear, which men also call the Wagon and which turns round ever in one place, facing Orion, and alone never dips into the stream of Okeanos.[490] He wrought also two cities, fair to see and busy with the hum of men. In the one were weddings and wedding-feasts, and they were going about the city with brides whom they were escorting by torchlight from their chambers. Loud rose the cry of Hymen, [495] and the youths danced to the music of pipe and lyre, while the women stood each at her house door to see them. 497 Meanwhile the people were gathered in assembly, and there a quarrel [neikos] 498 had arisen, and two men were quarreling [neikeîn] about the blood-price [poinē] 499 for a man who had died. One of the two claimed that he had the right to pay off the damages in full, [500] declaring this publicly to the population of the district [dēmos], and the other of the two was refusing to accept anything.

A rendition of Achilles’ shield.

Much has been written about Achilles’ shield. You can review Chapter 4 of Homeric Responses, “The Shield of Achilles: Ends of the Iliad and Beginning of the Polis”

Ajax came up bearing his shield in front of him like a wall—[220] a shield of bronze with seven folds of ox-hide—the work of Tykhios, who lived in Hyle and was by far the best worker in leather. He had made it with the hides of seven full-fed bulls, and over these he had set an eighth layer of bronze.

And tall Hector of the glancing helmet answered, “Noble Ajax, son of Telamon and seed of Zeus, chief of the army of warriors, [235] treat me not as though I were some puny boy or woman that cannot fight. I have been long used to the blood and butcheries of battle. I am quick to turn my leather shield either to right or left, for this I deem the main thing in battle. [240] I can charge among the chariots and horsemen, and in hand to hand fighting can delight the heart of Ares; howbeit I would not take such a man as you are off his guard—but I will smite you openly if I can.” He poised his spear as he spoke, and hurled it from him. [245] It struck the sevenfold shield in its outermost layer—the eighth, which was of bronze—and went through six of the layers but in the seventh hide it stayed.

…Achilles in his turn threw, and struck the round shield of Aeneas[275] at the very edge, where the bronze was thinnest; the spear of Pelian ash went clean through, and the shield rang under the blow;…

The use of different materials in shield construction was discussed in the Online Open House with Casey Dué. In her discussion, she mentioned E.S. Sherratt’s paper ‘Reading the texts’: archaeology and the Homeric question, in which Sherratt refers to the descriptions and makings of spears and shields in metals from the Bronze Age and Iron Age.

While these oddities have often been dismissed as examples of the inconsistencies and discrepancies one might expect in poetry simultaneously composed and recited orally, the archaeological record suggests that what we have in each case is the juxtaposition or superimposition of more than one chronological reflection. Taking iron first, the development of iron use and technology – and resulting cultural attitudes to iron – show a relatively clear pattern in the Aegean. 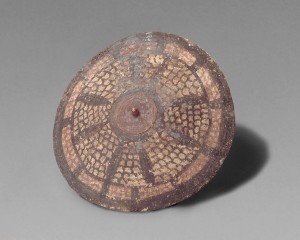 Please join in the Forum to discuss the other famous shields and their owners. How do they fit in Sherratt’s analysis?

Janet M. Ozsolak is a member of Hour 25 and a participant in HeroesX.