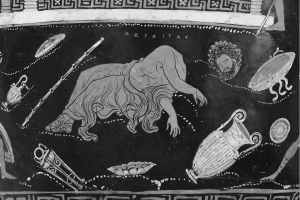 He is one of those bit players in Homer who are so unforgettable. Caustic, repulsive, and comedic all at the same time, Thersites has always been the source of controversy. Who was he? And was he intended to be dangerously insurrectionist or only entertaining?

It is an often overlooked aspect of the Thersites story that he was said by post-Homeric tradition to have been a cousin of Diomedes. Along with his brothers, Thersites had been involved in a conspiracy in Calydon to overthrow  King Oeneus, the elderly father of Tydeus. That put Thersites at odds with the king’s grandson Diomedes in some of the minor skirmishes that took place during the time between the Seven Against Thebes and the Epigoni.[1]. This was the likely basis for Eustathius’ comment that Thersites was recruited for the Trojan War because of the danger of his leading an insurrection if he were left at home.[2]  Diomedes does not figure in Homer’s depiction of Thersites’ verbal assault against the other Greek leaders in Scroll 2 of the Iliad.

There are some reasons to question whether Homer is portraying that same person in Scroll 2. Kirk’s commentary points out that Homer’s Thersites is the only character in the Iliad who lacks both a patronymic and a place of origin.[3] This lack of ancestry has led to frequent description of Homer’s Thersites as the voice of the common soldier: “In general then he is seen as the loud-mouthed common soldier who has made himself unpopular both with the leadership and his fellow soldiers by his verbal attacks on the leaders.”[4]

But there are other indications that Homer’s Thersites is not just a minor soldier drawn from the rank and file. By his own admission at Iliad 2.231, he was responsible for capturing and ransoming Trojan prisoners, a role that Kirk says would have been played by “front fighters,” or named nobility, rather than members of the multitude.  Also, the very fact that he had standing to speak before the assembled Greek forces shows that he was not just a common soldier, whose role in assemblies would have been no more than shouting assent upon appropriate cues.[5] These considerations argue for Thersites being of higher rank and for the lack of stated ancestry being one of Homer’s ways of intentionally diminishing a known character.[6]

Another way of diminishing a character is by making his physical appearance repulsive. There is nothing attractive about either looking at or listening to Thersites. He is given one of the most detailed physical descriptions of any character in Homer, and the resulting caricature makes him rather like a cartoon character. Here is how Homer introduces him:

The rest now took their seats and kept to their own several places, but Thersites still went on wagging his unbridled tongue—a man of many words, and those unseemly; a monger of sedition, a railer against all who were in authority [kosmos], who cared not what he said, so that he might set the Achaeans in a laugh. He was the ugliest man of all those that came to Troy—bandy-legged, lame of one foot, with his two shoulders rounded and hunched over his chest. His head ran up to a point, but there was little hair on the top of it…[He spoke] with a shrill squeaky voice.
(Iliad 2.211–222, Sourcebook)

His physical disability is reminiscent of Hephaestus, and his ugliness puts him in a category with others who would later speak the truth to power, including Aesop, Diogenes, and Socrates. 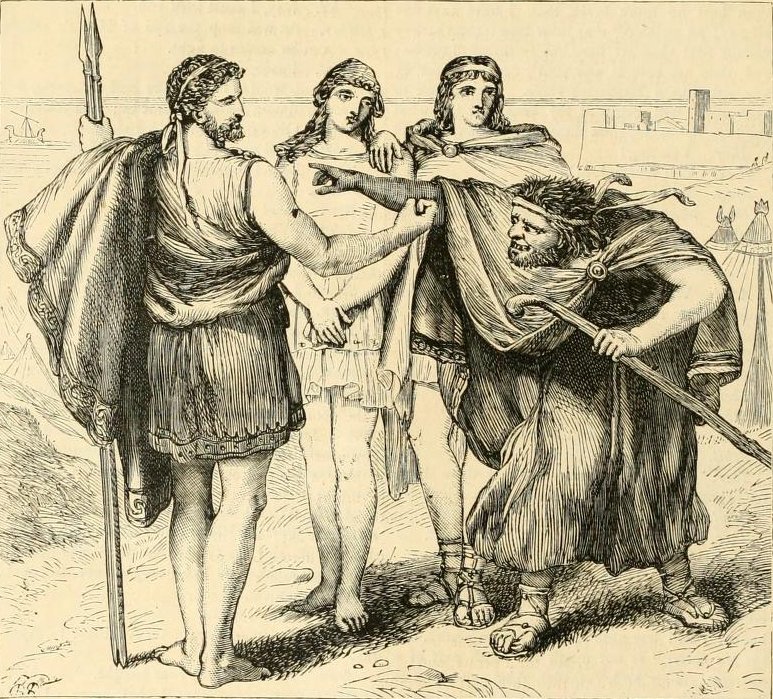 Even though Thersites’ words are disordered, caustic, and bitter, the overall effect of the episode is certainly comedic. But the humor comes at whose expense?  At his own? Or at Agamemnon’s? Or at the system of military discipline that required unquestioning obedience from soldiers?  There is a great irony here in the discrepancy between Thersites’ effort to get laughs at 2.214-215 (“who cared not what he said, so that he might set the Achaeans in a laugh”) and when the heartiest laugh actually comes at 2.270, i.e. when Thersites is brutally beaten by Odysseus: “The people were sorry for him, but they laughed heartily.”

Another humorous aspect of the episode is that Thersites’ charges against Agamemnon are what everyone knows to be true, but can’t say. He addresses first Agamemnon and then his fellow soldiers:

Agamemnon,” he cried, “what ails you now, and what more do you want? Your tents are filled with bronze and with fair women, for whenever we take a town we give you the pick of them. Would you have yet more gold, which some Trojan is to give you as a ransom for his son, when I or another Achaean has taken him prisoner? or is it some young girl to hide and lie with? It is not well that you, the ruler of the Achaeans, should bring them into such misery.

“Weakling cowards, women rather than men, let us sail home, and leave this man here at Troy to stew in his own prizes of honor, and discover whether or not we were of any service to him. Achilles is a much better man than he is, and see how he has treated him—robbing him of his prize and keeping it himself. Achilles takes it meekly and shows no fight; if he did, son of Atreus, you would never again insult him.
(Iliad 2.225–244, Sourcebook)

This vituperative assault on Agamemnon is in accord with the overall picture that Homer paints of the commander-in-chief throughout the poem. In his Introduction to The Anger of Achilles, Robert Graves speculated that Homer might have portrayed Thersites as such a ridiculous figure “to dissociate himself from [his] sentiments.” On the surface Thersites is such a buffoon that nobody would be expected to take him seriously, so the poet (and his bards) are playing it safe. But at the same time Homer is winking at us in sub rosa agreement with much of what Thersites says.

Thersites is not the only—or even the primary—character in the poem who dangerously flirts with insurrection. So does the poem’s hero Achilles, who but for Athena’s intervention would have killed Agamemnon in Scroll 1. Parallels between the two characters are unmistakable. Like Thersites Achilles challenges Agamemnon’s leadership and questions the value of a senseless war in which he has no personal stake. Later in the poem he too will threaten to go home and predicts that he will be missed. Some of Thersites’ words, such as 2.235–238, could have been spoken by Achilles: “Weakling cowards, women rather than men, let us sail home, and leave this man here at Troy to stew in his own prizes of honor, and discover whether or not we were of any service to him.”

To be sure there were also many common soldiers among the Achaean forces who were sick of the war and more than ready to go home. When Agamemnon foolishly decided to test the troops with his suggestion that the troops pack up and prepare to return home, there was a mad dash for the ships that showed how poor morale was after the ten-year siege. Thersites understood the attitude of the men better than the Greek leaders did.

It took both of Homer’s main heroes to put an end to Thersites. Homer tells us at 2.220 that “he was hateful to Achilles and Odysseus most of all, for it was with them that he used to wrangle the most.” Both heroes had to contend with and eventually subdue the rebellious spirit represented by Thersites.

Odysseus’ turn came first. At 2.254–267 he beat Thersites into submission, interestingly using Agamemnon’s scepter. Odysseus there calls Agamemnon “the shepherd of the people,” implying that the rank and file should dumbly follow their leader, even though he has received a disproportionate share of the prizes:

How dare you berate Agamemnon, son of Atreus, shepherd of the people, because the Danaans have awarded him so many prizes? I tell you, therefore—and it shall surely be—that if I again catch you talking such nonsense, I will either forfeit my own head and be no longer called father of Telemachus, or I will take you, strip you stark naked to reveal your shame [aidōs], and whip you out of the assembly till you go blubbering back to the ships.”

Then he beat him with his staff about the back and shoulders till he dropped and fell weeping. The golden scepter raised a bloody welt on his back, so he sat down frightened and in pain, looking foolish as he wiped the tears from his eyes.
(Iliad 2.254–267, Sourcebook)

The notion of revealing Thersites’ misshapen body and—unusual for Homer—his genitals must have been especially jarring for audiences of the time.

Ovid tells us that, much later, when Odysseus needed to make his case as deserving to be awarded Achilles’ armor, he recalled this episode:

Then Agamemnon called for an assembly of the Greek alliance, still panic-stricken; not even then was Ajax bold enough to make a peep, although Thersites dared to mock the kings with insubordination—but thanks to me, he didn’t get off lightly! I got up and exhorted them once more to take the battle to our enemy, replacing their lost courage with my speech.
(Ovid, Metamorphoses 13.230–238, translated by C. Martin) 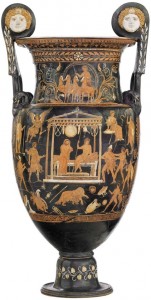 Achilles’ turn to deal with Thersites came after the time frame of the Iliad. According to Proclus’ summary of the Aithiopis, Achilles eventually killed Thersites for having ridiculed his love for Penthesilea, the Amazon warrior.

The Amazon Penthesileia, daughter of Arēs and Thracian by birth, comes to Troy as an ally of the Trojans. In the middle of her aristeiā, Achilles kills her and the Trojans arrange for her funeral.  Thersites, reviling and reproaching Achilles by saying that he loved Penthesileia, is killed by Achilles. From this a quarrel arises among the Achaeans about Thersites’ murder. After this, Achilles sails to Lesbos, sacrifices to Apollo, Artemis, and Leto and is purified of the murder by Odysseus.
(Proclus’ Summary of Aithiopis 1–7,  Sourcebook)

There are other references from the classical period to the story of the killing of Thersites by Achilles. The fourth-century BCE dramatist Chaeremon wrote a lost tragedy alternately entitled either Thersites or Achilles Thersitoktonos.[7] The vase pictured above, from about 340 BCE, depicts the scene of the murder as outlined in the summary of the Aithiopis and possibly as portrayed in Chaeremon’s play (although with a surfeit of characters for a tragedy). A figure labelled as Thersites lies prone, having been decapitated by Achilles. In apparent assumption that Thersites was related to Diomedes, the latter steps forward drawing his sword as if to avenge the killing of his kinsman. [8]

Thersites continued to suffer abuse through classical times and beyond. In the Myth of Er, Plato has Thersites return in a future life as an ape: “And far out among the last he saw the soul of the buffoon [γελωτοποιοῦ, gelōtopoios] Thersites clothed as an ape” (Republic X at 620c).

Alas, poor Thersites! Lucian of Samosata says that, once in the Underworld, all that he could do to salvage his reputation was to sue Homer for libel (The True History, 2.20).

[6] Postlewaite has observed that the later attribution of Thersites’ ancestry to the same family as Diomedes might have been a way of filling in the gap left by Homer. Op. cit., pp. 125–126.

H.C. Selous: illustration from Troilus and Cressida Act II Scene i,  from Plays of Shakespeare volume 3, edited by Charles and Mary Cowden Clarke, page 20, on archive.org