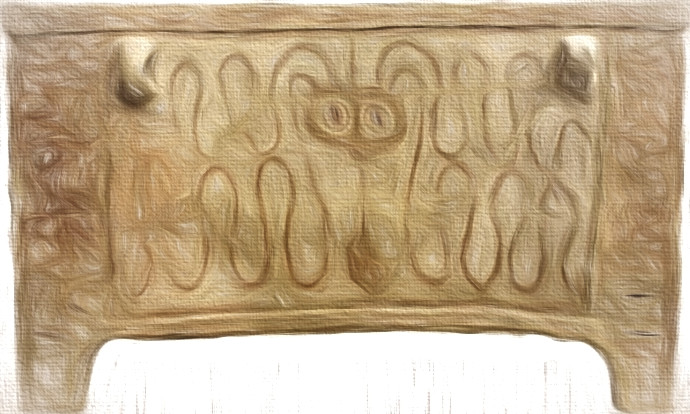 In the discussion forum, we observed that Doric and Mycenaean elements came back quite openly in the geometric art of the Homeric age. The decorative band of alternating “triglyphs” [τρίγλυφος] and “metopes” [μετόπη] on the sides of the Middle Geometric kraters were recognized as a memory of the wooden constructions in ancient Doric temples. In a similar way the Mycenaean elements return in the images of animals that are grazing or resting. What is missing is the memory of the Minoan element, some signs of a culture that vanished completely. Or not?

Before discussing proto-geometric art, we looked at the motif of the Minoan octopus [ὀκτώπους]. I would like to do that again because I feel that there is a connection with the decorative system of the Geometric period. Should it be that way, then Geometric art appears to me as a synthesis of Doric, Mycenaean and Minoan elements and such a diversity brings to life, for me, the idea of “structured beauty” [kosmos, κόσμος] and symmetry, “due proportion” [symmetria, συμμετρία], in which “the parts relate to other parts as the parts do to the total”.

The octopus is known for its complex ever-changing quality[1]: it will change its color to look like the soil underneath it. It tears its arms off when someone plucks it from its bed and the stones come up along with it.[2] The octopus regrows its lost arms and it is worse than that: when an octopus is really hungry it will eat its own arm.[3] And it relates to the sea. No wonder that this mollusc [malakia, μαλάκια] became the symbol of regenerative power.[4]

The motifs of the octopus first appear on seals and later, in the Post-palatial period, as a decoration on clay coffins [larnakes, λάρνακες], indicating that the marine-style decoration had a meaning that was symbolic and ritual. On the mainland the octopus appeared on Late Helladic, Mycenaean, pottery. In a shaft grave at Mycenae gold foil ornaments were found in the shape of shrines, naked goddesses, octopuses, butterflies, rosettes: symbolic ornaments that were to be stitched onto ritual costumes.[5] Quite possibly both the pottery and the gold foil ornaments were Minoan imports, or imitations.

The larnax [λάρναξ] is a small ceramic coffer often used as a container for human remains. Predominantly they were decorated with octopuses, squids, fish, argonauts, even ships. A beautiful example (not shown) is the one from Kavrochori, which is near modern Heraklion. The painted decoration mixes conceptual motifs that relate to the sea (octopuses, squids, fish, and dolphins) with creatures from marshes and rivers (reeds, palms, papyri, ducks): these last motifs are possibly inspired by Egyptian or Near Eastern prototypes in which rivers equal fertility.

Another example is a larnax that is maintained at the Archaeological Museum of Rethymnon, Crete. The paintings on this coffer show papyrus flowers on the left panel and on the lid, and an octopus on the right. Not shown, but on some of the larnakes, fish are painted on the interior surfaces. 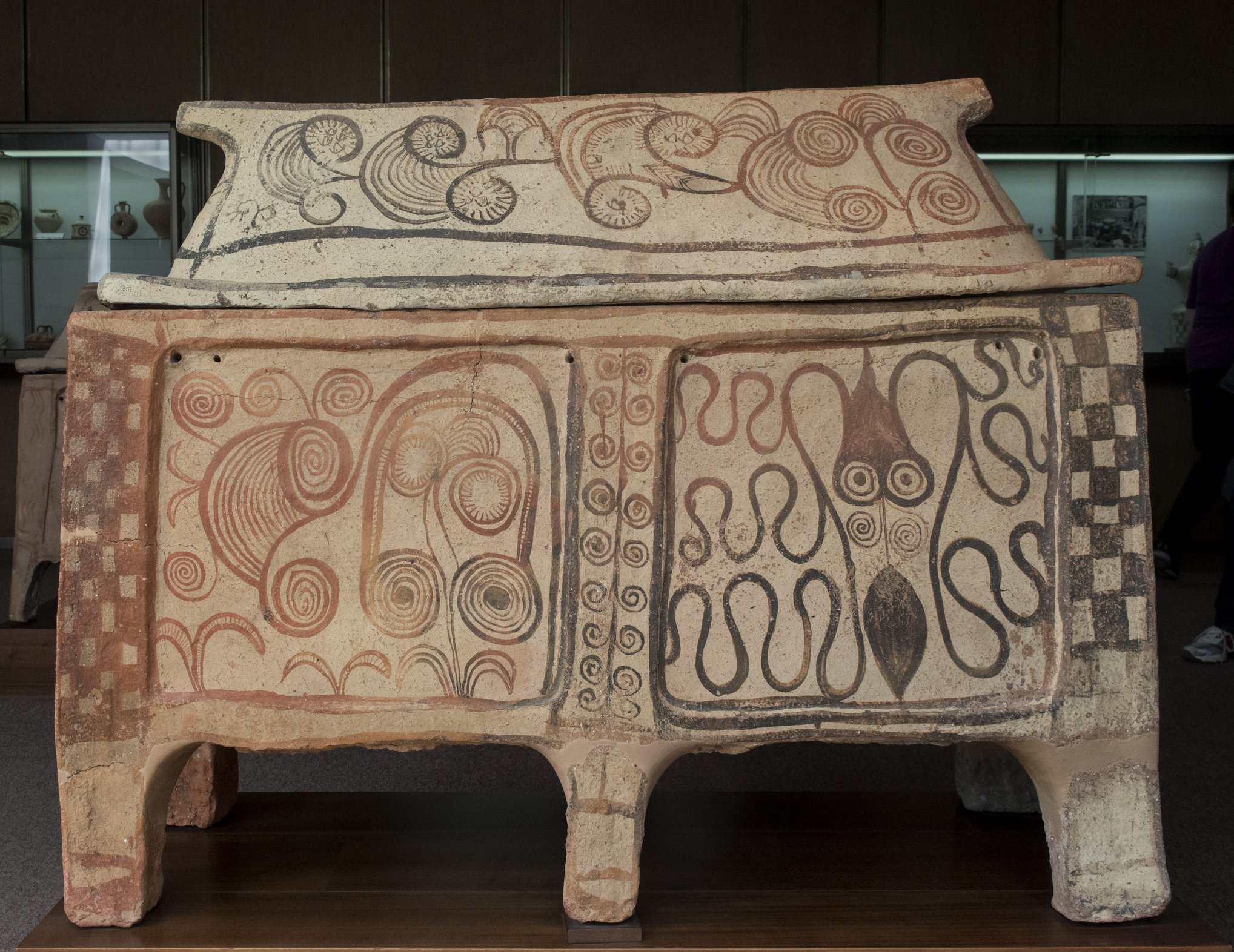 The fish painted on the interior surfaces of the larnakes may indicate the sea, maybe as a symbol for the beyond.[6] The symbolism of the octopus on the outside of the coffin may be connected with the idea of regeneration after death.

The decoration in the second image shows an octopus in a more abstracted form, but for the purpose of this discussion it shows the octopus in a form that approximates the meander: a continuous line, shaped into a repeated motif. Could this meander, that is seen in the decoration of many larnakes, be the missing Minoan element in geometric art? 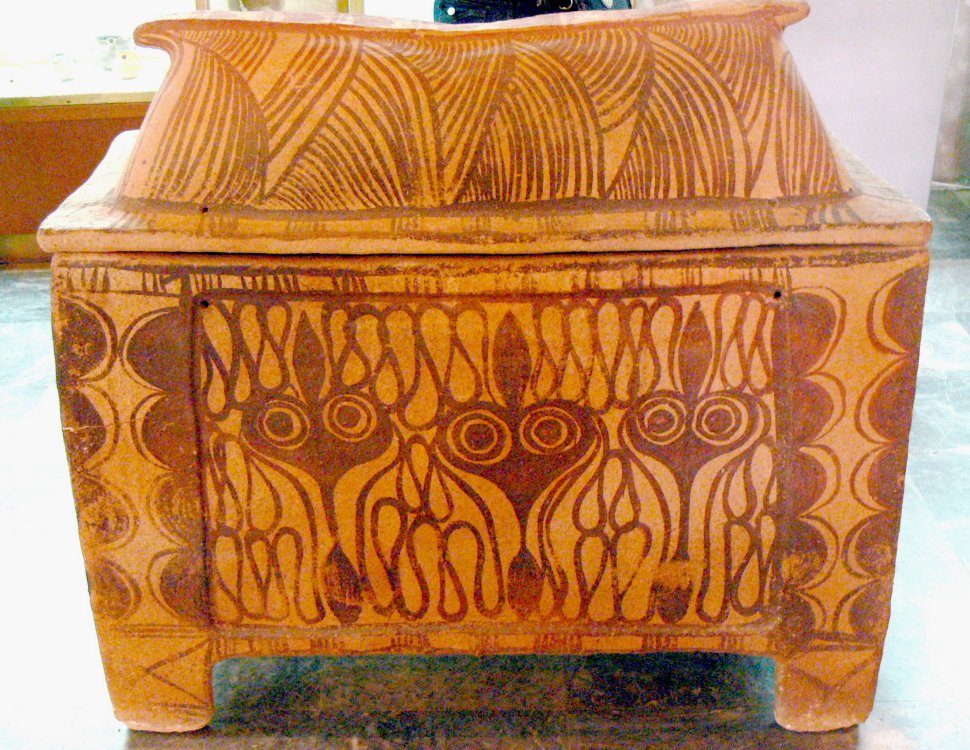 Please join me in the forum to continue the discussion.

References:
[1] “Have the temperament of a complex octopus, who always looks like whatever rock he has just clung to.” (Theognis of Megara 215, Sourcebook)
[2] “…but presently the wave came on again and carried him back with it far into the sea—tearing his hands as the suckers of an octopus are torn when someone plucks it from its bed, and the stones come up along with it” (Odyssey 5.430–433, Sourcebook)
[3] “It was a common belief that the octopus would eat its own ‘foot’ when it was starving. West WD commentary p. 289 comments: ‘The starved man squeezing his swollen foot would lead on to the octopus who nibbles his foot for lack of food.’ (Gregory Nagy H24H Sourcebook Hesiodic Works and Days, Note 9)
[4] “They (symbols) do not only refer to the realm of the sea, but to the re-generative power of this mollusk.” (Nanno Marinatos Minoan Religion page 142)
[5] “The gold foil ornaments from the shaft graves at Mycenae, in the shape of shrines, naked goddesses, octopuses, butterflies, rosettes, etc. were probably stitched onto ritual costumes.” (Nanno Marinatos Minoan Religion page 141
[6] Nanno Marinatos Minoan Religion page 231