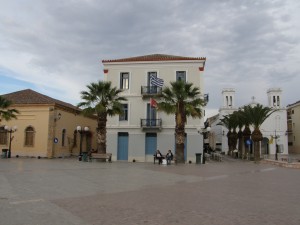 I had the opportunity to travel to Greece with Harvard Alumni Association’s travel-study program which was led by Gregory Nagy. I came back with great memories. The first leg of the travel-study program focused on Nafplio and its environs, namely Argos and Mycenae. Nafplio was the capital of the First Hellenic Republic and of the Kingdom of Greece, from the start of the Greek Revolution in 1821 until 1834. Nafplio is now the capital of the regional unit of Argolis.[1] The town also houses Harvard University’s Center for Hellenic Studies in Greece.

The group visited the temple of  Hērā in Argos. This is the temple where Kleobis and Biton carry their mother, the priestess of Hera. Herodotus in his Histories Book 1-31.2–1.31.5 relays the story.

Kleobis and Biton. 1.31.2 They were Argive by birth [genos], and they made a living that was quite sufficient. And, on top of this, they had such great physical strength! Both were prize-winning athletes [āthlophoroi]. Here is the story that is told about them. There was a festival [heortē] of Hērā in Argos, and “it was absolutely necessary for their mother [= the priestess of Hērā] to be conveyed to the sacred precinct [hieron] [of Hērā] by a team of oxen. But their oxen had not come back from the fields in time [hōrā], so the youths themselves took the yoke upon their shoulders under constraint of time [hōrā] and started pulling the wagon, with their mother riding on top of it, transporting her [their mother] forty-five stadium-lengths until they arrived at the sacred precinct [hieron] [of Hērā ]. 1.31.3 After they [= Kleobis and Biton] had done these things and had been seen [op] doing these things by everyone participating in the festival [panēguris], the very best fulfillment [teleutē] of life now happened for them. And in all this the god showed that it is better for a man to be in a state of death than in a state of life [zōein]. For the men of Argos, standing around the two youths, declared them blessed [makares] for having such physical strength, while the women of Argos declared the mother of the youths blessed for having such children as these two. 1.31.4 And the mother, overjoyed [perikharēs] about what had been accomplished and “goddess [= Hērā] should give them [= the two youths] the very best thing that can happen to a mortal. 1.31.5 After this prayer, the people sacrificed [thuein] and feasted [eu-ōkheîn], and the youths went to sleep [kata-koimâsthai] right then and there in the sacred precinct [of Hērā]. And they [= the two youths] never got up [an-histasthai] again, but were held still [ekhesthai] in this fulfillment [telos]. And the people of Argos made likenesses [eikōn plural] of them and dedicated these at Delphi, saying that these were images of men who had become the very best of men.

The Acropolis of Mycenae and Treasures of Atreus were the other focal points of the first leg.

Janet M. Ozsolak is a member of Hour 25 Editorial Team. She previously served as a TA in HeroesX in iterations 2-5.