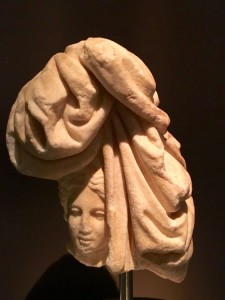 The pictures in this Gallery were  taken in Athens, at the Museum of Cycladic Art. The Museum specializes in the Cultures of the Aegean and Cyprus. For a better understanding, the different periods are listed underneath. You may find the information at the Museum internet site.

The term Cycladic comes from the name of the Cycladic Islands, a group of islands in the Aegean sea. Pottery was widely used to store and to transport food, drinks, oil, perfume. Cyprus, an island in the eastern part of the Mediterranean,  was a place where Mycenaean people took refuge in the Late Bronze Age, and they brought with them their skills. We may not have many writings from the Bronze Age, but we have pottery and statues. 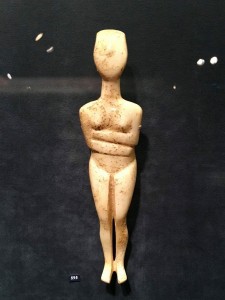 Cycladic art attained maturity during the Early Cycladic II period, with the creation of the distinctive figurine type that was to hold sway for the next five hundred years. This type has been called “canonical” because it displays constant morphological canons and artistic conventions, such as the folded arms above the abdomen (with left over right), slightly flexed knees, backward tilt of the head and slanting feet.

Researchers have distinguished five different varieties of the canonical type. The “Kapsala variety”, named after the Early Cycladic cemetery on Amorgos where it was first identified, is the earliest and is dated to the early phase of the Early Cycladic II period. Figurines of this variety are small (h. 13–37 cm.) and distinguished by plasticity in the treatment of the body, ovoid head, curvaceous profiles and almost complete absence of incised details. Nonetheless, the presence of certain traits reminiscent of figures of the later “Spedos variety” (lyre-shaped head, acutely slanting feet) places this particular example in a transitional phase between the two varieties.

Description from the Museum

At the Museum, you also have statues from later periods. 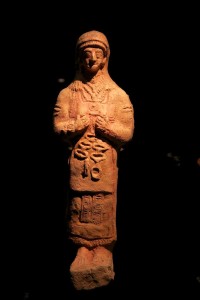 Figurine of a standing female in characteristic pose with the hands supporting the breasts. She wears lavish garments and copious jewellery. The figurine has been modelled in a double mould and is hollow. Details are picked out in red and black paint, easy to flake-off. Figurines of females holding their breasts are known from various sites on Cyprus (Amathous, Idalion, Tamassos etc.). This particular type is especially common at Achna, in the Larnaca region, where there is an Archaic sanctuary of the Great Goddess. Most researchers interpret the figurines as representing priestesses. Others, however, believe that they refer to the cult statue of the deity or that they are images of worshippers who deposited them in sanctuaries as a token of eternal faith.

Description from the Museum