….The deep-sea-going ship
Made landfall on the island … Ithaca at last.
There on the coast a haven lies, named for Phorcys,
The old god of the deep – with two jutting headlands,
Sheared off at the seaward side but shelving towards the bay. 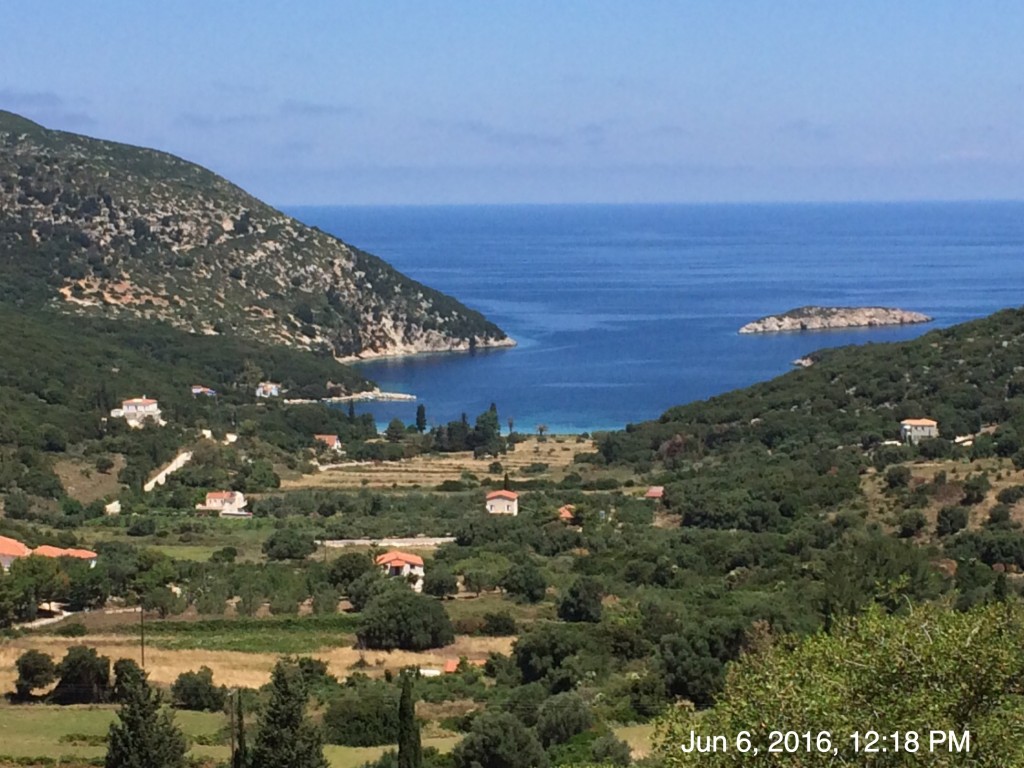 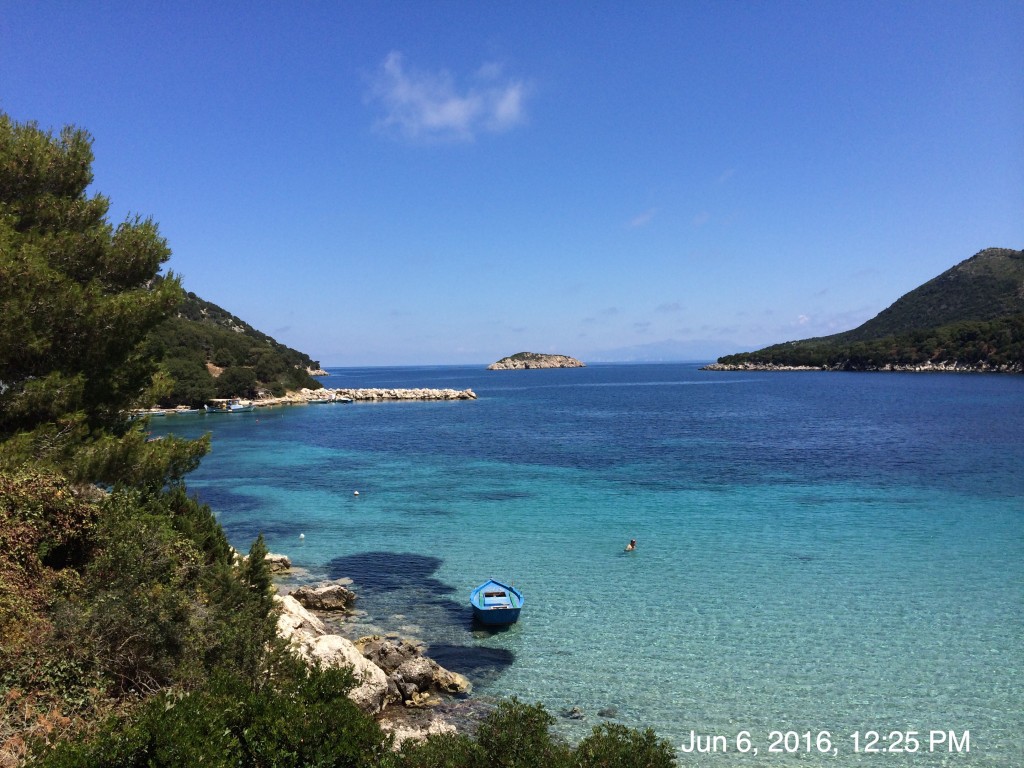 This is Atheras Bay, up in the northwestern corner of Kefalonia, and it just might be the perfect spot to train for the Classical Greece for Students and Alumni tour, led by Gregory Nagy in June 2016. This beach is probably the strongest candidate yet to be the place where Odysseus landed on Homeric Ithaca for his return from the wars.

I stopped here on the way to joining the study tour. I first learned of this place in 2012 when I came across the book Odysseus Unbound (2005) by Robert Bittlestone, an amateur classicist. Bittlestone took on the ancient question of where Homer’s Ithaca might have been located[1]. How exact were the geographical descriptions in the Odyssey? The geography and archaeology of modern Ithaca, for example, do not match up well with the descriptions in the epic. The same is true of the surrounding islands and mainland locations.

I am Odysseus, son of Laertes, known to the world
For every kind of craft—my fame has reached the skies.
Sunny Ithaca is my home. Atop her stands our seamark,
Mount Neriton’s leafy ridges shimmering in the wind.
Around her a ring of islands circle side-by-side,
Doulichon, Same, wooded Zacynthos too, but mine
Lies low and away, the farthest out to sea,
Rearing into the western dusk
While the others face the east and breaking day.

Bittlestone saw that none of the candidates to be Homeric Ithaca lay far enough west or low enough on the horizon and turned his attention to Kefalonia. He began with slow readings of all the geographical references to Ithaca in the Odyssey and reviewed the efforts ancient and modern to locate Ithaca, drawing on the help of James Diggle, professor of Greek and Latin at Cambridge. The alignment of the text and action of the epic with the geography of the Paliki peninsula on the west of the island (see Google Earth image below) proved to be a very close match. But for the Paliki peninsula actually to be Homeric Ithaca—the central insight—the isthmus today connecting Paliki to the main island would somehow have had to have been under water in epic times, an open channel. The discovery that the ancient geographer Strabo in the first century of the common era had written that the narrowest part of the isthmus was so low that it was often completely under water encouraged this line of investigation.[3] For the geological portion of the investigation, Bittlestone drew on the expertise of John Underhill, a professor of Stratigraphy at the University of Edinburgh. Both professors contributed technical appendices to the book. 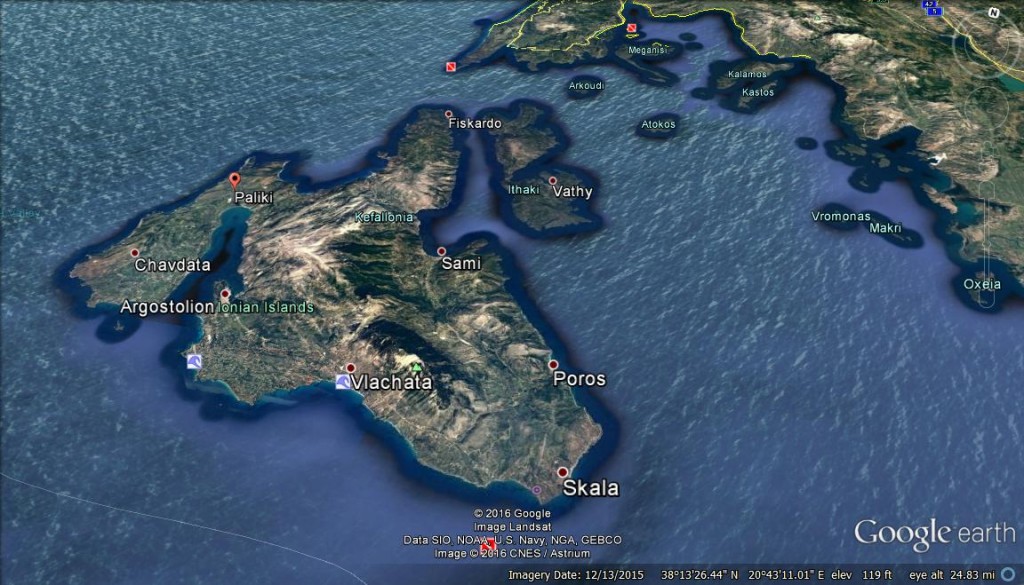 The geological argument turns on whether Kefalonia, located very close to the major fault line where the African and Eurasian tectonic plates collide, could have been raised upward enough to lower the sea level and close the channel over centuries of tectonic activity and associated rock-slides. The study suggests it could. In 1953, for example, a magnitude 7.2 earthquake raised the entire island by about 60 cm, a catastrophe that destroyed about 80% of the buildings on the island. The island continues to be active. During my visit, for example, I experienced three tremors in five days. The geological evidence seems to have held up so far in scholarly and professional circles. The argument had also drawn attention in the press[4].

When the opportunity to join the Classic Greece study tour presented itself, I scheduled a few days on Paliki before meeting the group to leave time to visit these sites and reread parts of Bittlestone and the Odyssey[5]. Kefalonia is too far from the main sites near Athens and on the Peloponnese to include in a brief tour, but it is a fit with the spirit Gregory Nagy envisioned for such travel:

To make contact with the sacred, you had to make a sacred journey with the objective of seeing things as they really are. For Greek intellectuals in the ancient world, the conventional word for this kind of journey, aimed at seeing for real, was theōriā. In modern religious terms, a theōriā is a sort of ‘pilgrimage’. In ancient rational terms, theōriā is inductive thinking that aims to achieve a true vision by seeing sacred places. Such special seeing—that is, theōriā —is conceptually linked to reading the classics, and in this concept we see the basis for the evolution of the ancient word theōriā into the modern word “theory.”

… It is a journey of a special kind of reflective seeing, grounded in the reading of the classics. We are not unthinking tourists who merely “consume” the pleasures of classical sites but reflective ‘pilgrims’ in the ancient sense of theōriā[6].

Unlike modern Ithaca, on this part of Kefalonia I saw virtually no signs of tourism linked to the Odyssey. Although the wonderful manager of the hotel where I stayed overlooking Petani Bay knew the Bittlestone research and sites well and had met the authors, Robert Bittlestone’s untimely death in 2015[7] seems to have foreclosed for now any related commercial development or site identification plans.

Beyond the initial questions of the island’s location and the description of the split headland at the landing site on Ithaca[8], Bittlestone developed the analysis further and in great detail:

Specific sites for Phorcys Bay [Atheras Bay], Asteris, Ithaca city, Odysseus’ palace, Hermes Hill, Ravens’ Rock, Laertes’ farm, and other Ithaca locations have been identified and visited and the results of this preliminary on-site exploration are very positive. This is particularly evident in the case of those well-known Homeric passages that have previously appeared topographically inconsistent. In every case this new location supports the view that Homer’s geographical descriptions of ancient Ithaca in the Odyssey were exact.[9]

True to the descriptions in the epic and the implicit timelines (for example, Eumaios’ routinely walking back and forth in an afternoon between the pig farm and the city and palace at Ithaca, or Odysseus’ walking up to the farm from Atheras in the time available in the epic), those sites are all close together and can be reached quickly. By car it is about 15–20 minutes from the palace site all the way to Atheras Bay on the northwest coast. There are no signs or directions identifying the sites, and many are visible only from the road and some not at all, since access is limited on private property. There are few casual visitors to these places.

Although it is impossible to do justice here to the scope of Bittlestone’s research and his presentation of such a vast amount of interdisciplinary material for so many sites, the handful of photographs that follow will give some idea of the principal locations and the countryside. Here is a Google Earth image of a critical part of Paliki for locating Odysseus’ Ithaca. Atheras beach is at top center of the image, with the characteristic twin headlands; Kastelli, described below, is in the center directly below it, about half way between the Paliki map label and the bay; Petani Bay is at lower left: 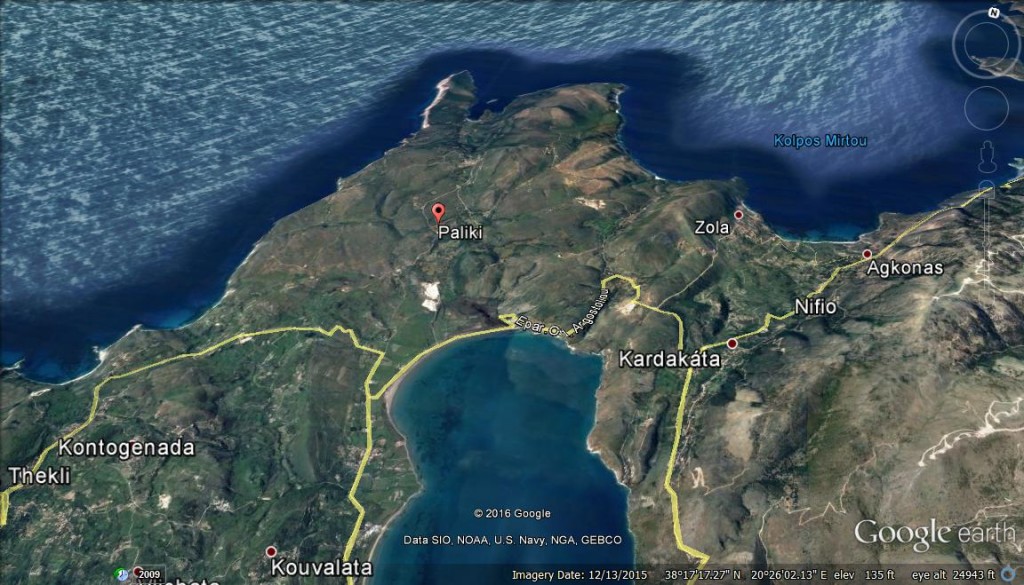 The two pictures below show the bay looking south and east from Kastelli, the low mountain (left foreground) that Bittlestone identified as the site of Odysseus’ palace and, further down the slope below it, the city of Ithaca, both facing the water. The harbor at Ithaca was below them. The likely location for the unsuccessful naval ambush near Argostoli that the suitors had prepared for Telemachus on his return from Pylos is visible in the distance in the bay in the center-right of the first photo. 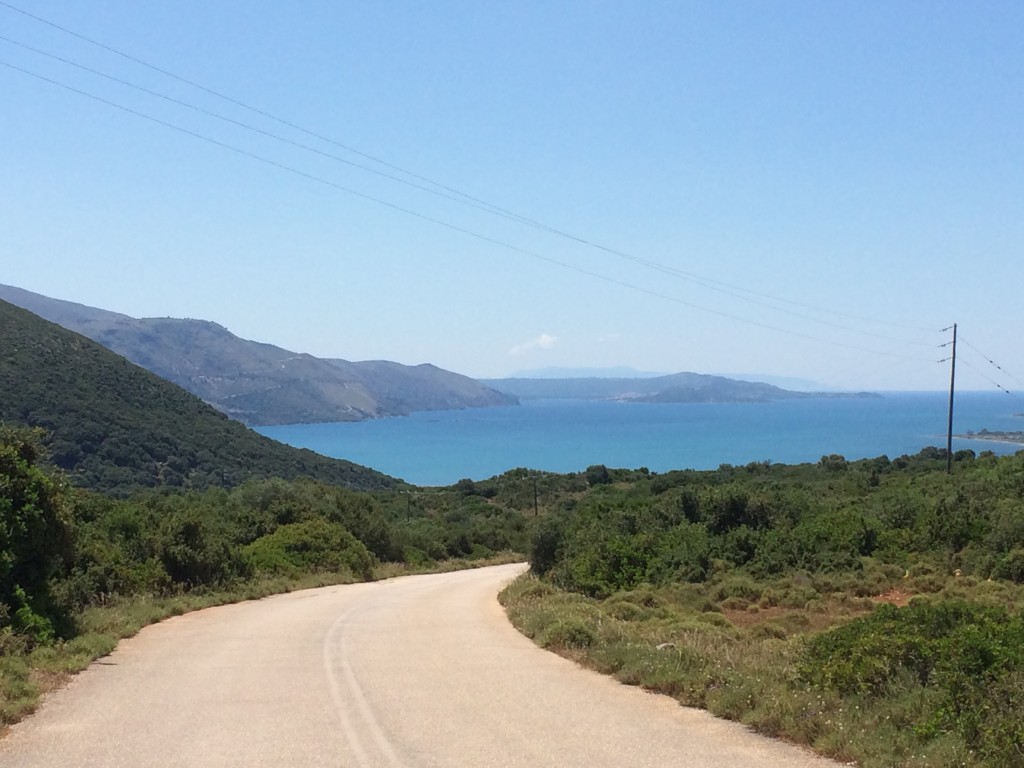 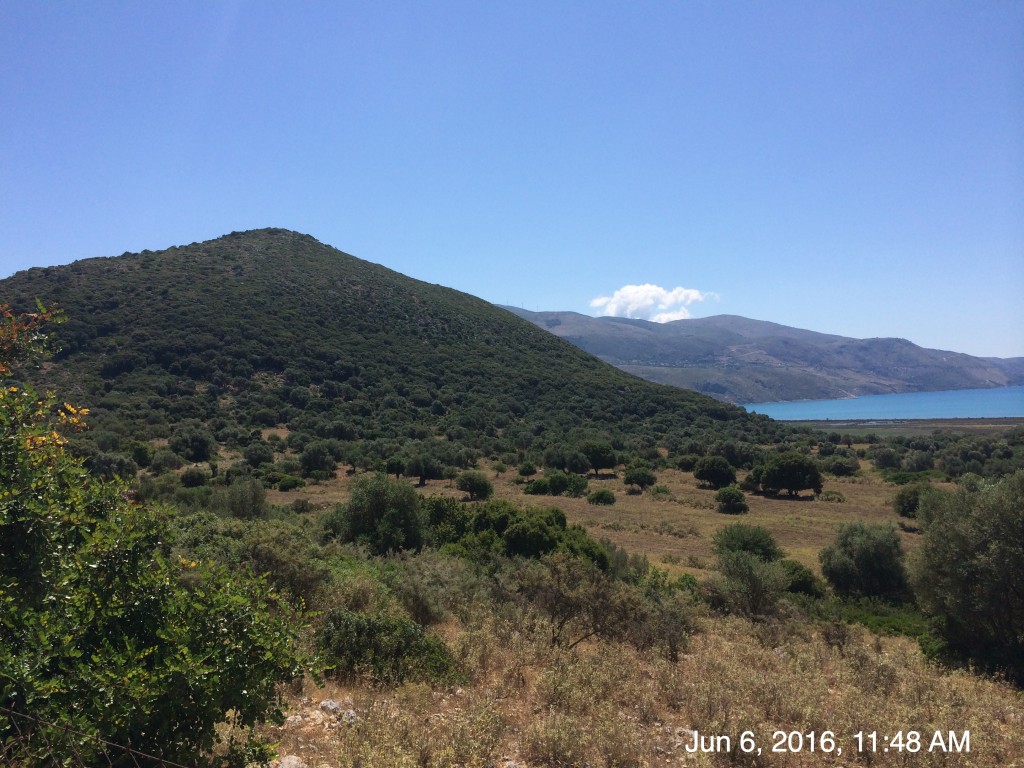 The ridge-line in the picture below leads north (left in this picture) from the palace/city at Kastelli back to the pig farm and springs past some of the other landmarks from the Odyssey, including Ravens’ Rock and Hermes Hill, on to Mount Neriton and eventually to Atheras and the bay, all showing features that square with previously unresolved questions about the text. Kastelli is at the right in this photo below, facing south and east. 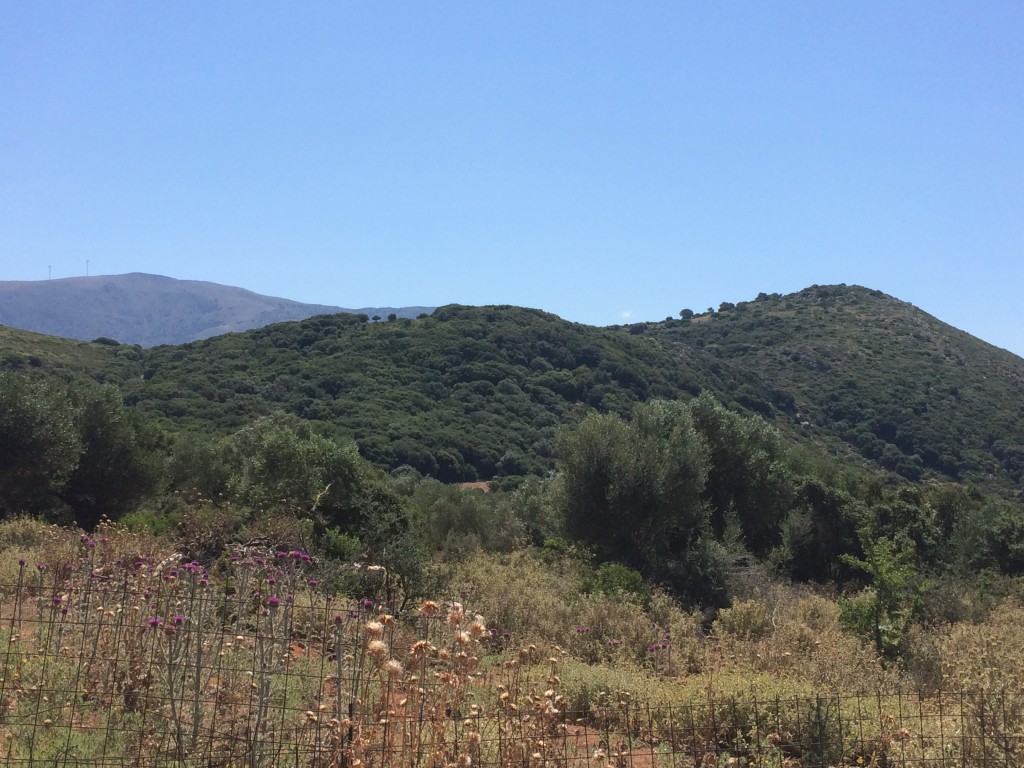 Here is another view of Atheras beach, north of the ridge-lines above, showing the dual headlands at the mouth of the harbor. 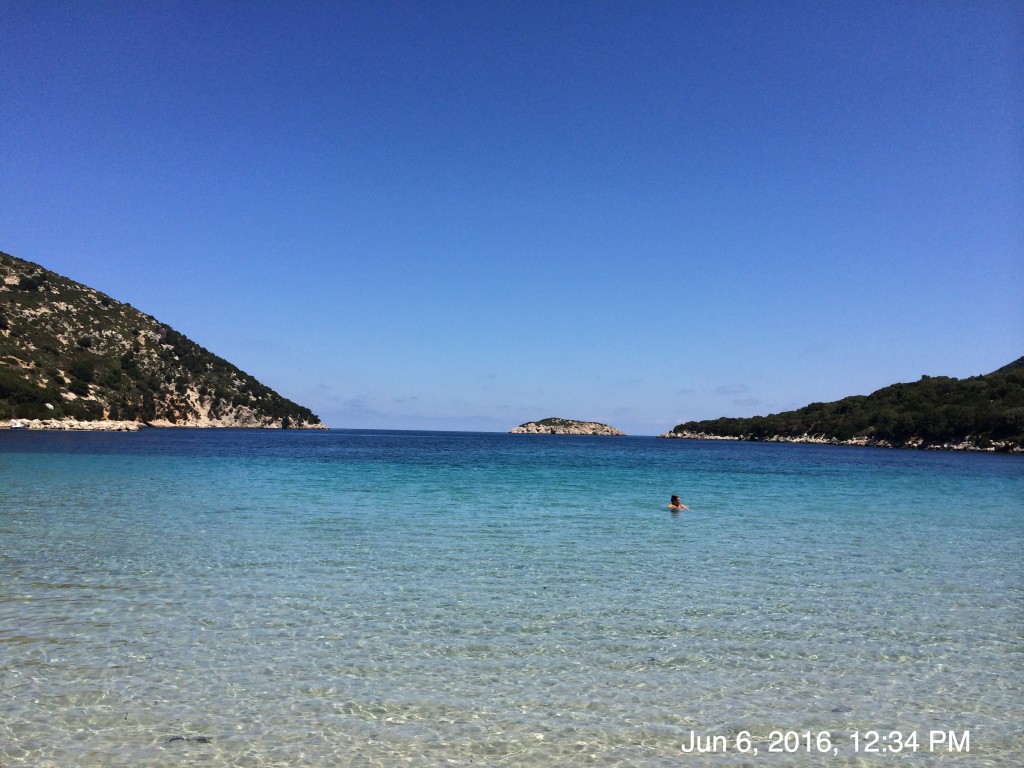 The experience of being at these sites, “seeing things as they really are,” was powerful—and for some reason Atheras beach exceptionally so. I came away from it convinced that, whatever the historical reality of the epic, the performers and audience of the Odyssey really knew this island well.

Finally, here are two pictures of Petani Bay, above the beach looking out to Ortholithos Point. Bittlestone identified this spot as the first headland that Telemachus passed on his escape from the suitors as he headed north toward Atheras, sailing wide around the western coast of the island.[10] According to Bittlestone, Telemachus likely disembarked further up the coast at the beach at Agni Cove to return to Ithaca city by a more remote, safer short cut as his crew continued north around the island to return to the port. 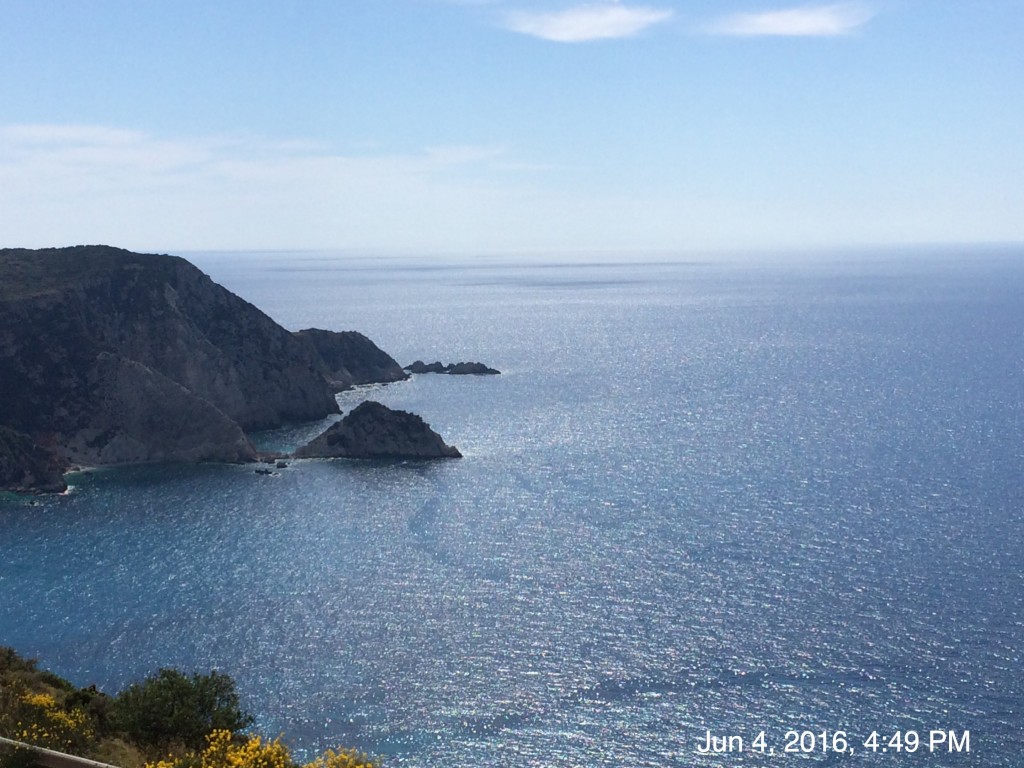 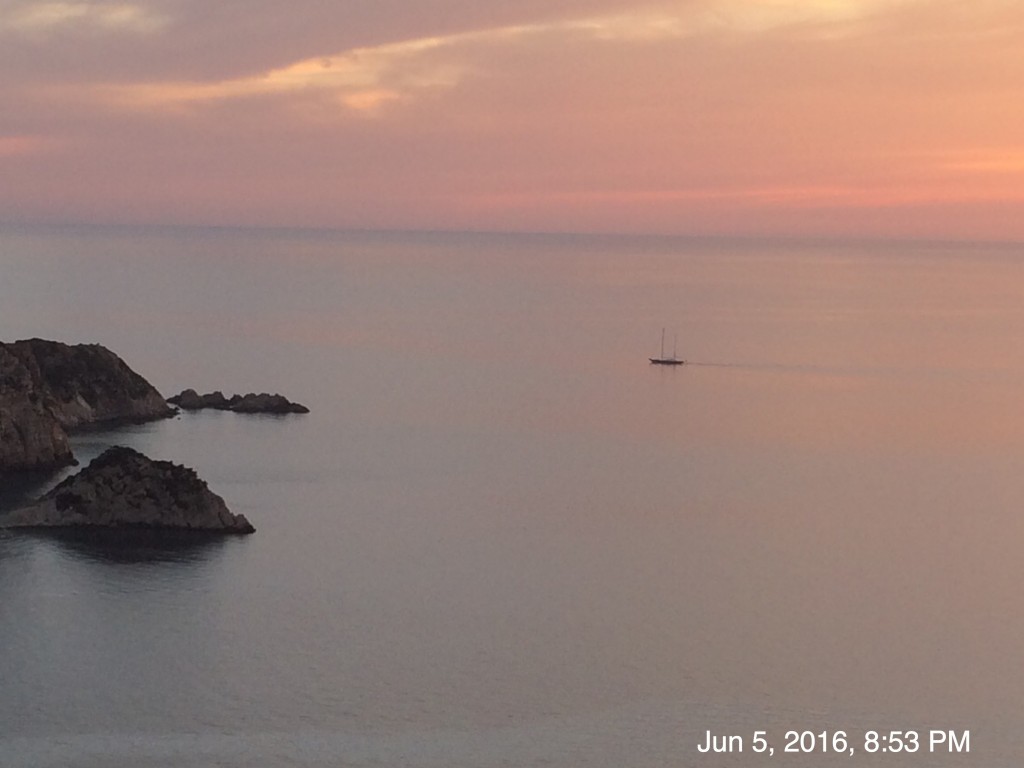 [1] Bittlestone, Robert. 2005. Odysseus Unbound: The Search for Homer’s Ithaca, Cambridge University Press, Cambridge, UK. Written with James Diggle and John Underhill.
[2] This quotation and the other from the Odyssey about Atheras Bay, in Bittlestone, pages 40–42.
[3] Bittlestone, page 50.
[4] Nicholas Kristoff, “Odysseus Lies Here,” The New York Times, March 10 2012, posted at: http://www.nytimes.com/2012/03/11/opinion/sunday/kristof-odysseus-lies-here.html?_r=0
[5] I discovered in the process that Gregory Nagy knew the author and his work and had even written one of the dust jacket reviews of Odysseus Unbound: “This book is a gem. Its reconstruction of prehistoric Ithaca has a convincingly Homeric “look and feel” to it. Reading the Odyssey is unlikely ever to be the same again.”
[6] Letter dated 26 May 2016, from Gregory Nagy to the Classic Greece study tour participants.
[7] Obituary, published in the forum.
[8] Bittlestone, pages 40–43. The author based these two initial questions in his short list of key geographical tests on the two quotations from the Odyssey noted above. He did the same for every geographic reference to Ithaca in the epic.
[9] Bittlestone, page xvi.
[10] Bittlestone,p. 165.

David Long lives in Reston, Virginia, near Washington, DC. He has more than 25 years of commercial and policy experience in international trade, currently in global supply chain issues. David first joined HeroesX in 2013 and traveled on the travel-study tour to Greece led by Gregory Nagy in June 2016.