We were pleased to welcome back Gregory Nagy of Harvard University for an Online Open House discussion about Sappho Song 44 and about his postings on Classical Inquiries. 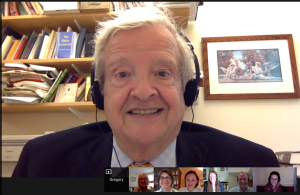 The process of remembering in ancient Greek song culture requires a special medium, song. When I say song here, I include poetry, even though the word poetry in modern usage is understood to be different from song. In the ancient Greek song culture, however, both poetry and song are understood to be a medium of singing. And such singing is an oral tradition. The epic poetry of the Homeric Iliad and Odyssey derives from such an oral tradition of singing, which is a process of composition-in-performance. That is, composition is an aspect of performance and vice versa. In this kind of oral tradition, there is no script, since the technology of writing is not required for composition-in-performance. In Homeric poetry, the basic medium of remembering is heroic song or kleos. (Gregory Nagy, The Ancient Greek Hero in 24 Hours, 2§12)

Song 44 of Sappho, which has a form conventionally described as lyric, is not only related to the form of epic as exemplified by the Homeric Iliad and Odyssey: more than that, this form of lyric, like the form of epic, originates from an oral tradition. (Gregory Nagy, “Song 44 of Sappho revisited: what is ‘oral’ about the text of this song?,” Classical Inquiries, 2016-09-01)

Mentioned in this discussion:

Nagy, Gregory. 1979. The Best of the Achaeans, available online at the Center, second edition 1999.