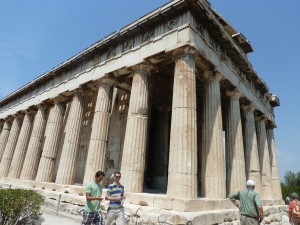 The Agora in Athens is one of the sites I visited as a part of the study-travel group in June 2016. The group was led by Gregory Nagy. Walking on the Panathenaic Way, seeing the Temple of Hephaistos, the water clock, the prison on the Marble-Workers Street and visiting the museum were some of the highlights for me. Agorā is part of our Core Vocabulary and Sarah Scott started a discussion on this thread. The word is glossed as ‘public assembly’ or ‘place of public assembly’. If you are a student of the ancient Greek language, agorā is probably one of the early vocabulary words you encounter and it is generally translated as ‘marketplace’. Translating agorā simply as marketplace does not capture the importance of this physical space. John McKessen Camp II has worked in the Athenian Agora since 1966, and has been the Director of Excavations there since 1994. He provides an inclusive explanation in The Athenian Agora.

A large open square, surrounded on all four sides by buildings, the Agora was in all respects the center of town. The excavated buildings, monuments, and small objects illustrate the important role it played in all aspects of civic life. The council chamber (Bouleuterion), public office buildings (Royal Stoa, South Stoa I) and archives (Metroon) have all been explored. The lawcourts are represented by the discovery of bronze ballots and a water-clock used to time speeches. The use of the area as a marketplace is indicated by the numerous shops where potters, cobblers, bronzeworkers, and sculptors made and sold their wares. Long stoas (colonnades) provided shaded walkways for those wishing to meet friends to discuss business, politics, or philosophy, while statues and commemorative monuments reminded citizens of former triumphs. A library and concert hall (odeion) met cultural needs, and numerous small shrines and temples received regular worship. Here administrative, political, judicial, commercial, social, cultural, and religious activities all found a place together in the heart of ancient Athens.
(Page 4)

The prison at the outskirts of the Agora saddened me as the final place of Socrates. Upon my return from Greece, I wanted to read more about the Athenian Agora and Socrates who spent a good portion of his life in the Agora. Ironically his life ended there, in the prison in the Agora in 399 BCE.

In her book The Hemlock Cup Bettany Hughes talks about how the Agora and Socrates interact. Chapter 3 of her book opens with this quote from Xenophon:

But Socrates, moreover, was always out in public. In the morning he went to the colonnades and the gymnasia, during the market he was seen there at the Agora, and for the rest of the day he was constantly in whatever place he thought he would meet up with the most people. And he talked quite a lot, and those who wished, could hear him.

Hughes continues that Athenian young men, until a certain age, were not allowed in the Agora. In Chapter 3, page 22 she says,

Xenophon tells us that Socrates frequently stopped by here in the artisans’ district at the Agora’s limit because this was where youths and young men were allowed to meet to hear the philosopher’s words — only over-eighteens had access actually within the boundary of the 37-acre Agora itself.

Hughes makes a reference to 4.2.1 of Xenophon’s Memorabilia. Here is the text from Perseus, translated by E.C. Marchant:

I will now show his method of dealing with those who thought they had received the best education, and prided themselves on wisdom. He was informed that Euthydemus, the handsome, had formed a large collection of the works of celebrated poets and professors, and therefore supposed himself to be a prodigy of wisdom for his age, and was confident of surpassing all competitors in power of speech and action. At present, Socrates observed, he did not enter the Market-place owing to his youth, but when he wanted to get anything done, he would be found sitting in a saddler’s shop near the Market. So, to make an opening, Socrates went to this shop with some of his companions.

The Agora is the place of rituals and public gatherings. Sophocles, in Oedipus Tyrannus, gives a glimpse of the Athenian Agora.

18| The priest of Zeus, that is who I am, while these others are from the ranks of young men, |19 specially selected. The rest of the people, wearing garlands, |20 are seated at the place of assembly [agorai], at the twin buildings of Athena, |21 temples, where Ismenos gives prophetic answers with his fiery ashes.

Janet M. Ozsolak is a member of Hour 25 Editorial Team and serves as a Community TA on HeroesX iterations 2–6.

Reference:
Hughes, Bettany. 2010. The Hemlock Cup: Socrates, Athens and the Search for the Good Life. London.