Strange place Malta. At times, you feel in Greece, at times in Muslim North Africa, or even the Levant.

These islands have been inhabited for millennia. In 5200 BCE they were organized in villages and by 3600 BCE, they already had megalith temples, that is 1000 years before the Egyptian pyramids were built. And 2000 years before the Mycenae Palace of Agamemnon.

It seems to me that its history has been put at the service of war. It has been coveted, influenced and dominated by the Phoenicians, Carthaginians, Greeks, Romans, Spanish, Normans, Knights of St John’s, French and British.

The Knights of St. John’s seem to be the only ones to have invested beyond strategic purposes, in spite of not wanting the islands (Malta, Gozo and Comino) when they were first offered to them by King Charles the V of Spain, who gave them to them on condition that they send him a Maltase Falcón every year. The first was sent to him together with a specially designed falcon statue covered in precious stones. It never reached its destination, shipwreck or pirates to blame.

Three sites stand out: the Hypogeum, the Ġgantija temple and the Blue lagoon.

The Hypogeum is simply an extraordinary place. An underground temple dedicated to the ancestors built on three connected (one on top of each other) subterranean levels. From the Oracle room in the middle level a male voice spoken through a hole reaches and reverberates clearly in all levels (the first broadcasting system ever, 3300 BCE).

Because it reproduces the design of an aboveground temple, architectural features such as lintel, porticos and columns are carved out of the rock; this conveys the feeling of walking through a massive, complex sculpture. They are multiple rooms of different sizes, many of them circular. The walls were decorated with beautiful abstract and non-abstract drawings in ochre colour, which they presumably imported from Sicily. The sleeping lady was found in one small circular room. 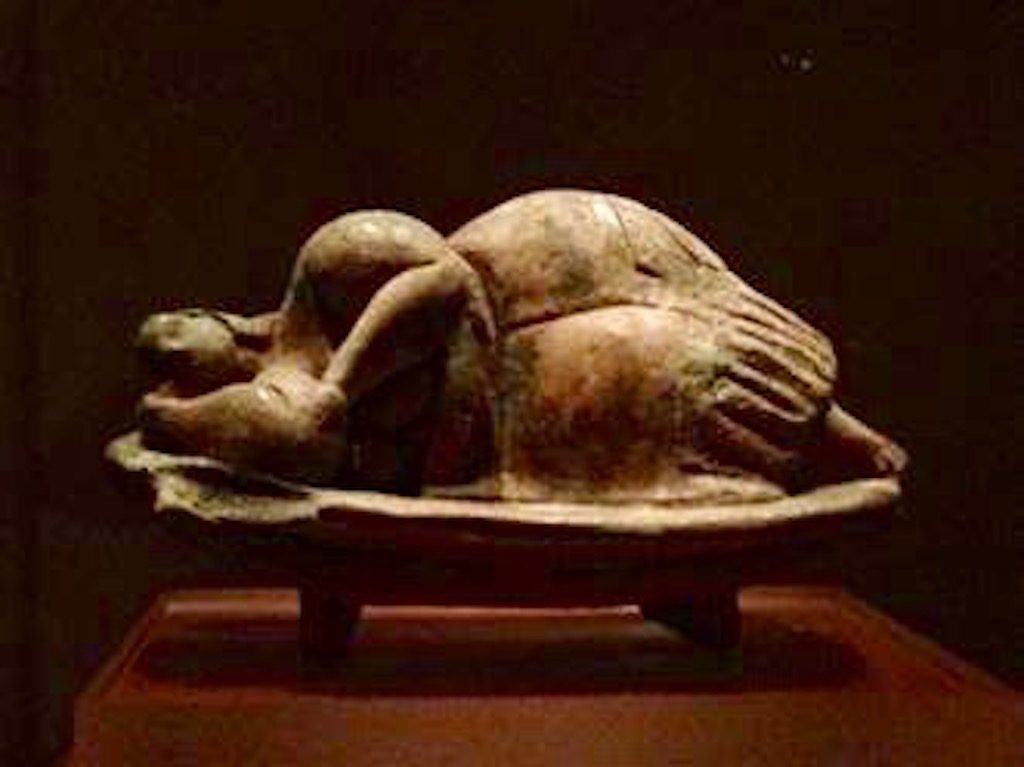 The name Ġgantija derives from the word ġgant, the Maltese word for giant as the site was commonly associated with a race of giants. (Similar to the Cyclops walls of Mycenae.) Notwithstanding its age, the temple survives in a considerably good state of preservation. Some of the megaliths exceed five meters in length and weigh over fifty tons. 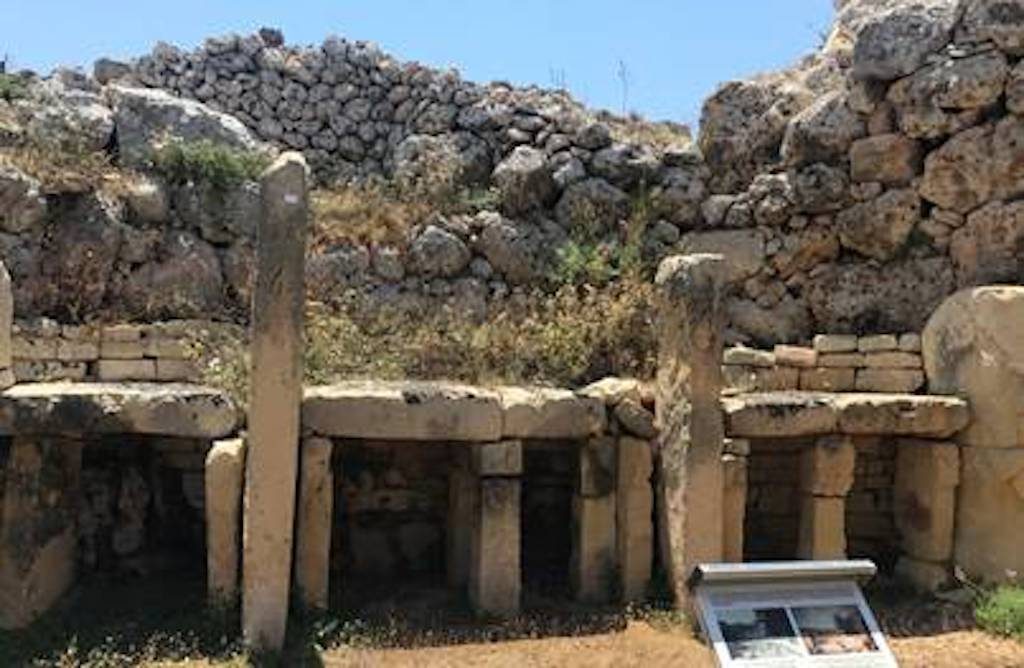 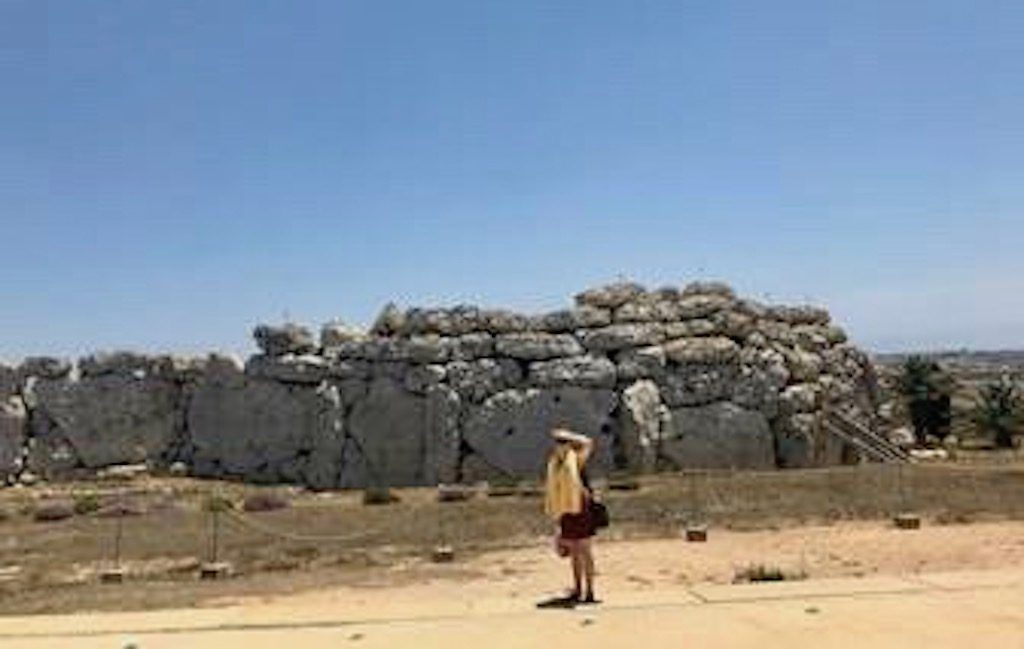 Ġgantija is the second-oldest standing structure in the world built in 3600 BCE (Gobekli Tepe in Turkey is the oldest found, so far). It is in the island of Gozo, In the same island where many centuries later, Homer tells us Odysseus was kept captive by (almost) irresistible Calypso.

…he left the sea and went on by land till he came to the cave where the nymph Kalypsō lived.He found her at home. There was a large fire burning on the hearth, and one could smell from far the fragrant reek of burning cedar and sandalwood. As for herself, she was busy at her loom, shooting her golden shuttle through the warp and singing beautifully. Round her cave there was a thick wood of alder, poplar, and sweet smelling cypress trees, wherein all kinds of great birds had built their nests— owls, hawks, and chattering sea-crows that have their business in the waters. A vine loaded with grapes was trained and grew luxuriantly about the mouth of the cave; there were also four running rills of water in channels cut pretty close together, and turned here and there so as to irrigate the beds of violets and luscious herbage over which they flowed. Even a god could not help being charmed with such a lovely spot, so Hermes stood still and looked at it; but when he had admired it sufficiently he went inside the cave.

The Blue lagoon is a blue-turquoise crystalline expanse of sea between Gozo and Comino, surrounded by mysterious caves, which also have a place in the song of the Odyssey. To swim there is divine. Join the Forum discussion here. 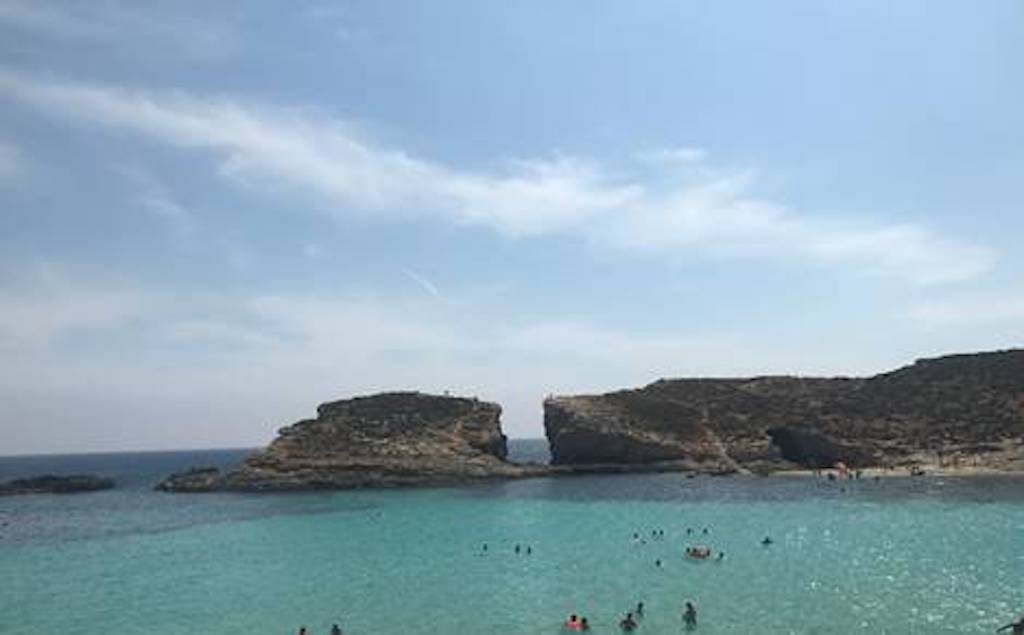 Cecilia Taiana Ph. D (Psychology) is an Associate Professor at the University of Carleton, in Ottawa, Canada, where she teaches a graduate course on Trauma and Memory. She is also a practicing psychoanalyst and the recipient of two national prizes granted by the Canadian Psychoanalytic Society, the Charles Levin Prize for her article “Mourning the Dead, Mourning the Disappeared” (2014), and the Miguel Prados Prize for “Memory of the Process: The Role of Day’s Residues in the Field of the Session” (2017).

During her last sabbatical leave, Cecilia was a visiting scholar at Stanford University and in her current sabbatical she is studying Homeric Poetry with the essential help of the Center for Hellenic Studies online community, and created a group dedicated to the study of Greek tragedies.