In Homeric poetry, apart from family members there are other members of the household [oikos] who are described by many different Greek words, and carry out differing roles. We were interested in understanding what those words would have meant and how servitude was portrayed, in the context of ancient Greek song culture of the Iliad and Odyssey. We start our exploration with female slaves/servants.

Some were captured in war, as foreseen by Hector when he says to Andromache:

[450] But the pain I have on my mind is not as great for the Trojans and for what will happen to them in the future, 451 or for Hecuba or for Priam the king, 452 or for my brothers if, many in number and noble as they are, 453 they will fall in the dust at the hands of men who are their enemies 454 —no, [the pain I have on my mind is not as great for them] as it is for you when I think of a moment when some Achaean man, one of those men who wear khitons of bronze, [455] takes hold of you as you weep and leads you away as his prize, depriving you of your days of freedom [eleutheros] [from slavery] 456 And you would be going to Argos, where you would be weaving [huphainein] at the loom of some other woman [and no longer at your own loom at home] 457 —and you would be carrying water for her, drawing from the spring called Messēís or the one called Hypereia. 458 Again and again you will be forced to do things against your will, and the bondage [anagkē] holding you down will be harsh. 459 And someone some day will look at you as you pour out your tears and will say: [460] “Hector is the man whose wife this woman used to be. He used to be the best in battle 461 —the best of all the Trojans, those horse-tamers, back in those days when they fought to defend Ilion [= Troy].” 462 That is what someone some day will say. And just hearing it will give you a new sorrow 463 as the widow of this kind of man, the kind that is able to prevent those days of slavery [doulion hēmar].
Iliad 6.450–463, adapted from Sourcebook] 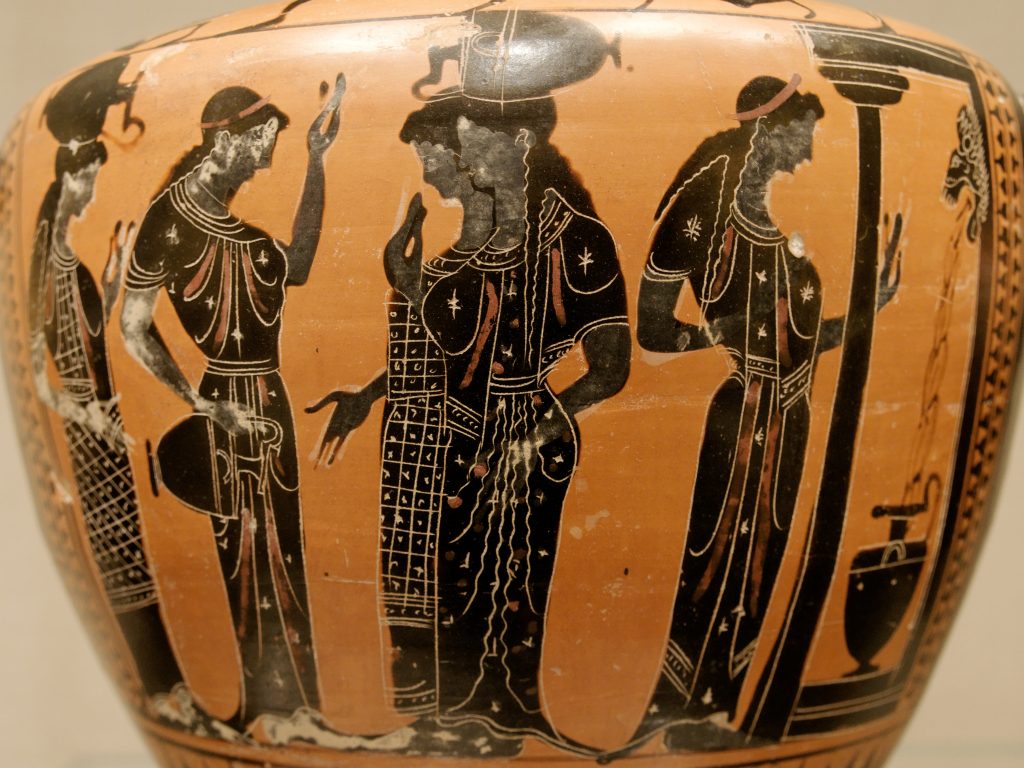 In such circumstances a woman captive could be used to carry out menial tasks, but could also be used at her master’s pleasure.

Achilles slept in an inner room, and beside him [665] the daughter of Phorbas lovely Diomede, whom he had carried off from Lesbos. Patroklos lay on the other side of the room, and with him fair-waisted Iphis whom radiant Achilles had given him when he took Skyros the city of Enyeus.
Iliad 9.663–668, Sourcebook

Moreover let him [=Agamemnon] swear an oath before the Argives that he has never gone up into the couch of Brisēis, nor has lain down with her, even though it is right [themis] for humans, both men and women, to do this
Iliad 19.175–177, Sourcebook

It seems to be significant if a male owner did not actually sleep with a servant or captive woman:

A good old woman, Eurykleia, daughter of Ops, the son of Peisenor, went before him with a couple of blazing torches. [430] Laertes had bought her with his own wealth when she was quite young; he gave the worth of twenty oxen for her, and showed as much respect to her in his household as he did to his own wedded wife, but he did not take her to his bed for he feared his wife’s resentment. She it was who now lighted Telemachus to his room, and she loved him [435] better than any of the other women [dmōai] in the house did, for she had nursed him when he was a baby.
Odyssey 1.428–435, adapted from Sourcebook

Eurykleia is an example of woman who was not captured in war but purchased, presumably born in servitude, although she seems to have an important role in the household. Women, whether captive or purchased, were valued for their skills and accomplishments.

Even when the masters did sleep with the women they could treat them well, and any children born to them. For example, Priam’s children by his concubines were brought up alongside those by his wife; and here Menelaos makes wedding arrangements for his son at the same time as his daughter by Helen:

For his only son he had found a bride from Sparta, daughter of Alektor. This son, Megapenthes, was born to him of a bondwoman [doulē], for the gods granted Helen no more children after she had borne Hermione, who was fair as golden Aphrodite herself.
Odyssey 4.10–14, adapted from Sourcebook

As for the household duties, apart from nursemaids like Eurykleia, we can see how the maids carry out various tasks in this idealized scenario for the Phaeacians:

There are fifty maid servants [dmōai gunaikes] in the house, some of whom are always grinding rich yellow grain at the mill, [105] while others work at the loom, or sit and spin, and their shuttles go, backwards and forwards like the fluttering of aspen leaves, while the linen is so closely woven that it will turn oil.
Odyssey 7.103–107, adapted from Sourcebook Grinding grain would have been hard physical work: in Ithaka we see one such woman praying to Zeus because she is worn out with grinding grain for the suitors:

There were twelve miller-women [gunaikes] whose business it was to grind wheat and barley which are the staff of life. The others had ground their task and had gone to take their rest, [110] but this one had not yet finished, for she was not so strong as they were…[she prays] “…let this be the very last day that the suitors dine in the house of Odysseus. They have worn me out [= they have loosened my limbs] with the labor [kamatos] of grinding meal for them…”
Odyssey 20.107–110, 114–119, adapted from Sourcebook

But weaving and spinning are activities also carried out by the mistresses of the household, like Arete, Helen, Andromache, or Penelope, so perhaps the indoor servants are more skilled and of a higher status. To take another example the washing is carried out by both Nausicaa and her servant girls, and they then play ball together on the beach. In the preceding passages these girls are described both as amphipoloi ‘female servants’ or amphipoloi gunaikes ‘serving women’ and as dmōai (slaves, captives):

They [=the mules] pulled without flagging, and carried not only Nausicaa and her wash of clothes, but the maids [amphipoloi] also who were with her. When they reached the water side they went to the washing-cisterns… They took the clothes out of the wagon, put them in the water, and vied with one another in treading them in the pits to get the dirt out. After they had washed them and got them quite clean, they laid them out by the sea side, where [95] the waves had raised a high beach of shingle,
Odyssey 6.83–86, 90–94, Sourcebook

The ladies of the household are always accompanied by female servants. For example, when Nausicaa is asleep “Two maid servants [amphipoloi] were sleeping near her, both very pretty, one on either side of the doorway, which was closed with well-made folding doors.” (Odyssey 6.18–19), and when Penelope appears before the suitors “she came down the lofty staircase of her palace. She came not alone, but attended by two of her handmaidens [amphipoloi]” (Odyssey 1.330–331).

Then there is the housekeeper, tamia, who looked after people or served them.

A maid servant [amphipolos] then brought him water in a beautiful golden ewer and poured it into a silver basin for him to wash his hands, and she drew a clean table beside him; an upper servant [tamia] brought him bread and offered him many good things of what there was in the house,
Odyssey 7.172–175, adapted from Sourcebook

What evidence can you find about the roles and tasks of females who are captives, slaves or servants, or non-family members of the household? How were they treated? How do their masters or mistresses speak to them or about them? Please share passages in the forum and join the discussion!

Here are a number of terms for female slaves or servants, taken both from the passages we quoted above, and based on other searches using online corpora. The glosses are summarized from definitions in LSJ and/or Autenrieth, on Perseus, or from Montanari, Franco The Brill Dictionary of Ancient Greek. Notes are our own.

amphipolos ‘female attendant, handmaid’ This seems to be the most common term for all kinds of women servants.

dmōē / dmōs ‘slave taken in war, generally, slave’, although we found this word used of other female servants, such as those serving the Phaeacians and the nymphs attending Kalypsō

gunaikos ‘woman’, is sometimes used to refer to females carrying out household work, with or without one of the other terms for servant, although it is also used of other women.