Both the Iliad and the Odyssey play a key role in our understanding of the ancient Greek ship, in her physical and her metonymic appearance. In this section we will consider the epithet korōnis [κορωνίς] that describes the form of the ancient Greek ship. The word in Greek that we translate as ‘form’ is ideā [ἰδέα]. There is also the word eidos [εἶδος]. In Plato there is no real difference between the two words.[1]

For this reason, we can view ships that are described by their form as idealized ships. The word korōnis is usually translated as beaked,[2] curved, crowned, or garlanded.[3]

The idealized ship that we look at was propelled by single-manned oars. The rowers sat on a single level; one rank on the portside[4], a second rank on the starboard [amphielissa, “rowed on both sides”], giving the ship the ability to turn “on the spot”, quite like the turning of a chariot.[5]

The number of oarsmen grew from about twenty, to thirty, and finally fifty. By then the ship had reached her optimum length, for reasons of longitudinal strength and limitations imposed by the used materials.

The three-dimensional form of a ship is determined by the rounded curve under the stern, by the water lines, and by the frame sections. For many generations of ship builders, the curves of these three aspects continued to develop, each son of a shipbuilder trying to implement small improvements to the design of his father. Each polis—think of Corinth, Corcyra, Aegina and Athens—followed its own track towards creating the curves of the ideal ship.[6]

The curved form of the ancient Greek ship returns in the contour of the late Helladic ship as presented in Figure 1. The curves of the ship describe the silhouette of the forebody (left) which projects far forward into the shape of a snout-shaped cutwater [steira]. The curvature continuous towards the aft, without interruption, into the keel line and into the rounded shape of the stern of the ship.

The stem post is vertical and the bow is fitted with a closed railing. The horizontal line seems to depict an open railing mounted to vertical struts. The stern quarter (right) carries a steering-oar [pēdalion] and a ladder. The decorated stern post [aphlaston] curves forward, giving the boat her scorpion-like contour.

Figure 1: Late Helladic ship form, depicted on a kylix of around 530 BCE

To build some understanding of the flourishing termination and crowning elements at the extremities of the ship, a comparison is made with the model of a war and trading canoe, fitted with outriggers on the port and starboard side, dated mid-20th century, as shown in Figure 2. The model is made of wood, pigment and cane and originates from the Waropen coast, Teluk Cendrawasih, north coast of Papua, Indonesia. The model provides a lively and detailed impression of the curvature, crowning and garlanding of the forward extremity of an indigenous ship. 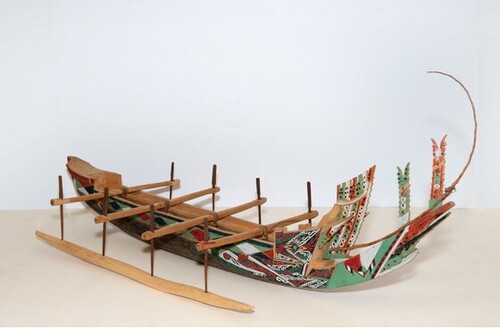 One more example of a ship with curved silhouette is the slender ship that is represented on a fragment of the François kratēr [8]. The stern post [aphlaston][9] is decorated with two swans’ heads[10], facing inward from the stern:

Figure 3: Detail of the François kratēr: the ship of Theseus (fragment from vase)

The ship has a keel that is bent longitudinally, so it can be dragged onto a beach. The stern quarter carries two steering-oars.

The next image, Figure 4, shows what remained of the decorated aphlaston, in the form of a red-colored ornament on the stern of a modern Greek caïque[11]:

Figure 4: Red-colored ornament on the stern post of a modern Greek caïque

As said, the curved form of the ancient Greek ship is reflected in the text of Homeric poetry. It provides us with the following occurrences of the “curved ships”, always in a form of the dative plural[12] —for example nēusi korōnisin [νηυσὶ κορωνίσιν] [13]:

The beautifully curved extremities of ships, crowned with flourishing terminations, form a perfect juxtaposition with the poetic moods of mixed feelings, hope, pride, honor, thus not only describing the ship, but also connecting to the epic context. The adjective korōnis, in Homeric poetry, is mostly used for ships, but the related noun, κορώνῃ [korōnē] can also be used to indicate a sea-bird, a door handle, or the tip of a bow onto which the bowstring is fitted:

The adjective korōnis may also be used to indicate the horns of a cow, providing us with the not uncommon poetic connection between sea and land.[14]  Lastly, korōnis can point at the flourish with the pen at the end of a line, or, metaphorically, the end of something, as well as a wreath or garland.[15]

This, and the tenor of the citations, supports the secondary meaning of korōnis as crowning or garlanding: crowning, not in the exclusive sense of a crowning element, but with the idea of a termination, as a head or horn. After Homer, the usage of the word includes the tip of a plow-pole, any tip, a crown, or a culmination of a festival.[16]

Some detailed examples of “crowning” ornaments, best described as talismanic, on stem and stern, in this case representing birds, flowers and butterflies, are shown in the Frieze, known as the “Thera Flotilla Fresco”,[17] Late Bronze Age, Late Minoan I Period, pictured below:[18] 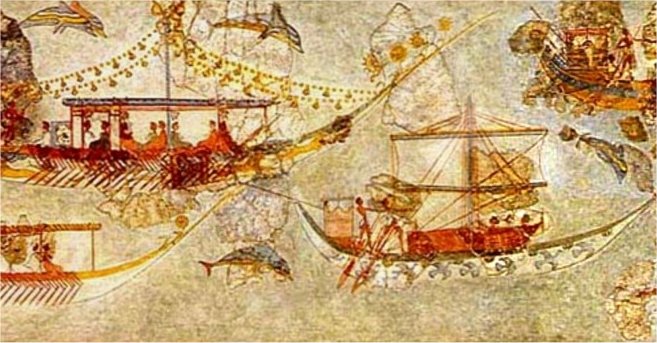 Figure 5: Detail of frieze, known as the “Thera Flotilla Fresco”

That the use of bird ornaments crowning the stern post of a ship, is not limited to antiquity or to the Levant, is shown in the image below. The photograph shows a peacock holding a twig in its beak on the stern device of a traditional, but modern yacht: 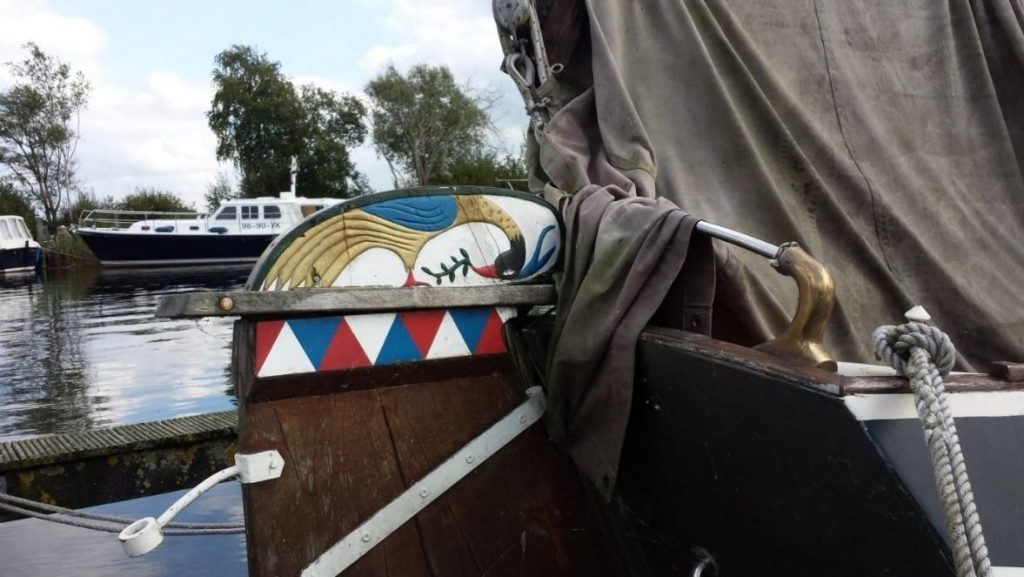 Figure 6: Bird ornament on the stern of a traditional, but modern yacht

[2] John Morrison (2000. The Athenian Trireme: The History and Reconstruction of an Ancient Greek Warship. Cambridge University Press, Cambridge)  suggests that κορωνίς alludes to the beaklike bow on Geometric ships. This interpretation seems unlikely since Homer uses the word steira to denote the beaklike bow or, more properly, the cutwater of a ship. See also Lenz, J.R. 1998 and Mark, S. 2005.

[4] The terms portside and starboard are not used in Homeric poetry, but they respectively indicate the left side of the ship (when looking from aft to forward) and the right side. The English expressions may originate from the Old Norse, the language spoken by the Vikings. They had the steering oar (stýri) mounted to the right-side board (borða). They would tie up at the wharf on the other side, hence the left side was called port.

[9] The term aphlaston is used in the Iliad, when Hector seizes a ship by the stern, and “would not loose his hold but held on to its curved stern [aphlaston]”. (Homeric Iliad 15.716, adapted from Sourcebook)

[15] These additional, non-Homeric, meanings are given in LSJ, at Perseus.

[18] The most famous ship ever, the Argo, garlanded with talismanic ornaments,  left others far behind, because her prow could speak and render prophecies. “Argus, by Athena’s advice, built a ship of fifty oars named Argo after its builder; and at the prow Athena fitted in a speaking timber from the oak of Dodona.”  Apollodorus, Library 1.9.16.

Attributions are based where possible by those shown by museums, or on Wikimedia Commons, at the time of publication on this website.

Rien and Hélène are members of the Kosmos Society.