Home » Featured, Travel » Kefalonia: the isle towards the sunset

Kefalonia: the isle towards the sunset

In recent posts, Rhodes: the isle of Helios and Thera: the island of many names, we visited two Greek islands on the Aegean Sea. In this post, we will be sailing towards the sunset, to a mountainous island that was home to a famous trickster.

19 I am Odysseus son of Laertes, and I, with all [pāsi] my acts of trickery, [20] I-am-on-the-minds-of [melō] all [pāsi] humans, and my glory [kleos] reaches all the way up to the sky. I live in Ithaca, where there is a high mountain called Neriton, covered with forests; and not far from it there is a group of islands very near to one another—Doulikhion, Samē, and the wooded island of Zakynthos. [25] It lies squat on the horizon, all highest up in the sea towards the sunset, while the others lie away from it towards dawn. It is a rugged island, but it breeds brave men, and my eyes know none that they better love to look upon.
Odyssey 9.19–27, Sourcebook[1] 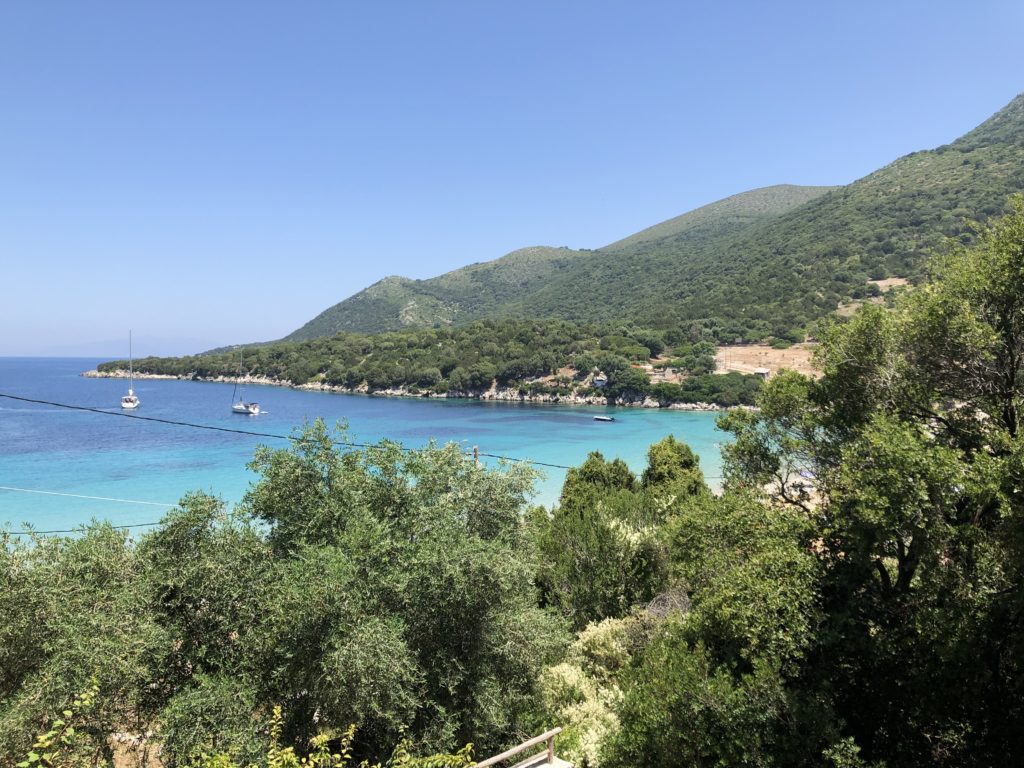 Odysseus says he is from an island that is “all highest up in the sea and towards the sunset;” in other words, this island is at the west, towards the sunset, and it is the farthest from the mainland and from the other islands since the others are towards the east and lie away from it towards dawn. Following Robert Bittlestone’s footsteps, we are going to Homeric Ithaka, the island of Kefalonia. Bittlestone, along with James Diggle of Cambridge University and John Underhill of the University of Edinburgh in Odysseus Unbound[2] guide the readers towards Kefalonia as the homeland of Odysseus by using geology and ancient texts. David Long[3] wrote an informative piece on this book.

The island, according to Pausanias, gets its name from the leader of the first inhabitants, Kephalos, who was exiled from Athens because he had killed his wife.

{1.37.6} There is a sanctuary in which are set statues [agalmata] of Demeter, her daughter, Athena, and Apollo. At the first it was built in honor of Apollo only. That is because, as they say, Kephalos the son of Deion, having helped Amphitryon to destroy the Teleboans, was the first to dwell [oikeîn] in the island that now is called after him Kephallenia, and they say that he resided [met-oikeîn] till that time at Thebes, exiled from Athens because he had killed his wife Procris. In the tenth generation afterwards Khalkinos and Daitos, descendants of Kephalos, sailed to Delphi and asked the god for permission to return to Athens. Pausanias Description of Greece 1.37.6 (Jones/Nagy) [4] 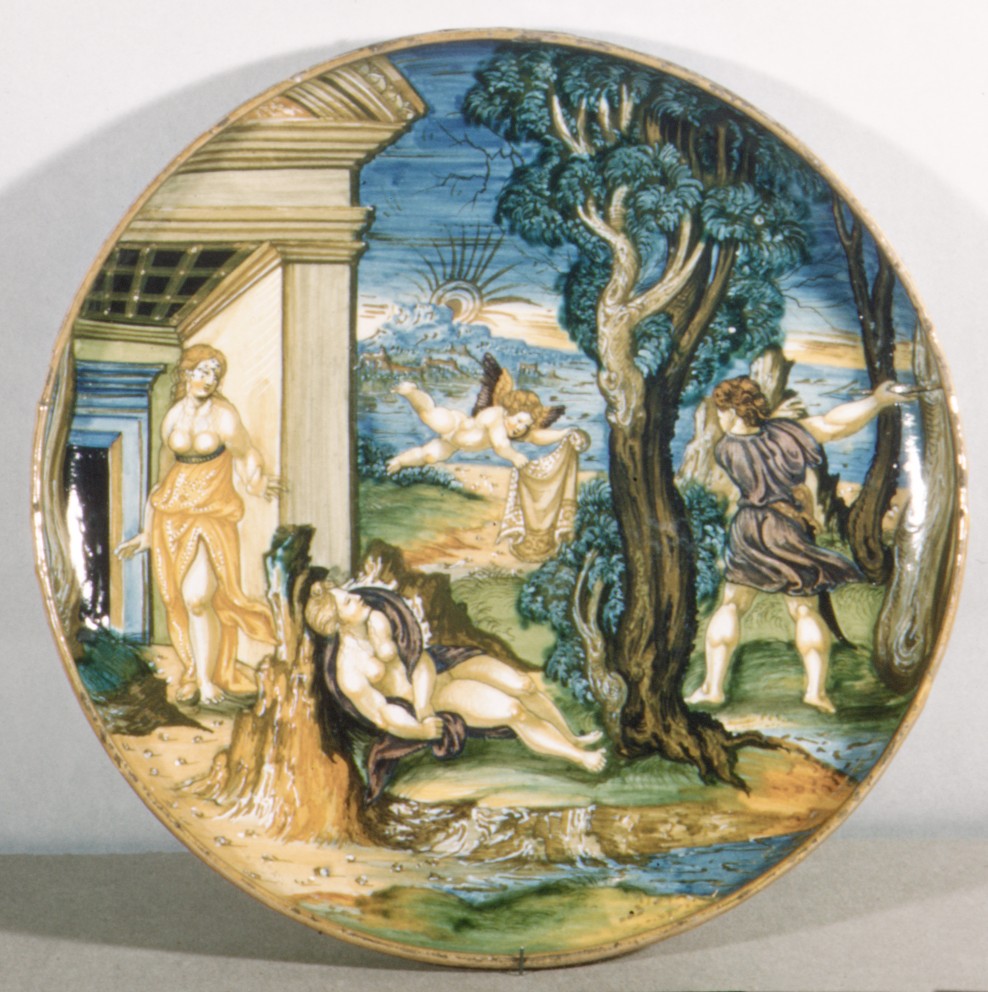 Why did Cephalus kill his wife? Pseudo-Hyginus says it was an accident.

When Cephalus, who was fond of hunting, had gone to the mountain in the early morning, Aurora [Eos], wife of Tithonus, fell passionately in love with him, and begged for his embrace. He refused, since he had given his promise to Procris. Then Aurora said : ‘I don’t want you to break faith, unless she has done so before you.’ And so she changed his form into that of a stranger, and gave him beautiful gifts to give to Procris. When Cephalus had come in his changed form, he gave the gifts to Procris and lay with her. Then Aurora took away his new appearance. When Procris saw Cephalus, she knew she had been deceived by Aurora, and fled to the island of Crete . . .
[Procris was eventually reunited with Cephalus] nevertheless out of fear of Aurora she followed him to watch him in the early morning, and hid among the bushes. When Cephalus saw the bushes stir, he hurled the unavoidable javelin, and killed his wife.
Pseudo-Hyginus, Fabulae 189[5]

In the Catalogue of Ships of the Iliad, the territory of Kephallenians spread throughout the Ionian Sea.

Odysseus led the brave Kephallēnians, who held Ithaca, Neriton with its forests, Crocyleia, rugged Aigilips, Samos and Zakynthos, [635] with the mainland also that was over against the islands. These were led by Odysseus, peer of Zeus in counsel, and with him, there came twelve ships.
Iliad 2.631–638 Sourcebook[6]

Thucydides mentions that the island has four parts.

[2] From thence they sailed to Cephalonia and subdued it without battle (this Cephalonia is an island lying over against Acarnania and Leucas and hath in it these four cities, the Pallenses, Cranii, Samaei, and Pronaei) and not long after returned with their fleet to Athens.
Thucydides The History of the Peloponnesian War 2.30 , translated by Thomas Hobbes[7] 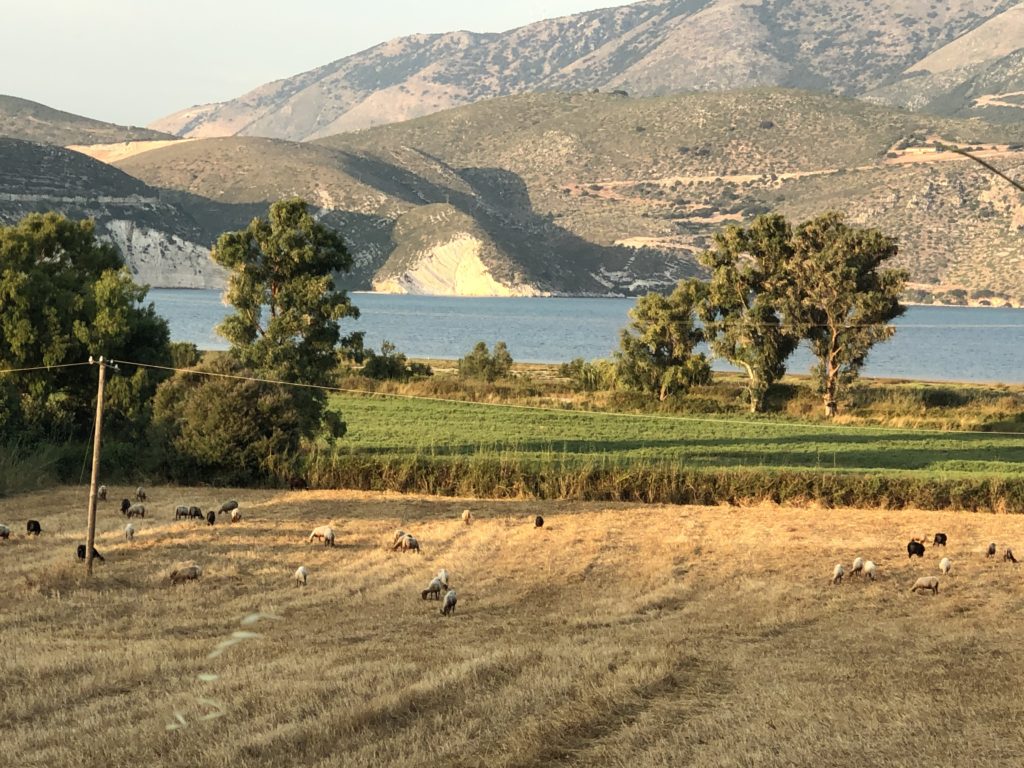 A view from the Paliki region

The Dictionary of Greek and Roman Geography ties four cities to four sons of Cephalus.

Strabo mentions the temple of Zeus on the largest mountain of the island; Mount Aenus.

Cephallenia lies opposite Acarnania, at a distance of about fifty stadia from Leucatas (some say forty), and about one hundred and eighty from Chelonatas. It has a perimeter of about three hundred1 stadia, is long, extending towards Eurus, 2 and is mountainous. The largest mountain upon it is Aenus, whereon is the temple of Zeus Aenesius; and where the island is narrowest it forms an isthmus so low-lying that it is often submerged from sea to sea. Both Paleis and Crannii are on the gulf near the narrows.
Strabo Geography 10.2.15[9]

Mount Aenus is the tallest mountain of the island and of all the other Ionian islands. It is covered with fir trees. 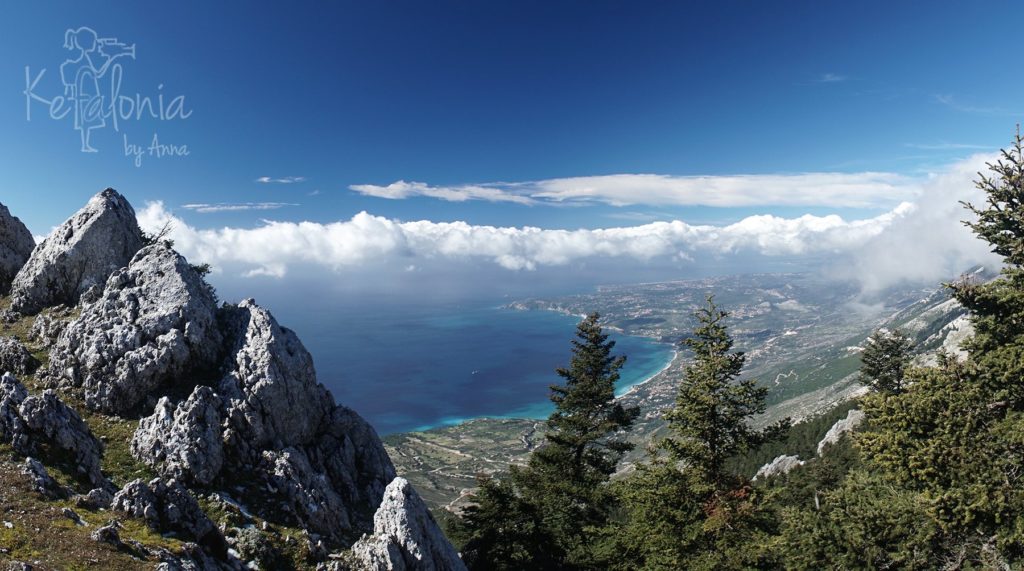 Poseidon, the Earth-shaker, to this day influences the island at the horizon, towards the sunset. Earthquakes are a sorrowful part of the history of Kefalonia. Perhaps Poseidon is still angry about Odysseus’ homecoming.

[4] A Pausanias Reader: An ongoing retranslation based on an original translation by W. H. S. Jones, 1918 (Scroll 2 with H.A. Ormerod), containing some of the footnotes added by Jones.
The retranslation, to date, is by Gregory Nagy | 2018.07.27

___
Janet Mayragul Ozsolak is a member of the Kosmos Society Editorial Team; and of the HeroesX Team, a MOOC on edX. She studied Sociology at Bogazici University, Istanbul, and has a MS in Education from the City College of New York. She considers Kefalonia her second home. 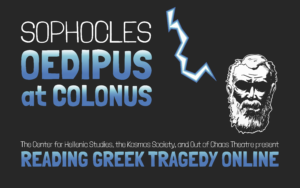