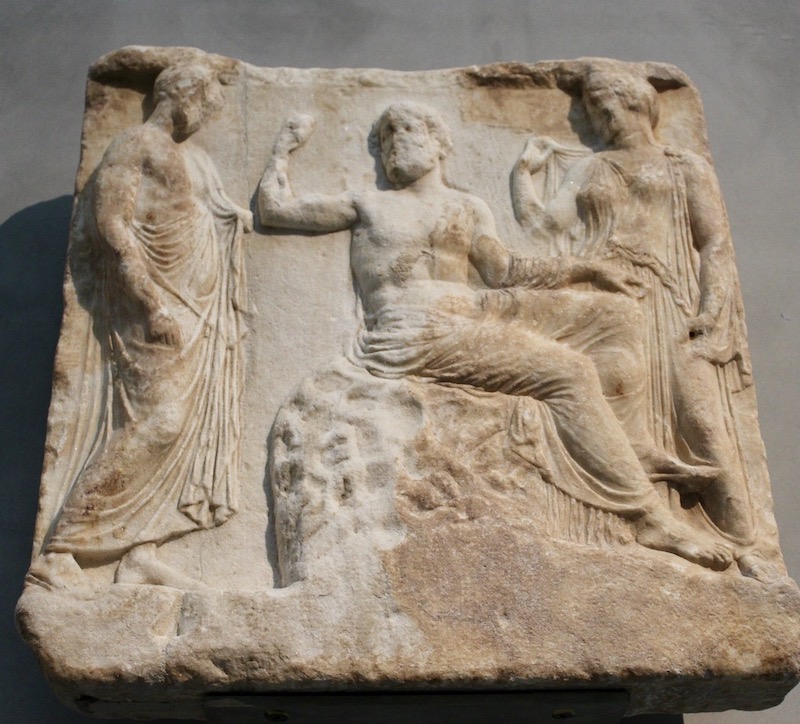 Asklepios sits between his daughter Hygieia and a man.

This Gallery will take you to the well celebrated world of medicine. In Homeric poetry doctors are precious, valued and well respected.

As Idomeneus says to Nestor in Iliad 11.514–551: “A physician is worth more than several other men put together, for he can cut out arrows and spread healing herbs.” (Sourcebook[1])

In Iliad Scroll 4, when Menelaos is wounded, Agamemnon sends for the doctor, surgeon, of the Greek army: Makhaon.

And powerful Agamemnon answered, “I trust, dear Menelaos, that it may be even so, [190] but the surgeon shall examine your wound and lay herbs upon it to relieve your pain.
Iliad 4.188–191

And he treats Menelaos’ wound with dexterity.

Makhaon passed into the middle of the ring and at once drew the arrow from the belt, bending its barbs back through the force with which he pulled it out. [215] He undid the burnished belt, and beneath this the cuirass and the belt of mail which the bronze-smiths had made; then, when he had seen the wound, he wiped away the blood and applied some soothing drugs which Cheiron had given to Asklepios out of the good will he bore him.
Iliad 4.212–220

Makhaon also heals Philoctetes according to another legend.

Makhaon and Podaleirios are doctors who according to the legend were sons of the god of medicine Asklepios. Cheiron is also mentioned as a well skilled healer.

Cheiron even showed Achilles how to treat wounds, and Achilles in return shared his knowledge with his companion Patroklos, as described in Iliad 11.823–835:

Wounded Eurypylos made answer, “Noble Patroklos, there is no hope left for the Achaeans but they will perish at their ships. All they that were princes among us [825] are lying struck down and wounded at the hands of the Trojans, who are waxing stronger and stronger. But save me and take me to your ship; cut out the arrow from my thigh; wash the black blood from off it with warm water, and lay upon it those gracious herbs [830] which, so they say, have been shown you by Achilles, who was himself shown them by Cheiron, most righteous of all the centaurs. For of the physicians Podaleirios and Makhaon, I hear that the one is lying wounded in his tent and is himself in need of healing, [835] while the other is fighting the Trojans upon the plain.”

Asklepios also had a famous daughter named Hygieia. She was the goddess of health. She was worshiped in several places. From her we get the word hygiene.

Later in historical times, another “descendant” of Asklepios, is the famous physician Hippocrates from whom we get the Oath and several books.

Marble relief representing part of a leg with an inscription dedicating it from Tyche to Asclepius and Hygieia as a thank offering, presumably for the cure of some affliction of the left leg. 100–200 CE. From Shrine of Asklepios. British Museum
The inscription reads: ΑΣΚΛΗΠΙΩ ΚΑΙ ŸΓΕΙΑ ΤΥΧΗ ΕΥΧΑΡΙΣΤΗΡΙΟΝ [Asklēpiō kai Hugeia Tukhē eukharistērion], translated by the British Museum as
‘Tyche [dedicated this] to Asklepios and Hygieia as a thank offering’
Creative Commons Attribution-NonCommercial-ShareAlike 4.0 International (CC BY-NC-SA 4.0) license.
© The Trustees of the British Museum

Hélène Emeriaud is a HeroesX Team member, a MOOC on edX. She studied ancient Greek at school in France and for several years at the University of Minnesota. She holds a degree in Education from Montreal University, and a Master of Education from McGill University. She is an active participant and member of the Editorial Team in the Kosmos Society with a particular interest in ancient Greek and Latin language learning.