We are pleased to announce that the HeroesX Sourcebook is now available for download from the Hour 25 Text Library as both an epub file and PDF. 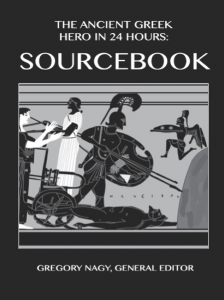 The Sourcebook of Original Greek Texts Translated into English contains accessible and enhanced translations of all the primary texts discussed in Nagy’s The Ancient Greek Hero in 24 Hours, making it the perfect companion volume for those working through H24H or other HeroesX content. Yet the Sourcebook  also stands on its own as a unique, open-source publication. Edited with the help of Nagy’s fellow teachers and researchers, these translations are enhanced with transliterated Greek tags that to allow readers to track the use of key terms and concepts.

Here’s how Nagy describes the Sourcebook in H24H. “The process of editing this Sourcebook is an ongoing project that I hope will outlast my own lifetime. All the translations in this online Sourcebook are free from copyright restrictions. That is because the translations belong either to me or to other authors who have waived copyright or to authors who died in a time that precedes any further application of copyright. The texts of these translations in the Sourcebook are periodically reviewed and modified, and the modifications are indicated by way of special formatting designed to show the differences between the original translator’s version and the modified version.”

The texts provided include: the Homeric Iliad and Odyssey; Hesiod’s Theogony and Works and Days, Homeric Hymns, a selection of lyric poetry by Alcman, Sappho, and Pindar; Agamemnon, Libation Bearers, and the Eumenides by Aeschylus; Oedipus at Cononus and Oedipus Tyrannus by Sophocles; the Hippolytus and Bacchae of Euripides; selections from Aristotle, Herodotus, and Pausanius; and Plato’s Apology and Phaedo.