We are pleased to share this segment in the Center for Hellenic Studies series on reading Homeric epic in ancient Greek. In each installment we read, translate, and discuss a small passage in the original Greek in the most accessible way. In this segment, Gregory Nagy, Leonard Muellner, and Douglas Frame read Odyssey 1.136–143. Topics include: hand-washing before a meal, types of food, how the food was served, and more! Read more…

The point tore through the ambrosial robe which the Graces had woven for her, and pierced the skin between her wrist and the palm of her hand, so that the immortal blood or ikhōr, that flows in the veins of the blessed gods, came pouring from the wound; for the gods do not eat bread nor drink wine, hence they have no blood such as ours, and are immortal. Iliad V

Where I grew up, bread was sacred. If you ever found a piece of bread on the ground, you would kiss it- a way of reverence- and put on a higher place. Bread was/is valued as a gift of god, as a portion of hard work and a vital part of survival of humankind. Read more…

The point tore through the ambrosial robe which the Graces had woven for her [=Aphrodite], and pierced the skin between her wrist and the palm of her [=Aphrodite’s] hand, so that the immortal blood,[340] or ikhōr, that flows in the veins of the blessed gods, came pouring from the wound; for the gods do not eat bread nor drink wine, hence they have no blood such as ours, and are immortal. Iliad V 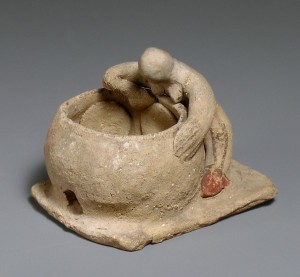 Where I grew up, bread was sacred. If you ever found a piece of bread on the ground, you would kiss it- a way of reverence- and put on a higher place. Bread was/is valued as a gift of god, as a portion of hard work and a vital part of survival of humankind. It needed to be respected. Bread was an important staple in ancient Greek antiquity as well. The meaning of bread far exceeded its nutritional value.

The Homeric Iliad states a clear distinction between mortal men and immortal gods. Gods do not drink wine nor do they eat bread. Eating bread is a significant part of being human. From grain to a loaf of bread, the process has been engraved in cultures as a sign of friendship, civilization, hospitality and basic necessity.

We see a mention of bread in Odyssey scroll 4, when Eurykleia assures Penelope that Telemachus has all he needs for his trip to learn about his father:

Eurykleia said, “You may kill me, Madam, or let me live on in your house, whichever you please, but I will tell you the real truth. [745] I knew all about it, and gave him everything he wanted in the way of bread and wine, but he made me take my solemn oath that I would not tell you anything for some ten or twelve days, unless you asked or happened to hear of his having gone, for he did not want you to spoil your beauty by crying.

Kalypso also sends Odysseus with care and bread in scroll 8:

I stayed with Kalypsō seven years straight on end, and watered [260] the good clothes she gave me with my tears during the whole time; but at last when the eighth year came round she bade me depart of her own free will, either because Zeus had told her she must, or because she had changed her mind [noos]. She sent me from her island on a raft, which she provisioned [265] with abundance of bread and wine.

Herodotus in Book 2.168 uses σῖτον ἔδοντες, ‘eating grain/bread’, a general epithet of men as opposed to beasts. In Book 2, 286, he talks about an experiment, undertaken by the Egyptian king Psammetichus, to determine the most ancient people in the world.

Now the Egyptians, before the reign of their king Psammetichus, believed themselves to be the most ancient of mankind. Since Psammetichus, however, made an attempt to discover who were actually the primitive race, they have been of opinion that while they surpass all other nations, the Phrygians surpass them in antiquity. This king, finding it impossible to make out by dint of inquiry what men were the most ancient, contrived the following method of discovery:- He took two children of the common sort, and gave them over to a herdsman to bring up at his folds, strictly charging him to let no one utter a word in their presence, but to keep them in a sequestered cottage, and from time to time introduce goats to their apartment, see that they got their fill of milk, and in all other respects look after them. His object herein was to know, after the indistinct babblings of infancy were over, what word they would first articulate. It happened as he had anticipated. The herdsman obeyed his orders for two years, and at the end of that time, on his one day opening the door of their room and going in, the children both ran up to him with outstretched arms, and distinctly said “Becos.” When this first happened the herdsman took no notice; but afterwards when he observed, on coming often to see after them, that the word was constantly in their mouths, he informed his lord, and by his command brought the children into his presence. Psammetichus then himself heard them say the word, upon which he proceeded to make inquiry what people there was who called anything “becos,” and hereupon he learnt that “becos” was the Phrygian name for bread. In consideration of this circumstance the Egyptians yielded their claims, and admitted the greater antiquity of the Phrygians.

Hesiod in the Theogony also uses the consumption of bread as a marker of men:

[510] also she [=Klymene] bore very glorious Menoetius and clever Prometheus, full of various wiles, and scatter-brained Epimetheus who from the first was a mischief to men who eat bread.

[490]I shall be brought to Hellas, a slave in my old age. And there the tasks that least befit the evening of my life will they impose on me, Hector’s mother, to watch their gates and keep the keys, or bake their bread, and on the ground instead of my royal bed [495] lay down my shrunken limbs, with tattered rags about my wasted frame, a shameful garb for those who once were prosperous.

Was making one’s own bread a sign of low social standing? Was this a chore for the poor and slaves? How do you see the meaning of bread in your society? What does bread symbolize? Please join in the conversation!

Janet M. Ozsolak is a member of Hour 25.