A Californian Hymn to Homer 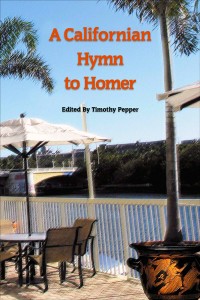 Much as an ancient hymnist carries a familiar subject into new directions of song, the contributors to A Californian Hymn to Homer draw upon Homeric scholarship as inspiration for pursuing new ways of looking at texts, both within the Homeric tradition and outside it. This set of seven original essays, accompanied by a new translation of the Homeric “Hymn to Apollo,” considers topics that transcend traditional generic distinctions between epic and lyric, choral and individual, performed and literary. Treating subjects ranging from Aeschylus’s reception of Homeric anger to the representation of mantic performance within Early Islamic texts, the collection presents a selection of imaginative critical work done on the West Coast by scholars of antiquity.

Timothy Pepper describes the publication in the Proöimion,

Not unlike ancient Greek hymns, Α Californian Hymn to Homer begins with the origins of its subject: the contributors to this volume first came together for a seminar given by Gregory Nagy during his Sather Professorship at the University of California at Berkeley in the spring of 2002. The essays here grew from our collaboration in that seminar, our discussions of Nagy’s Sather lectures within and without the classroom, and our later exchange of papers and ideas with Nagy’s enthusiastic encouragement. Though one may read the title of this volume as a statement of our collective interest in and admiration for the insights Homeric poetry and its scholarship provide, it is significant in another sense as well. All of the contributions engage in some way with Homeric material; most comment on the poems directly, while others find approaches in the study of Homer to apply to other aspects of Mediterranean cultures.

You can view all the CHS publications here!