An Interview with Homer 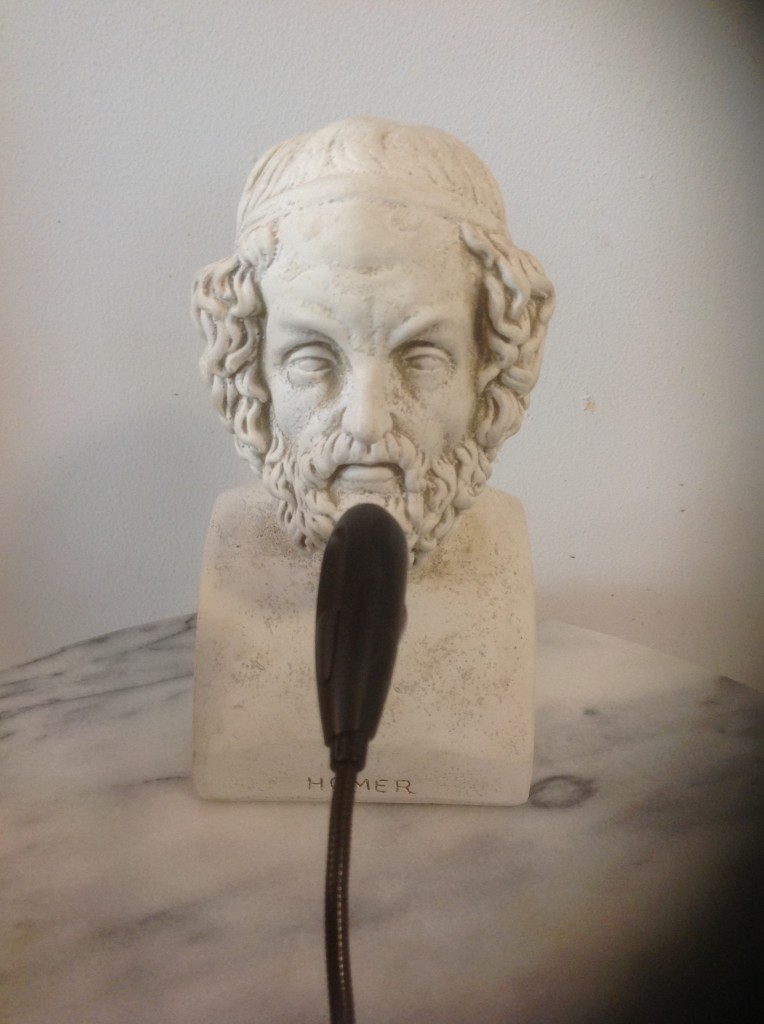 The ancients seem to have had as many questions about Homer as we moderns do. At the end of the Apology, Plato has Socrates wonder aloud how marvelous it would be if we could anticipate actually meeting and conversing with Homer (along with Orpheus, Musaeus, and Hesiod) in the afterlife: “…if this be true, let me die again and again.” (41a, Sourcebook).

While the analysis presented by Gregory Nagy and Leonard Muellner in HeroesX and Hour 25 approaches Homeric epic as the product of oral traditions that evolved over many, many generations, it is a historical fact that the ancient Greeks attributed the Iliad and the Odyssey to an individual master poet called Homer (H24H 0§26–31). In the second century CE, a Syrian Greek writer of satire known as Lucian of Samosata imagined going on a fantastic journey that took him to the court of Rhadamanthus in the Underworld, among other places. There, his main character had an opportunity that any journalist would envy, the truly big interview—with Homer.

What questions would you ask Homer, given the opportunity? Here is the Q & A session that Lucian, writing almost two millennia ago, reported:

Q: I asked him, among other things, where he came from; it was still a burning question with us, I explained.

A: He said he was aware that some brought him from Chios, others from Smyrna, and others again from Colophon; the fact was, he was a Babylonian, generally known not as Homer, but as Tigranes; but when later in life he was given as a homer or hostage to the Greeks, that name clung to him.

Q: Another of my questions was about the so-called spurious lines; had he written them, or not?

A: He said they were all genuine; so I now knew what to think of the critics Zenodotus and Aristarchus, and all their lucubrations.

Q: Having got a categorical answer on that point, I tried him next on his reason for starting the Iliad at the wrath of Achilles.

A: He said he had no exquisite reason; it had just come into his head that way.

Q: Another thing I wanted to know was whether he had composed the Odyssey before the Iliad, as generally believed.

A: He said this was not so.

Q: As to his reported blindness, I did not need to ask; he had his sight, so there was an end of that.[1]

The interviewer goes on to report that it became his habit, whenever he saw the poet at leisure, to go up and ask him things. Homer was reported to have answered quite readily — especially after his acquittal. It seems that a libel suit had been brought against him by Thersites, on the ground of the ridicule to which he was subjected in the Iliad. Homer was ably represented in the court case by Odysseus, and thus he was acquitted.

So how do you think the interviewer did? Did he earn his journalistic mettle at a time centuries before journalism was invented? What important questions did he leave out that you would have asked? According to Socrates, we might all get a similar chance in the afterlife, so we had better be prepared.

Laura Ford is a retired teacher living in central Virginia.