Ancient Greek for pre-school children: An interview with Paraskevi Foti

Paraskevi Foti has written a doctoral dissertation on teaching ancient Greek to pre-school children in Greece, using Aesop’s Fables, and music[1]. Here, she shares some insights from her research.

Why did you decide on this subject?

This doctoral dissertation includes four of my great affections: the ancient Greek language, Aesop’s myths, music and Kindergarten. Through this research-action, I wanted to investigate if I can bring the children into contact with this wonderful language in a fun and enjoyable way for them by using the appropriate teaching tools.

How did you learn ancient Greek at school and how would your approach change the current practices?

Can you outline your methodology and findings?

Τhe contribution of this book is young ages of children with the help of Aesop’s fables and music to approach the ancient Greek language. Music, ancient Greek, myths of Aesop and the exercises that have been designed and implemented in children, I believe are the most important elements of this method of learning and approaching ancient Greek.

The researcher designed the educational intervention program about the contribution of ancient Greek through Aesop’s fables set to music, to six randomly selected schools and to a total sample of 176 children, in approximately equal percentage of gender, boys and girls. The analysis and results obtained from the quantitative and qualitative research methods used, concern:

The contribution of the ancient Greek language through music was investigated in the five tests, which were evaluated by the researcher, in areas such as comprehension, time perception, matching, visual ability and visual-perceptual ability. While at the beginning of the intervention program the performances were lower, however, throughout the sample they showed an upward trend in the course of the program, which was consistently improved in both the second fable and the third. The data[2] show that the educational intervention program of ancient Greek with music and fables of Aesop, had a positive impact on the understanding of the children, who in the course of the educational intervention understood more and more the ancient Greek language through a playful—according to their age—and musical approach to the fables of Aesop.

The children responded to the approach of ancient Greek and showed significant progress in both time sequence and visual, as well as visual-perceptual ability. In the visual ability exercises which concerned the familiarization of children with accent through the game of hats, which was analyzed in previous section, pupil performances were high, but there was also an upward trend.

It should be noted that the performances of the children who showed an upward trend in the educational program of ancient Greek that took place in the six schools, the highest percentage of evaluation was identified in the activities of matching ancient Greek with modern Greek. The children, therefore, showed through their exercises and activities they performed that they understood the connection between the ancient Greek language and the modern Greek language, while at the same time they realized that many words were very similar to each other or that they were exactly the same.

The results of the contribution of music in this specific intervention program of ancient Greek are analyzed in each of the five parameters of the music behavior observation list and was improved in all five categories.

As derives from the results briefly analyzed[2], the educational intervention program has been successful both in terms of children’s contact with ancient Greek through the fables of Aesop and in the successful contribution of music to this project, contributing also to the musical development of the children. The success was due to the fact that the organized educational program, mainly triggered the interest of both children and parents, while after careful processing of the data of the questionnaires given to the parents of the children, not only the children showed interest in this educational intervention program, but parents and teachers as well.

Why did you choose Aesop to introduce ancient Greek to children?

The fact that ‘aesopean fables’ with their autonomy within the corpus of works which are attributed to Aesop or with their various adaptations, which are often delineated, have nourished and keep nourishing many generations, they are irrefutable elements of their value; many of their verbalizations, unabridged, translated or adapted, circulate the levels of spoken word as distillations of life or spiritual experiences. I love ‘aesopean fables’ and I strongly believe that was the smartest and most creative way to reach children and children to learn pleasantly and cheerfully!

How did you approach the pronunciation of ancient Greek?

In the proposal of this doctoral dissertation, the main examination question was the approach of ancient Greek in a playful manner, which combines the narration of Aesop’s fables set to music and song, and the results of this playful educational intervention in the development of the pre-school child. Music and language possess common characteristics such as intonation, rhythm, volume, pauses, pitch, but they also had a direct relation with the processing of sounds that both carry in their own unique way. For language, clarity was the main characteristic, whereas for music, that is emotion.

Therefore, speech, language and music were linked and that was evident since the first steps of human development. ‘Dressing’ Aesop’s fables with music and, further on, the song in the ancient Greek language that followed, with short words from the fable and combined with images, created a song-story, a practical method of song, speech and music combination which we believe was the originality point of this ancient Greek teaching proposal. The accompaniment of the song-story was conducted with the mouth, the body and the instruments of the ORFF system, which, experience has shown excited and maintained the interest of pre-school children.

After all, the ancient Greek language is characterized by a certain musicality. The accents of the Greek language are musical notations which, along with the rules, protect a predominantly musical language from discordance, as in the case of the counterpoint which is taught in conservatories, or the sharps and flats which correct cacophonous chords. We believe that approaching ancient Greek through music, musical-kinetic play and the power of images with intense-vibrant colors helped us to captivate the interest and attention of pre-school students and keep it unabated. Ancient Greek became a game!!

[1] Paraskevi Efsratiou Foti: “The Contribution of the Ancient Greek Language and Art in Pre-School Education Through Aesop’s Fables Set to Music.” Doctoral dissertation submitted to National and Kapodistrian University of Athens. Available on academia.edu.

In terms of visual ability with practicing accents, the average performance in the first fable is 77.33%, the second fable is 86.55% and the third rises to 94.15%.

Finally, in terms of visual-perceptual ability with practicing the accents, the average performance of children is 70.54%, in the second fable 77.78% and, finally, in the third fable rises to 86.70%. 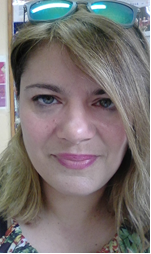 Paraskevi Foti is head of the 4th Kindergarten of Agia Varvara in Greece and appointed as a kindergarten teacher since 2000. She has a degree in piano and theory at the National Conservatory of Athens and completed her Master’s in 2006 with a diploma thesis on intercultural education in Greek Open University. She completed her second degree, after qualifying examinations, in the Department of Philosophy of Pedagogy and Psychology of the National and Kapodistrian University of Athens with specialization in Psychology in 2011. In the same University department, she drafted a PhD entitled: “The Contribution of the Ancient Greek Language and Art in Pre-School Education Through Aesop’s Fables Set to Music and the Added Value of ICT Technology”

She has published a book entitled Otherness, Prejudice and Stereotypes in the School Class. Methods of Management by the Teacher (Gregori Publishing, 2016) and has participated in a collective volume titled Didactic scenarios through the ICT. (Gregory Publishing, 2017). She also has papers in international and Greek conferences as well as in scientific journals. She has a strong interest in Ancient Greek Language, in the importance of music and, finally, in Information and Communication Technologies and in their contribution to her teaching work, while she is an eTwinning and moodle trainer who actually supports open source software.

Featured image: The Tortoise and the Hare, Project Gutenberg,