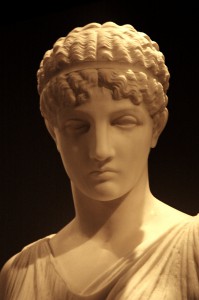 Imagine attending the Theater of Dionysos in 442 B.C.E. when Sophocles’ Antigone was first produced.  What did the Ancient Greek sound like?  What emotions did it stir in the audience?  Whose perspective would we share?  Which arguments would sway you?

In order to capture the power of the language and the dramatic intensity of the play, the Hour 25 community is delighted to announce that two groups of high school students will perform a selected passage of the tragedy, the moment when Creon confronts Antigone and Ismene over the burial of their brother (l. 441–582).  The first group of students, working with members of the Center for Hellenic Studies in Nafplion, Greece, will film their performance in Ancient Greek, which we will then share on the Hour 25 website.  A second performance of the same passage will be in English by a group of students in the United States and it, too, will be posted on the Hour 25 website.  Together, the two performances will allow members of our community to experience this play in the same spirit as the audience of over two thousand years ago.

We look forward to sharing with the Hour 25 community this international collaboration and look forward to the discussions we will have with both the members of our community and the performers as they share their perspectives with each other of working closely with this beautiful text.