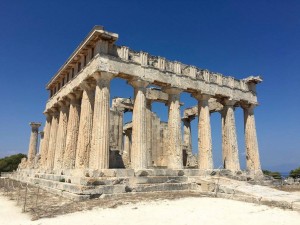 To visit Greece is an experience filled with emotions. Long ago, I traveled to the beautiful island of Aegina. The isle is in the Saronic Gulf, not far from Athens. The vision of the temple of Aphaia is amazing. I dedicate this post to Myrmidon, who is our talented Friday Café host, because the island of Aegina is where Myrmidons liked to train. According to Hesiod (Hesiod F 205 via Scholia for Pindar Nemean 3.21), Aegina was their birth place.[1] Zeus turned numerous ants that were in Aegina into humans. The Greek word for ant is murmex, and this is how Myrmidons obtained their name. 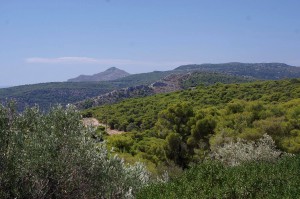 Homer in the Iliad, in the ‘Catalogue of Ships’ Book 2, mentions Aegina, and the young people who came from Aegina to Troy, but he does not name the temple. 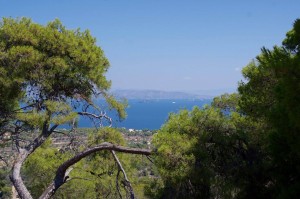 The men of Argos, again, and those who held the walls of Tiryns, with Hermione, and Asine upon the gulf; Trozen, Eionai, and the vineyard lands of Epidauros; the Achaean youths, moreover, who came from Aegina and Mases; these were led by Diomedes of the loud battle-cry, and Sthenelos son of famed Kapaneus. With them in command was Euryalos a godlike man, son of king Mekisteus, son of Talaos; but Diomedes of the great war cry was chief over them all. With these there came eighty ships. 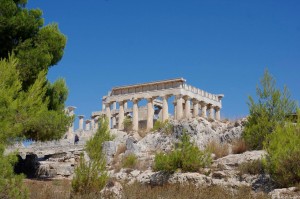 Aegina is the land where the Myrmidons loved to train. Pindar wrote many Odes celebrating Aegina.

Queenly Muse, our mother! I entreat you, come in the sacred month of Nemea to the much-visited Dorian island of Aegina. For beside the waters of the Asopus young men are waiting, craftsmen of honey-voiced  victory-songs, seeking your voice. Various deeds thirst for various things; but victory in the games loves song most of all, the most auspicious attendant of garlands and of excellence. Send an abundance of it, from my wisdom; begin, divine daughter, an acceptable hymn to the ruler of the cloud-filled sky, and I will communicate it by the voices of those singers and by the lyre. The hymn will have a pleasant toil, to be the glory of the land where the ancient Myrmidons lived… 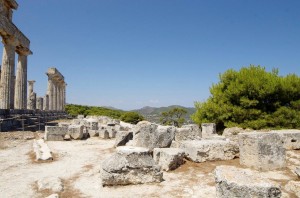 Who was this goddess who deserved such a beautiful temple? Pausanias describes the origins of the Sanctuary of Aphaia. According to Pausanias, Aphaia was made a goddess by Artemis. She is also called Britomartis, and Dictynna. 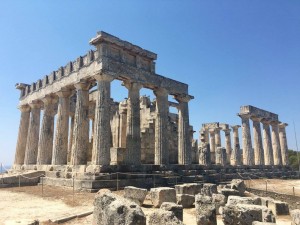 In Aegina, as you go towards the mountain of Zeus, God of all the Greeks, you reach a sanctuary of Aphaea, in whose honor Pindar composed an ode for the Aeginetans. The Cretans say (the story of Aphaea is Cretan）that Carmanor, who purified Apollo alter he had killed Pytho, was the father of Lubulus, and that the daughter of Zeus and of Carme, the daughter of Eubulus, was Britomartis. She took delight, they say, in running and in the chase, and was very dear to Artemis. Fleeing from Minos, who had fallen in love with her, she threw herself into nets which had been cast aphemena for a draught of fishes. She was made a goddess by Artemis, and she is worshipped, not only by the Cretans, but also by the Aeginetans, who say that Britomartis shows herself in their island. Her surname among the Aeginetans is Aphaea; in Crete it is Dictynna（Goddess of Nets).

Pausanias History of Greece 2.30.3 on Perseus 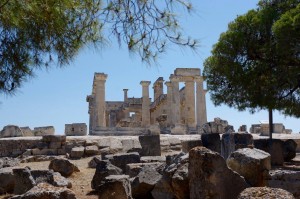 What was so important about Aphaia? Why build such a beautiful sanctuary for her? Was it because she was close to Artemis? Was it because she resisted, and did not succumb to Minos’ sexual advances? Why did she become “identified with the goddesses Athena and Artemis”? 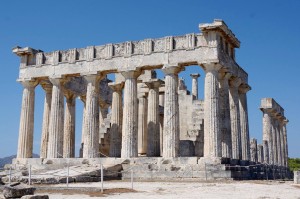 Aphaea (Greek: Ἀφαία, Aphaía) was a Greek goddess who was worshipped almost exclusively at a single sanctuary on the island of Aegina in the Saronic Gulf. She originated as early as the 14th century BCE as a local deity associated with fertility and the agricultural cycle. Under Athenian hegemony, however, she came to be identified with the goddesses Athena and Artemis and with the nymph Britomartis as well, by the 2nd century CE, the time of Pausanias.
Wikipedia 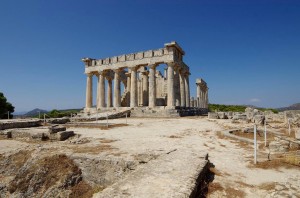