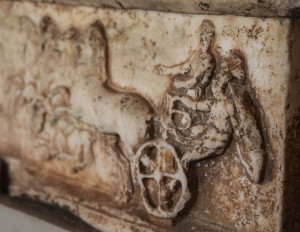 I submit that the moment when a fully-armed warrior or contestant in an apobatic[1] chariot race releases his firm right-hand grip on the left handle bar of a speeding chariot and leaps into mid-air, he is daimoni īsos[2], equal to a super-human force. Just as when the hero warrior is confronted with death in battle he is equal to an unspecified super-human force, usually his antagonistic god, and when the bride and bridegroom at the wedding ritual are equal to Arēs and Aphrodite, the apobatēs who leaps from the chariot is hurled into mid-air where his old life hangs in the balance, very much dependent on his fate and his skill in ‘hitting the ground running’; at that gravity-defying frozen moment one might say he is equal to the apobatic gods, in particular Athena, the prototypical apobatic fighter[3].

I used to be an apobatēs of sorts. It was a horseless chariot I rode in, but it had plenty of horsepower. Thirty years ago I would ride the public buses that ploughed the streets of Karachi to get to and from school, carrying on my shoulders a heavy bag laden with books filled with solid knowledge. These ‘chariot’ buses of Karachi were lovingly adorned by their owners with decoration, ablaze like polished bronze in the sun. Power horns had recently gained popularity and were employed by buses to forge a sonic path through crowded streets as they raced other buses to their destinations.

During these races, schedules and bus-stops were of no consequence. It was up to the unfortunate passenger wishing to alight at his notional stop to indicate his intention to the driver of the speeding bus by making his way to the rear exit of the bus, hanging out by holding on to the railing with his right hand and slapping the side of the bus with one forceful whack. This task was sometimes performed by an obliging conductor should he happen to be floating around the exit at the time, but it usually formed part of the overall apobatic maneuver.

Technically, if a driver hears one slap it should mean ‘stop’; two slaps mean ‘go’. In practice, during a bus race, one slap means ‘slow down ever so slightly so as to allow one or more passengers to jump off without guaranteed injury but so as not to lose ground in the race against a competing bus driver who was fortunate not to have any passengers alighting at that stop’.

So the sēma or sign has been made to the driver and I, having battled myself through the unruly throng inside the bus to get to the exit, am now precariously hanging out of the portal, my faithful right hand gripping the rusted railing, my right leg firmly planted on the floor, my left arm studying the swirling air currents outside, my left leg doing much the same. The conductor prods my trusty shield (school bag) behind me, indicating that I need to get off the bus quickly, anxious not to lose time in the life- and-death chase. But I don’t jump, cautious that my legs would not withstand such an impact at this speed, so I give the driver another sēma, this time more pronounced and desperate. Whack!

The bus almost imperceptibly slows down and I make some lightning-quick calculations. I leap into mid-air, for a fraction of a second flying parallel to the chariot, my bag-shield weightless behind me. I am immortalized in this moment, daimoni īsos, like the goddess Athena. Although I didn’t know it at the time. No, it didn’t really feel god-like at the time. I was preoccupied (in no particular order) with the angle of impact, making sure no one was standing in my path where I would eventually hit the ground, bracing my legs for the rude shock, and generally concerned about how far away from my supposed bus stop I was going to end up, having seen it whizz by the corner of my eye.

I feel the earth shudder as I land in splendor, shield riding high behind me. Running at the height of my speed to disperse the forces of impact, in the same direction as the chariot that has now regained full speed and which has now resumed the chase in the distance with the conductor frantically slapping the side with double-whacks. I hear in Doppler his call to passers-by: “Lasbela, Goli-Mar, Chhorangi, Saat (seven) Number, Chhe (six) Number, Paposh, Paposh, Paposh!!”, proclaiming the route of the bus but offering not a hope-in-hell to anyone wanting to join the journey.

Barely able to prevent myself from tumbling over, after about 50 or 70 yards I begin to decelerate as I gain control of the forward impetus. Worn-out leather shoes steaming, drenched in sweat I come to a halt and get my bearings. Not too bad today; just a quarter mile from my designated stop. I slowly walk home, wearied from the fight. Until tomorrow.

Now I look back on this life experience with the lens of the apobatic chariot warrior, revealed to me through The Ancient Greek Hero in 24 Hours, taught by Professor Gregory Nagy of Harvard University. I believe this is an example of how a study of the Humanities can provide new lenses on life and connections that are meaningful. To think that there are parallels between what I was routinely doing as a child going to and from school and the glorious apobatic chariot tradition of ancient Greece! A parallel that I can only form with this new-found knowledge that allows me to time-warp and assign a completely new and fulfilling meaning to a memory. Thank you, HeroesX.

Safdar lives in Dubai, originally from Pakistan, and is (or was) a career banker of 22 years.  He is now in search of a new identity and first joined HeroesX v.4, after which he traveled with Professor Nagy who led the travel-study program to Greece in June 2016.  With his new-found passion for ancient Greek literature, he plans to learn and participate on the Hour 25 Forums as much as possible.

[1] An apobatic chariot race is one where the contestant in full body armor (the ‘apobatēs’) leaps off a horse-led chariot in motion. The equivalent in battle is referred to as apobatic chariot fighting. The Ancient Greek Hero in 24 Hours, Hour 7b.