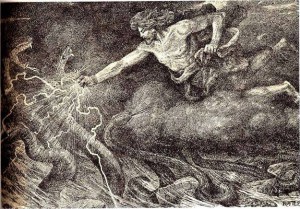 The Heritage of Armenian Literature [1] opens up with a chapter about oral tradition. The information about the Armenian oral tradition comes from the History of the Armenians by Moses of Khoren. He mentions different forms of story telling about the ancient Armenian heroes. Zruyts “old and unwritten stories, to which Moses of Khoren attaches a high degree of credibility. Less credible ones, what he terms araspels or legends which he admits sometimes contains historical events… Storyteller’s songs, yergk vipasanats and tvelyatsn yergk, metrical songs, are the other two terms.”  Songs were sung by gusans. Gusans sing and compose in performance.

Not many songs survived to this day. When Armenians converted to Christianity, religious leaders were not tolerant of stories that contained ancient Armenian deities. Ironically, all we know from that period came to us by Moses of Khoren who was a man of the church. He understood the importance of the Armenian song culture in understanding the Armenian history and culture.

The Birth of Vahagn is one of the songs Moses of Khoren mentions in his book. Prof. Nagy touched upon this song in Hour 21 of the Ancient Greek Hero in 24 Hours.

…“ I argue, to Indo-European mythology, since there is a corresponding idea attested in Indo-Iranian traditions and assimilated into Armenian heroic narratives (by way of Iranian models). I have in mind here a song preserved in the History of the Armenians by Moses of Khoren (1.31): this song pictures the cosmic moment when the dragon-slayer Vahagn is born from a reed that is said to be in labor as it expels first a burst of smoke, then a burst of flame, and then, out of the flame, a youth with his hair on fire and with eyes that are two suns.” 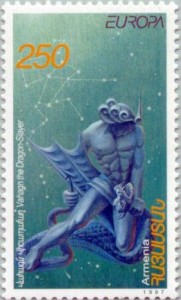 Another translation is from Indo-European Language and Culture: An Introduction  by Benjamin W. Fortson, IV, [page 395]

Contributions to Comparative Mythology: Studies in Linguistics and Philology edited by Stephen Rudy, pages, 27–29 gives information about the etymology and the cognates of the name Vahagn.

Vahagn is known as the fire-god, god of war and courage. His epithet vishapakagh,‘dragon slayer’, along with the fire element remind us of Hercules.

In this song, the sea is described as purple. Hour 25 hosted a series of blogs on ‘purple sea‘.

Janet M. Ozsolak is a mother, teacher and active member of Hour 25!