Best of all things is water

When Pindar says “Water is best, (ἄριστον μὲν ὕδωρ) and gold, like a blazing fire in the night, stands out supreme of all lordly wealth” in Olympian 1, he is not wrong. Life happens around water. It is hard to find an example that water is not present in our daily lives. Water cleans, nourishes, and heals. Who wouldn’t enjoy a nice bath? How about the ancient Greeks? In this post, I will focus on passages about bathing scenes, washing scenes and healing waters in Greek antiquity. 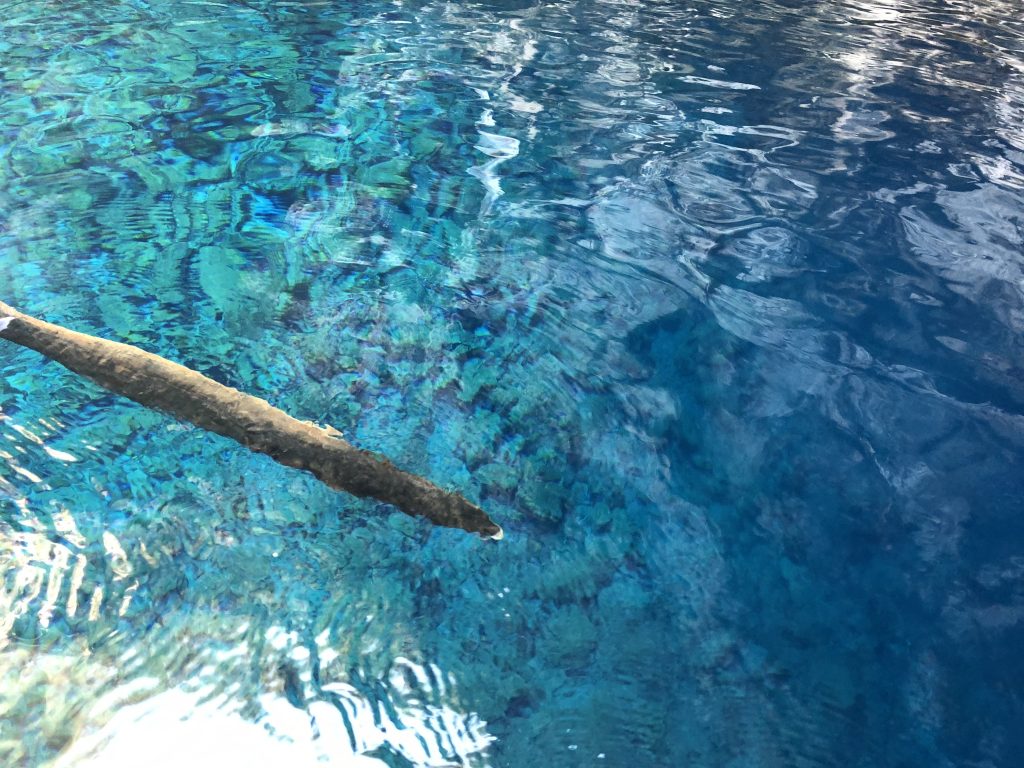 Athena, goddess of wisdom and warfare enjoys bathing at the Fountain of the Horse on Helicon where she was seen by a mortal man. Athena punishes him by taking his sight away.

O Argos, drink ye from the fountains and not from the river; today, ye handmaidens carry your pitches to Physadeia, for Amymone, daughter of Danaus. For, mingling his waters with gold and with flowers, Inakhos will come from his pastoral hills, bringing fair water for the Bath of Athena.
Yet even her did many tears await in the after days, albeit she was a comrade pleasing to the heart of Athena. One day those twain undid the buckles of their robes beside the fair-flowing Fountain of the Horse on Helicon and bathed; and noontide quiet held all the hill. Those two ere bathing and it was the noontide hour and a great quiet held that hill. Only Teiresias, on whose cheek the down was just darkening, still ranged with his hounds the holy place. And, athirst beyond telling, he came unto the flowing fountain, wretched man! And unwillingly saw that which is not lawful to be seen. And Athena was angered, yet said to him: “What god, O son of Everes, led thee on this grievous way? Hence shalt thou never more take back thine eyes!”

Adapted from Callimachus’ Hymn V On the Bath of Pallas

Odysseus arrives on Scheria to the palace of the Phaeacians after being released by Kalypsō. He acknowledges that Kalypsō took good take care of him but he didn’t have someone to wait upon him.

He was very glad of a warm bath, for he had had no one to wait upon him ever since he left the house of fair-haired Kalypsō, who as long as he remained with her had taken as good care of him as though he had been a god. When the servants had done washing and anointing him with oil, [455] and had given him a clean cloak and khiton, he left the bathing-room and joined the guests who were sitting over their wine.
Odyssey 8.450–457, Sourcebook 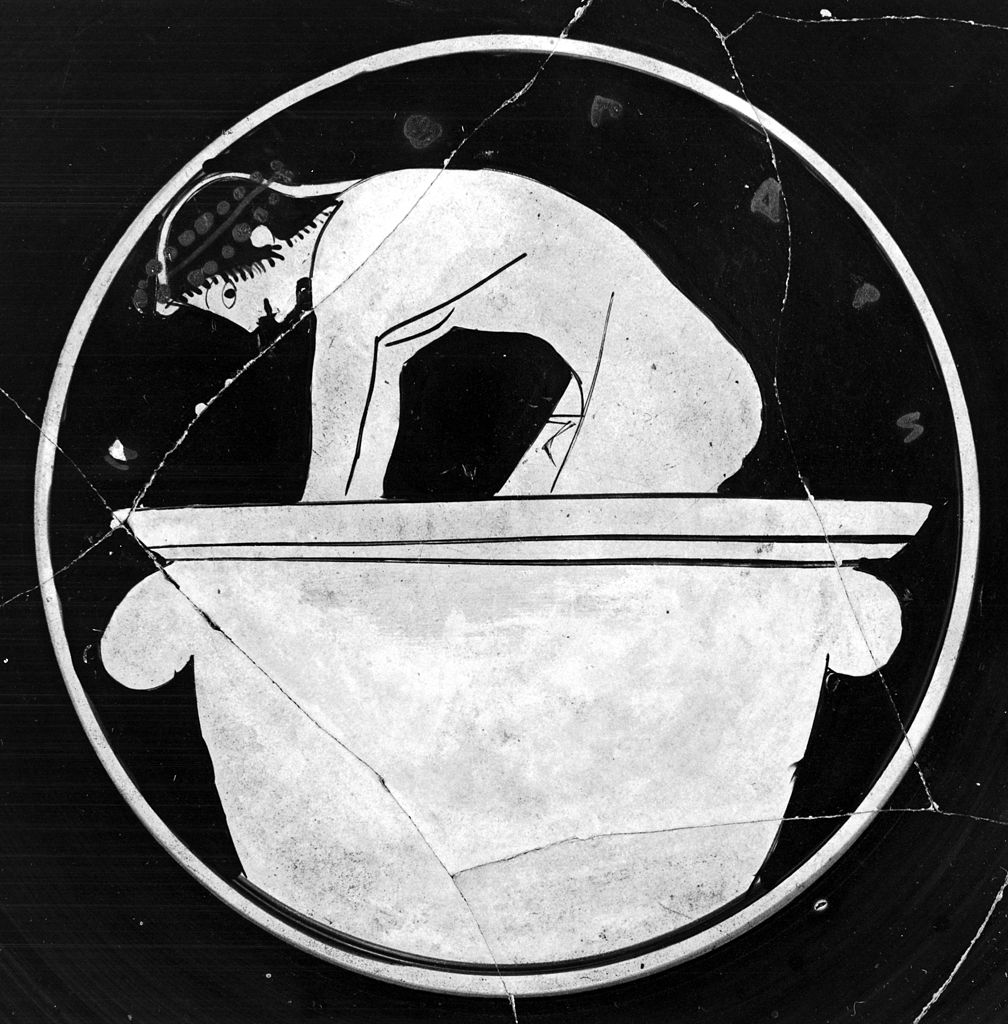 Thetis washes baby Achilles, not to clean him but to make him invincible, as Statius mentions in the Achilleid

Long time has Thetis been scanning every corner with silent glance: then, impatient of delay, she cries: “Tell me, Chiron, where is my darling? Why spends the boy any time apart from thee? Is it not with reason that my sleep is troubled, and terrible portents from the gods and fearful panics – would they were false! – afflict his mother’s heart? For now I behold swords that threaten to pierce my womb, now my arms are bruised with lamentation, now savage beasts assail my breasts; often – ah, horror! – I seem to take my son down to the void of Tartarus, and dip him a second time in the springs of Styx. The Carpathian seer bids me banish these terrors by the ordinance of a magic rite, and purify the lad in secret waters beyond the bound of heaven’s vault, where is the farthest shore of Ocean and father Pontus is warmed by the ingliding stars. There awful sacrifices and gifts to gods unknown – but ‘tis long to recount all, and I am forbidden; give him to me rather.
Achillleid, Book 1, 126–141 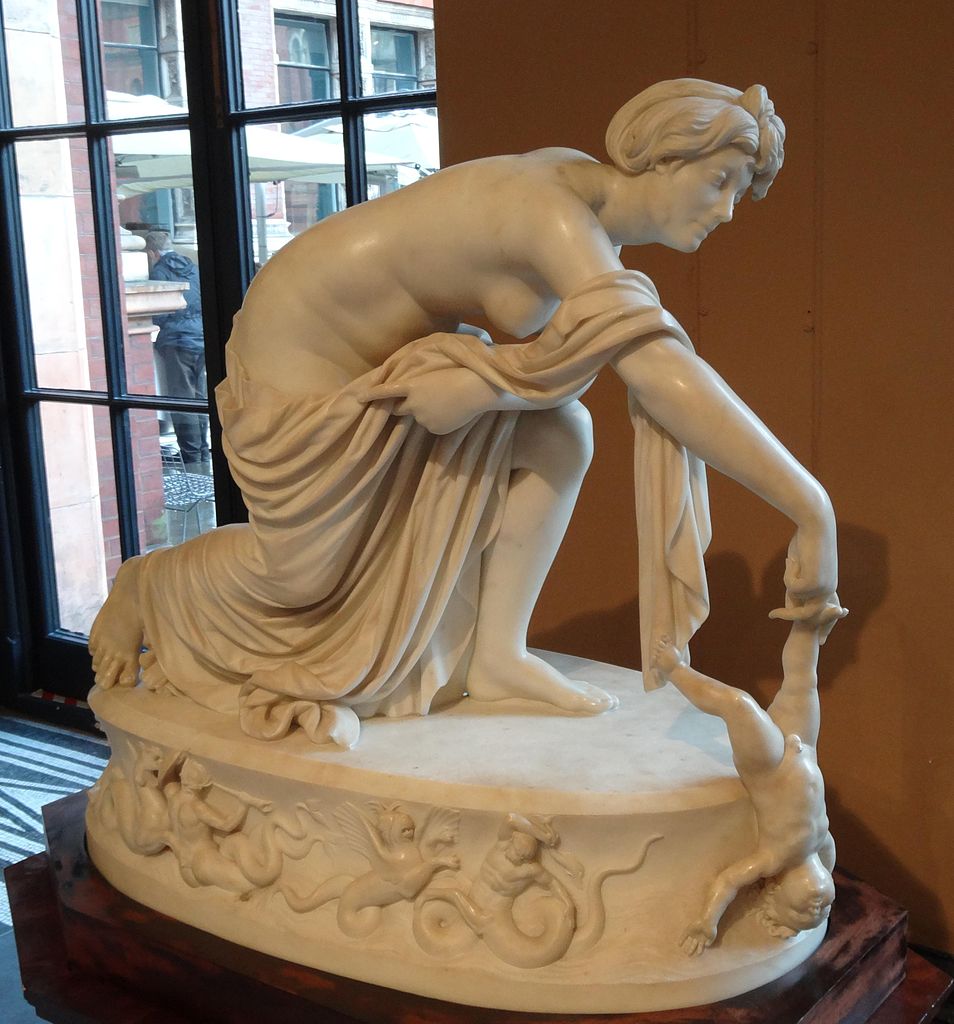 When Telemachus visits Nestor, since he is an important guest, Telemachus is given a bath by the daughter of Nestor.

Meanwhile lovely Polykaste, [465] Nestor’s youngest daughter, washed Telemachus. When she had washed him and anointed him with oil, she brought him a fair mantle and khiton. [468] He emerged from the bathtub [asaminthos], looking like [homoios] the immortals in size, and took his seat by the side of Nestor.
Odyssey 3.465–468, Sourcebook

Not full bathing but washing the hands is a more common scene at the time of departure of guests, who wash their hands before praying. In Iliad 9, Nestor advises the company who will be departing from Agamemnon’s tent to go Achilles, otherwise known as the famous Embassy scene.

Now bring water for our hands, and bid all keep silence while we pray to Zeus the son of Kronos, if so be that he may have mercy upon us. Thus did he speak, and his saying pleased them well. Men-servants poured water over [175] the hands of the guests
Iliad 9.172–175, Sourcebook

In another example, Athena in the guise of Mentor says she would be leaving Nestor’s feast.

“…[335] People should go away early and not keep late hours at a religious festival.” Thus spoke the daughter of Zeus, and they obeyed her saying. Men servants poured water over the hands of the guests, while pages filled the mixing-bowls with wine and water, [340] and handed it round after giving every man his drink-offering; then they threw the tongues of the victims into the fire, and stood up to make their drink-offerings.
Odyssey 3.335–342, Sourcebook

Men servants pouring the water appears in both passages. This being formulaic might be a topic of further discussion.

Bathing was used as a healing tool in all Asklepieia. In the publication titled “History of Hygiene Focusing on the Crucial Role of Water in the Hellenic Asclepieia (i.e., Ancient Hospitals)” publication on MDPI by Andreas N. Angelakis, Georgios P. Antoniou, Christos Yapijakis and George Tchobanoglous, the presence of water was crucial.

In all Asclepieia the role of water and cleanliness was crucial and there was no Asclepieion without a source of water.

Ancient Greeks were no strangers to the healing powers of water. The hot springs of Aedepsus were visited by many.

The natural warm springs (θερμὰ or Ἡράκλεια λουτρά) were not only esteemed as sacred to Heracles, but also considered highly medicinal. The hot springs of Aedipsos in Euboea were famed for their healing properties, as also was a cold spring which flowed for a time. In later times it became a great resort for pleasure as well as health, especially in the spring.
Harpers Dictionary of Classical Antiquities

Aedipsos was best known in antiquity for its health-giving thermal springs, which still flow today. Although legend connected these springs with Herakles, the earliest reference to them in literature belongs to the 4th c. B.C.. Yet it was not until the late Hellenistic period or early Roman Imperial times that the site came to be widely known as a health resort. Sulla, seeking relief from gout, is said to have spent a holiday there. By the 2d c. A.D. it had become an elegant spa frequented by artists, statesmen, and the idle rich—some in search of a quick cure, but many apparently interested only in a good time.
The Princeton encyclopedia of classical sites 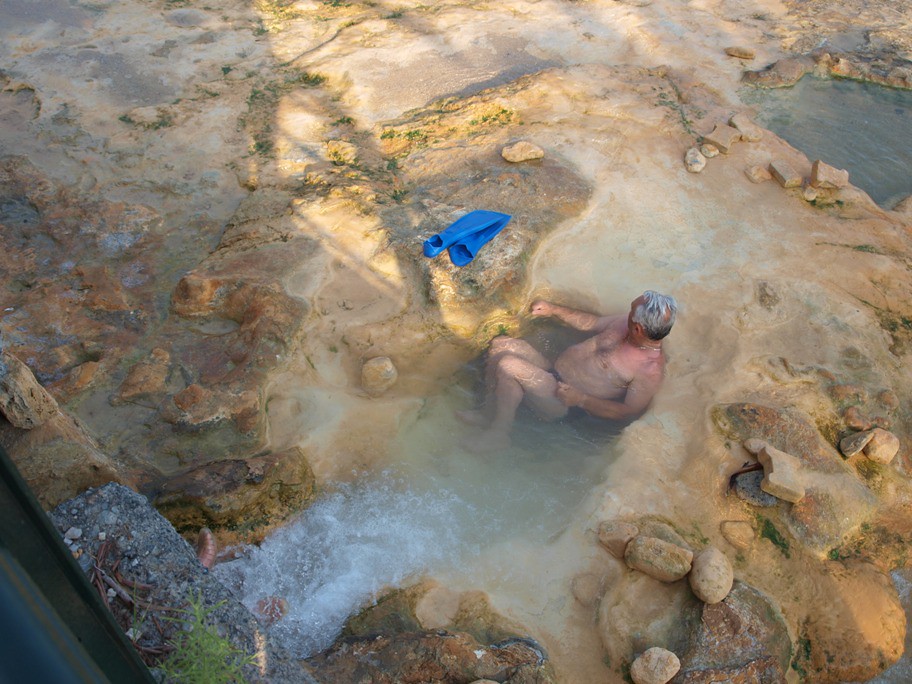 Located about two and a half hours from Athens on the island of Evia, Aedipsos is one of the most famous spa towns in Greece. The town has approximately eighty thermal springs.Popular since ancient times, the temperature of Aedipsos’ thermal waters ranges between 28° — 80C (82 — 176 F). The waters there contains high percentages of magnesium, calcium and iron. It is thought that these elements promote healing.
Greek Reporter

Although thermal water is good for health, Hippocrates says it is not good to drink hot water.

And I wish to give an account of the other kinds of waters, namely, of such as are wholesome and such as are unwholesome, and what bad and what good effects may be derived from water; for water contributes much towards health.

Thermal waters, such as those having iron, copper, silver, gold, sulphur, alum, bitumen, or nitre (soda) in them; for all these are formed by the force of heat. Good waters cannot proceed from such a soil, but those that are hard and of a heating nature, difficult to pass by urine, and of difficult evacuation by the bowels. The best are those which flow from elevated grounds, and hills of earth; these are sweet, clear, and can bear a little wine; they are hot in summer and cold in winter, for such necessarily must be the waters from deep wells.”
Adapted from The Genuine Works of Hippocrates. Part 7.

Even though cleanliness was important for the Athenians but using hot water for it was not favored.

At Athens the frequent use of the public baths was regarded by strict moralists in the time of Socrates and Demosthenes as a mark of luxury and effeminacy: thus it is a sign of demoralization on the part of a ship’s crew. Accordingly Phocion was said to have never bathed in a public bath, and Socrates to have made use of it very seldom. It was, however, only the warm baths to which objection was made, and which in ancient times were not allowed to be built within the city for the Greeks did not at all approve of people being dirty but cleanliness, they thought, should be attained by cold water.
Adapted from A Dictionary of Greek and Roman Antiquities: Greek Baths.

What other examples of washing scenes come to your mind? Please join me in the Forums for further discussion.

Special thanks to Jack Vaughan for his guidance and generosity. Our conversations were instrumental in shaping this post.

Aedipsos, by Agnee, Creative Commons BY-2.0