The architect should be equipped with knowledge of many branches of study and varied kinds of learning, for it is by his judgement that all work done by the other arts is put to test. This knowledge is the child of practice and theory.
Vitruvius 1.1.1, translated by Morris Hicky Morgan 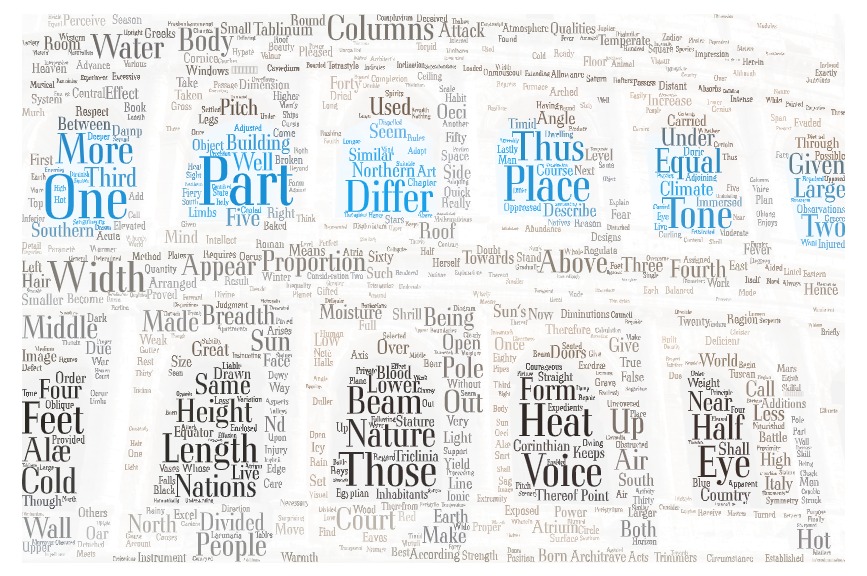 For November’s Book Club we will be reading selections from Vitruvius’ On Architecture.

Vitruvius (Marcus Vitruvius Pollio) was writing in the 1st century BCE. According to Encyclopaedia Britannica:

Little is known of Vitruvius’ life, except what can be gathered from his writings, which are somewhat obscure on the subject. Although he nowhere identifies the emperor to whom his work is dedicated, it is likely that the first Augustus is meant and that the treatise was conceived after 27 BC. Since Vitruvius describes himself as an old man, it may be inferred that he was also active during the time of Julius Caesar. Vitruvius himself tells of a basilica he built at Fanum (now Fano). De architectura was based on his own experience, as well as on theoretical works by famous Greek architects such as Hermogenes. The treatise covers almost every aspect of architecture, but it is limited, since it is based primarily on Greek models, from which Roman architecture was soon decisively to depart in order to serve the new needs of proclaiming a world empire. … Vitruvius’ outlook is essentially Hellenistic. His wish was to preserve the classical tradition in the design of temples and public buildings, and his prefaces to the separate books of his treatise contain many pessimistic remarks about the contemporary architecture. … Vitruvius’ expressed desire that his name be honoured by posterity was realized. Throughout the antique revival of the Renaissance, the classical phase of the Baroque, and in the Neoclassical period, his work was the chief authority on ancient classical architecture.

We will all read chapters 5 (Public Spaces) and 6 (Private Houses). In chapter 5 here are some technical terms relating to acoustics which you might want to skim over! Most of the architecture he discusses is Roman; but 5.7 is on Greek Theatres and 6.7 is on The Greek House.

You can read any translation you like. Here are links to a couple of translations available free online:

Translation by Morris Hicky Morgan (1914)
on archive.org, available to read online or download (includes illustrations and diagrams)
on Perseus (with the Latin alongside but no illustrations)

Translation by Gwilt (1826)
on LacusCurtius

Translation by Frank Granger (1931) on archive.org to read online or download (with the Latin alongside) Volume I only (includes Chapter 5)

To help visualize Roman buildings as they were, there are many reconstructions and diagrams available online in images and videos. Here are a few:

We will start and continue discussion in the Forum, and meet via Zoom on Tuesday November 29 at 11 a.m. EST.

Entry on Vitruvius in Encyclopaedia Britannica