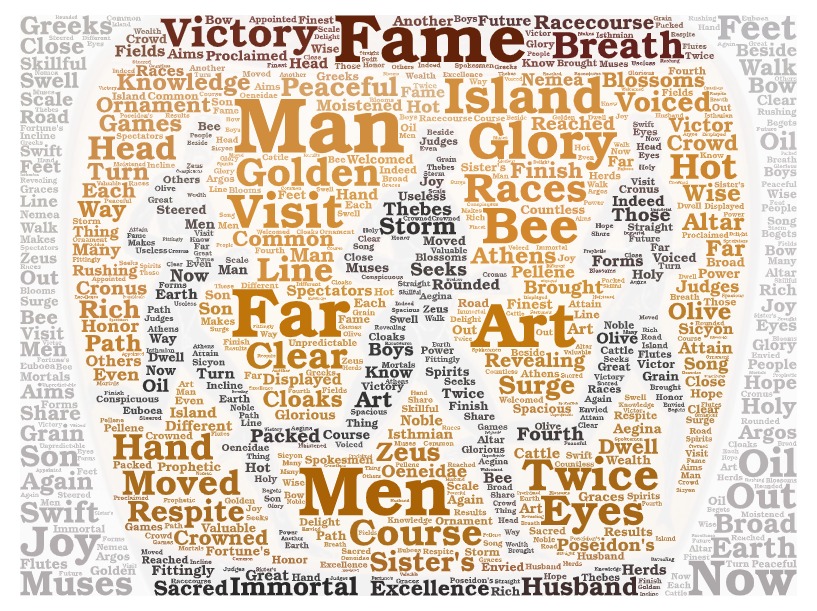 Silence is no ornament for a successful man. With remembrance of fine deeds a man will also sing the gracious recompense made by the honey-voiced Cean nightingale.
Bacchylides Epinician Ode 3, translated by Diane Arnson Svarlien

This month we are reading poems of Bacchylides.

According to the General Introduction to Jebb’s edition, Bacchylides was born in Ioulis (Khora) on the Cycladian island of Ceos (Kea), probably around 512–505 BCE, and was still alive in 428 BCE. His grandfather had been an athlete, and his uncle was the poet Simonides. Bacchylides was one of the last major purely lyric poets, composing at a time when Attic drama was on the ascendant. His earliest poems included commisions for Lampon of Aegina, and victory odes for Hieron of Syracuse, at the same time that Pindar was also composing for them, and there may have been some rivalry, at least on Pindar’s part. There is also evidence that he lived in exile in the Peloponnese.

In the Preface to his edition, Jebb describes him as “a singer who, moving in a lower sphere than Pindar, must also have been more immediately intelligible to the common Hellenic sense … which … could give a quiet pleasure to the average Greek hearer or reader. … his popularity was extensive; and it is know that he continued to be widely read down to the sixth century of our era.”

Many of the odes are fragmentary. The most complete poems are based on a papyrus from Egypt dating to around the 1st century BCE. There are some gaps in the text; in some cases where there are small lacunae scholars have made educated guesses based on sense and meter, while in others they might suggest in general what type of sense might be missing.

The poems are divided into Epinicians (victory odes, some of which incorporate mythical stories), and Dithyrambs (choral odes that may incorporate heroic narratives or episodes).

As always, you can read any translation you like; here are links to some editions available for free online:

Translation by E. Poste, to read online or download at archive.org
This edition contains 11 poems only.

Discussion will start and continue in the Forum, and we will meet via Zoom on Tuesday, October 25 at 11:00 EDT.