Change Your Point of View and Change What you See 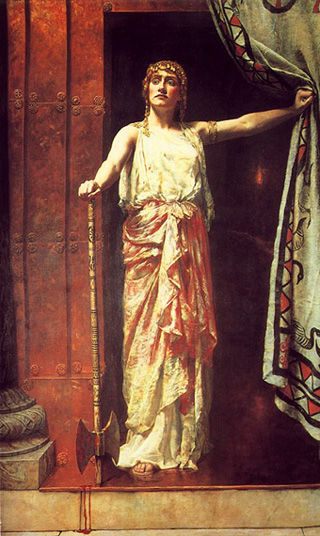 ~ A guest blog by Bill Moulton ~

The play Agamemnon is the hot topic in the community at the moment. If you know Aeschylus’ work you know this is the first play in a trilogy which leads to a showdown between the old goddesses of claw and fang versus the new goddess of the city. The three plays are called the Oresteia and its finale is final confrontation between poisoned earth and lightning; the law of revenge and the rule of law; the ancient goddess below and a new goddess from Olympus. Having read the Agamemnon before and knowing where the trilogy takes us, I chose to change my perspective this time.

First of all, I concentrated on the Erinyes instead of poor Agamemnon. If you don’t know the story: Agamemnon returns victoriously from Troy to his haunted home. His wife Clytemnestra literally rolls out the red carpet, wraps him in a voluminous bathrobe, shoves him into the tub and stabs him to death.  But all along the way I watched for the Erinyes. They are the ancient goddesses of revenge and justice born from the divine ichor (blood) when a son castrated his father. Trying to discern the Erinyes’ story rather than that of poor Agamemnon, I came away with a different view of the play.

Now I am thinking Agamemnon himself really didn’t have anything to do with the play. Clytemnestra’s husband just happened to be a member of such a twisted dysfunctional family that the Erinyes moved in permanently. The family, the House of Atreus, was just a perfect example of the sort of work the Erinyes had to do and the endless cycle of revenge that ensued. The last play in the Oresteia series, The Eumenides, will help end the endless cycle of violence.

One benefit of not concentrating on Agamemnon, the-victim-sacrificed-to-the-Erinyes, during this reading was that I was free to concentrate on all the other victims whom the Erinyes actively avenged:

I then read the play once more, this time concentrating on all the victims, not just the ones over which the Erinyes hovered. In my mind, the Erinyes are most famous as the avengers of matricides, patricides and maintaining order, but, in Agamemnon, we see them involved with punishing adultery, infanticide and the death of a slave. Rather than defending the elder against the younger—as Iris warns Poseidon they will if he takes on Zeus (Iliad XV. 200) —they are defending the young and powerless.

In preparation for this week’s Book Club discussion I read Agamemnon yet again: this time from Kassandra’s point of view. Just reading her lines and skipping the chorus, Kassandra makes a lot more sense. She is an amazing character with an incredible scene which is more than just a plot device. And I couldn’t help but notice the ironic difference between her and her consort. Agamemnon is clueless the whole time he is on stage. Clytemnestra’s gloating, bragging and delight in describing all the ways she’d heard he died just makes it too obvious that the guy is doomed. Oblivious, he dies. On the other hand Kassandra knows all too well what happened is happening and will happen. Yet knowing all, she too dies. 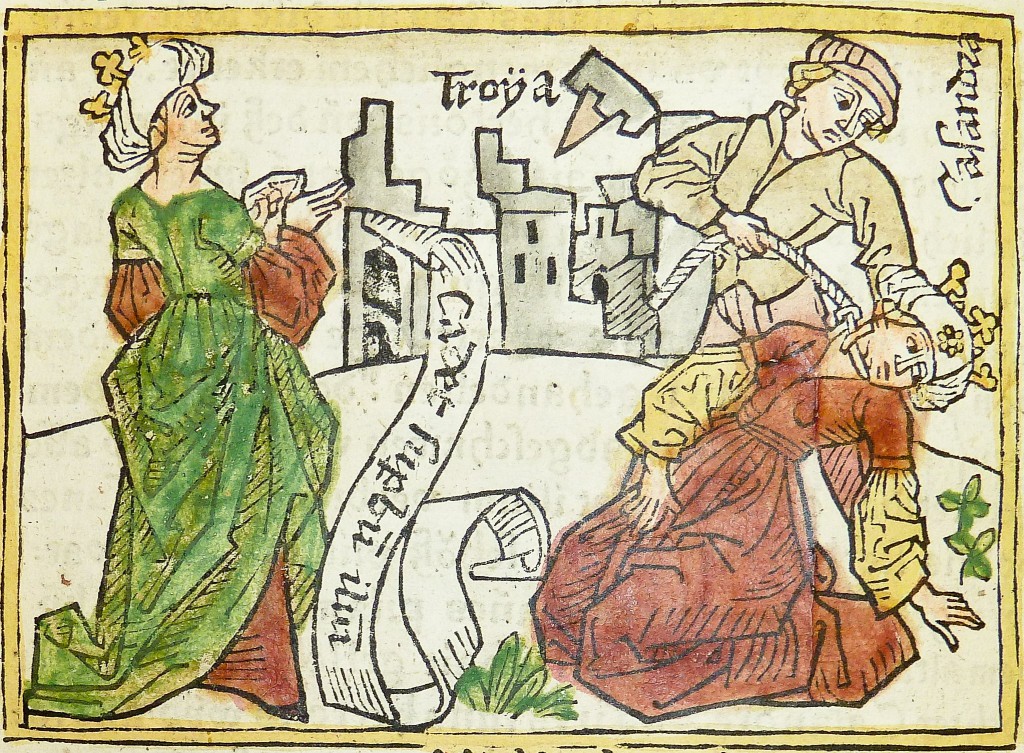 So there it is; I changed my point of view several times lately in re-reading the Agamemnon. Each time brought something new into focus and made the re-read really interesting. That’s how I do it. A friend at Bible-study changes her perspective on the text by concentrating the verbs. Whatever analytical method works best for you, I encourage you to use it, because it will make the reading more fun and more insightful.

HTML text of Agamemnon is available at the Center for Hellenic Studies.

If you are a member you can continue the discussion in the Forums.

And look out for the next live discussion hangout.

Woodcut illustration of Cassandra’s prophecy of the fall of Troy, and her death: Penn Provenance Project, Wikimedia Commons CC BY-2.0