We were pleased to welcome Joel Christensen of Brandeis University, Department of Classics for an Online Open House discussion about Disability in Homer. It took place on Thursday, April 19, at 11:00 a.m. EDT, and was recorded. In preparation, you might like to read these focus passages (PDF handout): 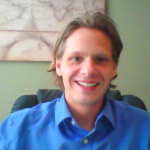 Joel Christensen is Associate Professor in the Department of Classical Studies. He taught previously at the University of Texas at San Antonio (2007–2016). He received his BA and MA from Brandeis (’01) in Classics and English and his PhD in Classics from New York University (2007) where he also received an Advanced Certificate in Poetics and Theory.

Professor Christensen has been a Fellow at the Center for Hellenic Studies (2013) and has received the Society for Classical Studies’ Award for Excellence in Teaching at the Collegiate Level (2013). In addition to articles on language, myth and literature in the Homeric epics, he has published a Beginner’s Guide to Homer (One World, 2013) and also a forthcoming Homer’s Thebes (CHS, 2019) with Elton T. E. Barker as well as A Commentary on the Homeric Battle of Frogs and Mice (Bloomsbury, 2018) with Erik Robinson. He is currently completing a book on the Odyssey and Modern Psychology.

Joel lives with his wife, Shahnaaz and their two children, Aalia and Iskander, in Dorchester, MA. He spends his ‘off’ hours posting material to the popular Classics-oriented website www.sententiaeantiquae.com and tweeting about it (@sentantiq).