We were pleased to welcome Anna Stavrakopoulou (Aristotle University of Thessaloniki) for the next CHS Online Open House discussion, in which she looked at the role of puppeteers. The event was streamed live on Thursday, October 5, at 11 a.m. EDT, and was recorded. 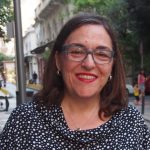 Anna Stavrakopoulou studied philology at the University of Crete, and theatre at Université Paris III-Sorbonne Nouvelle (DEA, Institut d’Etudes Théâtrales) and at Harvard University (PhD, 1994). She taught at New York University, at the University of Bosporus in Istanbul (where she initiated courses on ancient and modern Greek, with the support of the Onassis Foundation) and at Harvard University (1996–1999). She served as Deputy Executive Director of the Onassis Foundation (USA) (1999–2001), and taught as a visiting professor at Yale and the University of Crete (2001–2002). She has been teaching history and theory of theatre at the School of Drama at Aristotle University of Thessaloniki since 2003. Furthermore, she is a founding member and part of the faculty team of Harvard Summer Program in Greece (which has been in operation from 2002 to the present) and Associate Director of the Harvard Center for Hellenic Studies-Greece (based in Nafplio). She has received grants from the Greek State Scholarships Foundation, Ilex Foundation and Bogliasco Foundation. She has served as the Vice-Chair of the Board of Directors at the National Theatre of Northern Greece (2011–2013).

Among other publications, she has co-edited, with Gregory Nagy, the volume Modern Greek Literature: Critical Essays (Routledge, New York 2003), and recently she published an annotated translation, with an extensive introduction of Alexandrovodas the Unscrupulous (1785) by G. N. Soutsos (The Isis Press, Istanbul 2012), for which she received an Honorable Mention by the 2013 MGSA Constantinides Memorial Translation Prize committee. Furthermore, she is the co-editor, with Andreas Dimitriadis and Ioulia Pipinia, of Skiniki praxi sto metapolemiko theatro: syneheies kai rixeis [Performance in post WWII theatre: continuities and discontinuities] (Aristotle University Press, Thessaloniki 2014), as well as of a special issue of the journal Gramma (Vol. 22, Νο. 2, 2014) on “The Geographies of Contemporary Greek Theatre: About Utopias, Dystopias and Heterotopias” with Savvas Patsalidis.

Her research interests have revolved around contemporary Greek literature, comedy (popular and erudite), as well as theatrical translation. She is currently working on the ideological reception of Ibsen in Greece.