We were pleased to welcome Armand D’Angour, Associate Professor of Classics at Oxford and Fellow and Tutor at Jesus College, Oxford, for a discussion about Socrates and Aspasia of Miletus, which is the subject of his forthcoming book. The event took place on Thursday, February 14 2019 at 11 a.m. EST, and was recorded.

Focus passages for this discussion are available in this PDF handout:

and reference will be made to the following primary sources: 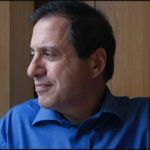 Armand D’Angour is an Associate Professor of Classics at Oxford and Fellow and Tutor at Jesus College, Oxford. Author of The Greeks and the New (2011), an investigation into ancient Greek attitudes to novelty, he has written widely about Greek and Latin poetry, music and literature, and was commissioned to compose odes in ancient Greek for the Olympic Games in Athens (2004) and London (2012). Trained as a pianist and cellist as well as a classicist, he has recently reconstructed ancient Greek music from original documents on stone and papyrus. His book Socrates in Love: The Making of a Philosopher will be published by Bloomsbury in March 2019.