We were pleased to welcome back Keith Stone, CHS Fellow, as guest for a discussion about the textual development of the biblical book of Deuteronomy. This took place on Thursday, October 18th, at 11 a.m. EDT, and was recorded.

In most understandings of the textual development of the biblical book of Deuteronomy, the Song of Moses (32:1–43) is considered to be a late addition, tacked on as if by chance at the end of the book. However, several of the poem’s distinctive themes and locutions are strikingly and organically reflected among what are usually considered to be the earliest parts of Deuteronomy. An analysis of these reflections (which also count among the relatively unique features of the book of Deuteronomy) supports the hypothesis that, even if the text of the Song was formally added to Deuteronomy only at a late time, the book as a whole was influenced by the Song from the beginnings of its development. This is a preview of a talk to be given at the Society of Biblical Literature Annual Meeting in November 2018. 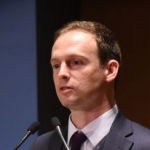 Keith Stone is a CHS Fellow in Instructional Design, Comparative Study of Ancient Texts, and Research Publications, in which capacity he is the primary editor of Classical Inquiries as well as the Head Teaching Fellow of the Harvard College course Culture and Belief 22—The Ancient Greek Hero: Mythology and Facing Death. He earned his PhD from Harvard University in 2013 with a dissertation titled “Singing Moses’s Song: A Performance-Critical Analysis of Deuteronomy’s Song of Moses,” which was published under the same title in 2016 by the Ilex Foundation. Within ancient Israelite literature, religion, and history, his research focuses on the dynamics of performing in traditional settings, particularly within traditions linked to founders. Among his secondary interests are Northwest Semitic languages and inscriptions, land ideology, and ancient Greek myth and hero cult.