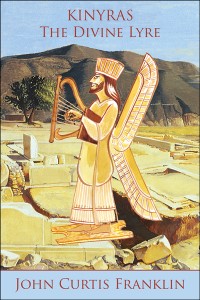 We were pleased to welcome John C. Franklin who joined us for an Open House discussion on “Kinyras: The Divine Lyre” on Thursday, September 15 2016. Kinyras was a mythical priest-king of pre-Greek Cyprus, and John C. Franklin’s research draws on Greco-Roman material and Near Eastern evidence for the divinization of temple lyres, and seeks to illustrate the cultural interactions in the eastern Mediterranean.

Additionally there is a brief graphic novelization of the book illustrated by his wife, Glynnis Fawkes, here.

You can watch the video in the frame below, or on the Youtube site.

John C. Franklin is Associate Professor and Chair of Classics at the University of Vermont. He began life in music composition at the New England Conservatory of Music and MIT Media Lab (1988), and then switched to Classics, earning a PhD at University College London (2002).  Much of his research deals with the cultural—and especially musical interface—between early Greece and the Near East. He has recently completed a book on divinized instruments called Kinyras: The Divine Lyre; another work in progress treats the historical relationship between the Mesopotamian and early Greek lyre traditions (The Middle Muse: Mesopotamian Echoes in Early Greek Music). His compositions now incorporate aspects of ancient musical practice; these include “recomposed” scores for productions of ancient drama (Aeschylus, Libation Bearers, London Festival of Greek Drama 1999 and Aristophanes, Clouds, Edinburgh Fringe 2000); and electronically-realized impressions of ancient music, notably The Cyprosyrian Girl: Hits of the Ancient Hellenes, for which he developed a Virtual Lyre for the Reaktor platform, permitting use of ancient microtonal intonations. He has held research fellowships at the Center for Hellenic Studies, the American Academy in Rome, the American School of Classical Studies at Athens, the Institute for Advanced Study, the Cyprus American Archaeological Research Institute, and the W. F. Albright Institute of Archaeological Research.