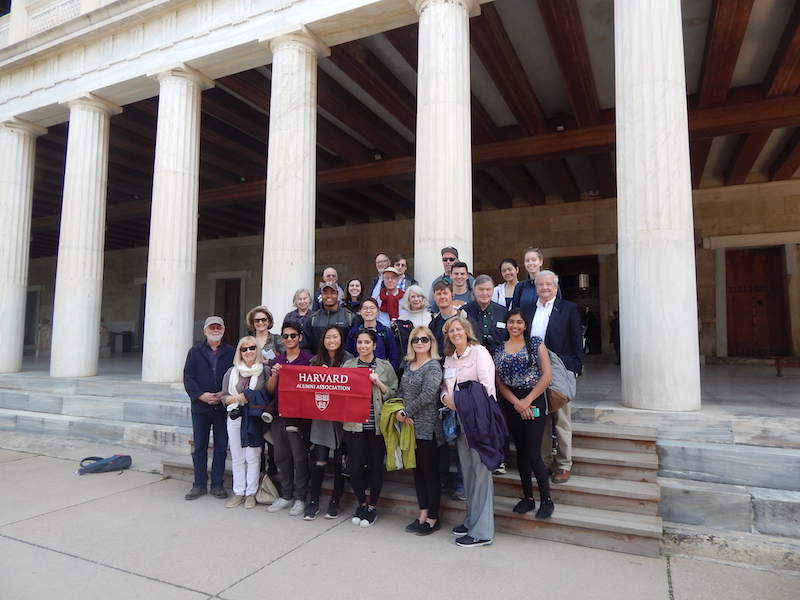 Travel back in time to ancient Greece, starting in the charming seaport town of Nafplio, home to Harvard University’s Center for Hellenic Studies. Then proceed through the Peloponnese to Delphi and Athens, exploring Greece’s famous archaeological sites and museums along the way. Supplement your journey with selected readings from translations of Homer, Pausanias, and even some modern authors.

Space is limited, so register now via the Harvard Alumni Travels website! Special rates apply, so take a look!

Here are the impressions from a former HeroesX participant who joined last year’s trip.

What does it mean to go on the Harvard Alumni Greece Study Trip as an alumnus of Heroes X?

It seems best to me to describe the trip in analogy to my experience of the HeroesX project. A middle-aged businessman/scientist, I undertook HeroesX to supplement my efforts to learn classical Greek. The latter was motivated by a long-term interest in the history of the Greek-speaking Eastern Roman/Byzantine empire. In HeroesX, I thought I would learn a little background about the culture producing the texts that I would read as part of my language studies.

So, as a non-grecophile, non-classicist, non-historian, and at least 30 years removed from any formal study of humanities, I embarked on the MOOC. Soon enough, I was deep into Professor Nagy’s carefully-selected written texts from authors long dead and removed from my experience by more than 100 generations. Read in translation, the individual words were crystal-clear but the thoughts and ideas of the writers were very hard to decipher. The authors’ cultural assumptions served as a secret code which hid the content from me.

And here is where I found the HeroesX approach so effective. As I engaged with the translated Greek texts, then the supplementary readings, lectures and discussion questions, and back to the Greek texts, slowly but surely, I began better to understand the layers of meaning buried in the texts. Connections going back in time to the pre-classical period and forward to the Roman Empire and further to the modern era were unearthed. And so I found with commitment, effort and time, the classical texts began to come alive with meaning; what was hidden became much more apparent and enjoyable.

Receiving an invitation to the Greece Study Trip, I jumped at the opportunity to join Professor Nagy. Never having been to Greece, I found the country in many ways like the classical texts. Disney has not been there yet, to “re-construct” ancient Greece in plastic. Instead, we have thousands and thousands of stones, and rubble, and broken pottery, and corroded weapons and tools and household items. And the natural geography. The makers, mostly anonymous, were also long, long dead. Many of these items are still lying in ruins where they fell, while others were magnificently displayed in the excellent Greek museums, but almost all still hiding most of their rich stories.

And so, just as Greg carefully selected the most-important texts for HeroesX, he selected the most important sites and ruins and artistic treasures for our purposes. Over the course of the trip, we engaged and re-engaged with these locations and objects, skipping far more than we investigated, in order to focus our time on the most valuable. With effort and pertinent instruction from our guides, and discussion and reflection, we uncovered hidden connections in stone, and terracotta, and frescoes just like with the written texts in HeroesX.

I will leave it to others to further extol the praises of our guide, Greg, and the host Marina from CHS-Greece and the food, hotel and other facilities. Greece is indeed a beautiful country, but what makes a trip like this such an intellectual adventure is all the planning and preparation done by others before the trip begins.

How does a trip like this end? Just like HeroesX, the initial exploration was far too short. The discoveries raised more and more questions. I’ll be back to Greece—there was too much we didn’t have time to see. But the insights regarding this extremely rich, explosively important epoch of culture and history remain with me, now a permanent part of how I view the world.