For some time now we have been exploring the key Greek terms from H24H[a] and some of the Greek Core Vocabulary terms that are tracked in HeroesX, and in the Sourcebook[b]. You can find links to these forum discussions from the list at the Core Vocab page. 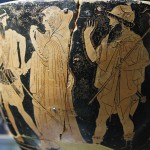 Hieron potter, The taking away of Briseis, side B of a red-figure Attic skyphos, c480BC, Louvre. https://commons.wikimedia.org/wiki/File:Akhilleus_embassy_Louvre_G146_n3.jpg Creative Commons 3.0 license