With the Olympic Games coming up, this month’s Core Vocab word from H24H[1] and tracked in the associated Sourcebook[2] is āthlos (aethlos) [ἆθλος/ἄεθλος] ‘contest, ordeal; competition’; and āthlētēs [ἀθλητής], ‘athlete’ .

In HeroesX Gregory Nagy introduces the word āthlētēs in a section about the Labors of Hēraklēs and the founding of the Olympic Games:

Hēraklēs not only founded this major festival: he also competed in every athletic event on the prototypical occasion of the first Olympics. On that occasion, he won first prize in every Olympic event. This tradition about Hēraklēs is the perfect illustration of a fundamental connection between the labor of a hero and the competition of an athlete at athletic events like the Olympics. As we can see when we read Hour 8b, the hero’s labor and the athlete’s competition are the “same thing,” from the standpoint of ancient Greek concepts of the hero. The Greek word for the hero’s labor and for the athlete’s competition is the same: āthlos. Our English word athlete is a borrowing from the Greek word āthlētēs , which is derived from āthlos
(Gregory Nagy The Ancient Greek Hero in 24 Hours 1§41)

One example of how the concepts of labor and athletic competition come together appears when Achilles is chasing Hector around Troy:

…good was the man that fled, but better far was he that followed after, and swiftly indeed did they run, for the prize was no mere beast for sacrifice or bullock’s hide, [160] as it might be for a common foot-race, but they ran for the life [psūkhē] of Hector. As horses in a chariot race speed round the turning-posts when they are running for some great prize [āthlon]—a tripod or woman—at the games in honor of some dead hero, [165] so did these two run full speed three times round the city of Priam.
(Iliad 22.158–166, Sourcebook) 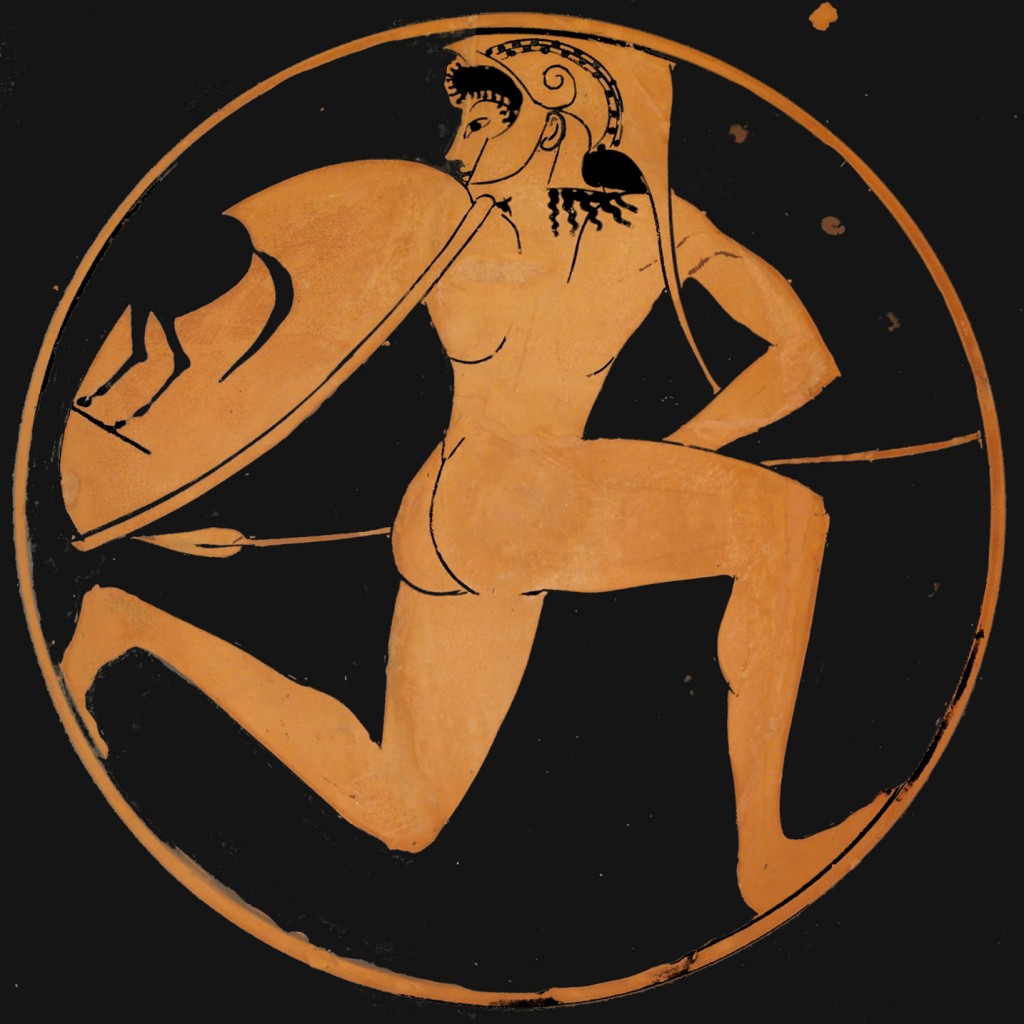 There are various different athletic events described. For example at the funeral games for Patroklos there are seven events: a chariot race, boxing, wrestling (both described as a “painful art”), running, a “trial” in armor, throwing the quoit, archery; and a non-event, javelin-throwing for which Agamemnon receives a prize.

And Odysseus mentions a number of sports when he boasts to the Phaeacians:

Euryalos reviled him outright and said, “I gather, then, that you are unskilled [160] in any of the many sports [āthloi] that men generally delight in. …. There does not seem to be much of the athlete [āthlētēs] about you.” [165] “For shame, sir,” answered resourceful Odysseus, fiercely, “you are an insolent man … Your ill-judged [= without kosmos] remarks have made me exceedingly angry, for I excel [180] in a great many athletic exercises [āthlos]; indeed, so long as I had youth and strength, I was among the first athlete of the age. …”
(Odyssey 8.159–182, Sourcebook)

He goes on to throw a disc “beyond any mark [sēma] that had been made yet.”

I will throw another disc as heavy or even heavier. If anyone wants to have a bout with me [205] let him come on, for I am exceedingly angry; I will box, wrestle, or run, I do not care what it is, with any man of you all except Laodamas … I am a good hand at every kind of athletic sport [āthlos] known among humankind. [215] I am an excellent archer. In battle I am always the first to bring a man down with my arrow, no matter how many more are taking aim at him alongside of me. Philoctetes was the only man who could shoot better than I could [220] when we Achaeans were before the dēmos of the Trojans. I far excel every one else in the whole world … I can throw a dart farther than any one else can shoot an arrow. [230] Running is the only point in respect of which I am afraid some of the Phaeacians might beat me, for I have been brought down very low at sea; my provisions ran short, and therefore I am still weak. (Odyssey 8.202–234)

The word āthlos can also be used to refer to the prize itself, for example when Antilokhos is taking part in the chariot race and incites his horses:

[410] I tell you, and it shall surely be—Nestor will keep neither of you, but will put both of you to the sword, if we win any the worse a prize [āthlon] through your carelessness, fly after them at your utmost speed…
(Iliad 23.410–414)

Just as today we sometimes measure areas by comparing them to football fields, in Homeric poetry we find an athletic event being used as a measure: 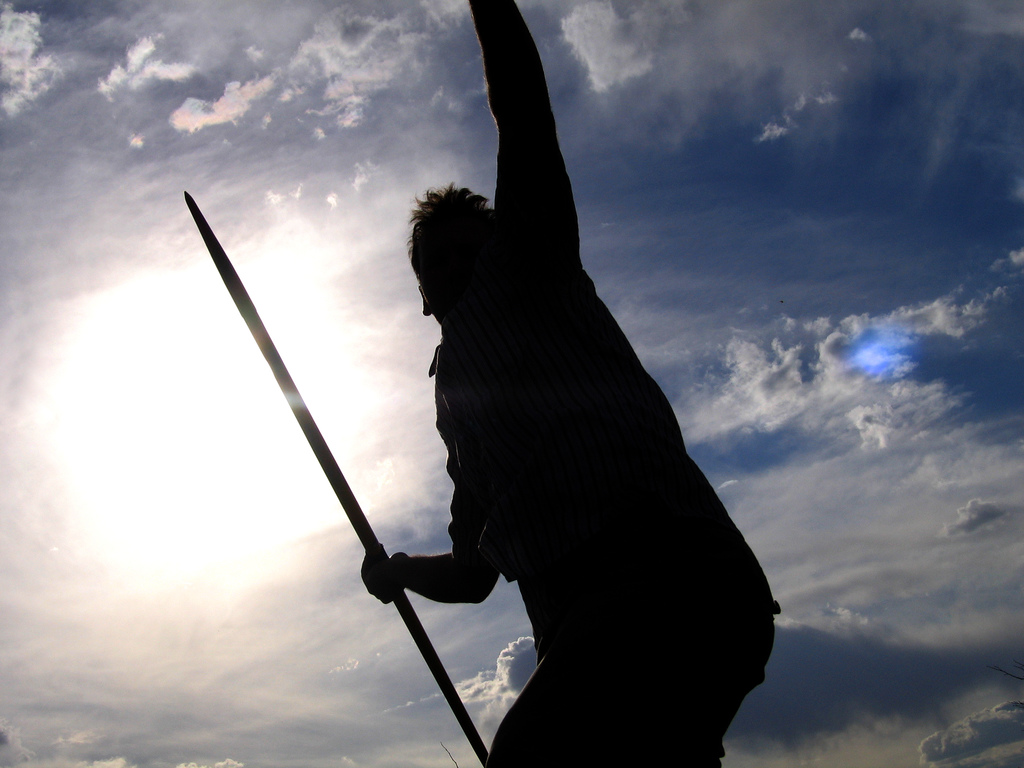 As far as a man can throw a javelin in competition [āthlos] for some prize, or even in battle—[590] so far did the Trojans now retreat before the Achaeans.
(Iliad 16.590–592)

But āthlos can also refer to the struggle and risk of a hero, as in this passage:

10.
[The hero Pelops is asking the god Poseidon for the gift of a chariot- team and declaring to the god his desire to risk death in his quest for the hand of Hippodameia:]
Great risk does not take hold of any cowardly mortal. But if it is destined for humans to die, why should anyone sit around in the darkness and boil away his life to a futile old age without a name, having no share in all the beautiful things of the world? I will undertake this ordeal [āthlos] at hand.
(Pindar Olympian 1.81–85, Sourcebook)

What other struggles, ordeals, sports, competitions, and prizes can you find in the texts, either from the Sourcebook or from other texts? And do you have images to illustrate this word? Join me in the forum to share your findings!