There is a difference between an ekhthros who is a personal enemy, and a polemos or polemoi in the plural, a collective enemy, an opposing force in war.

It seemed appropriate to look at this word initially in the context of this month’s Book Club selection, Sophocles Ajax, in which it appears several times and might be considered one of the key words for this drama. 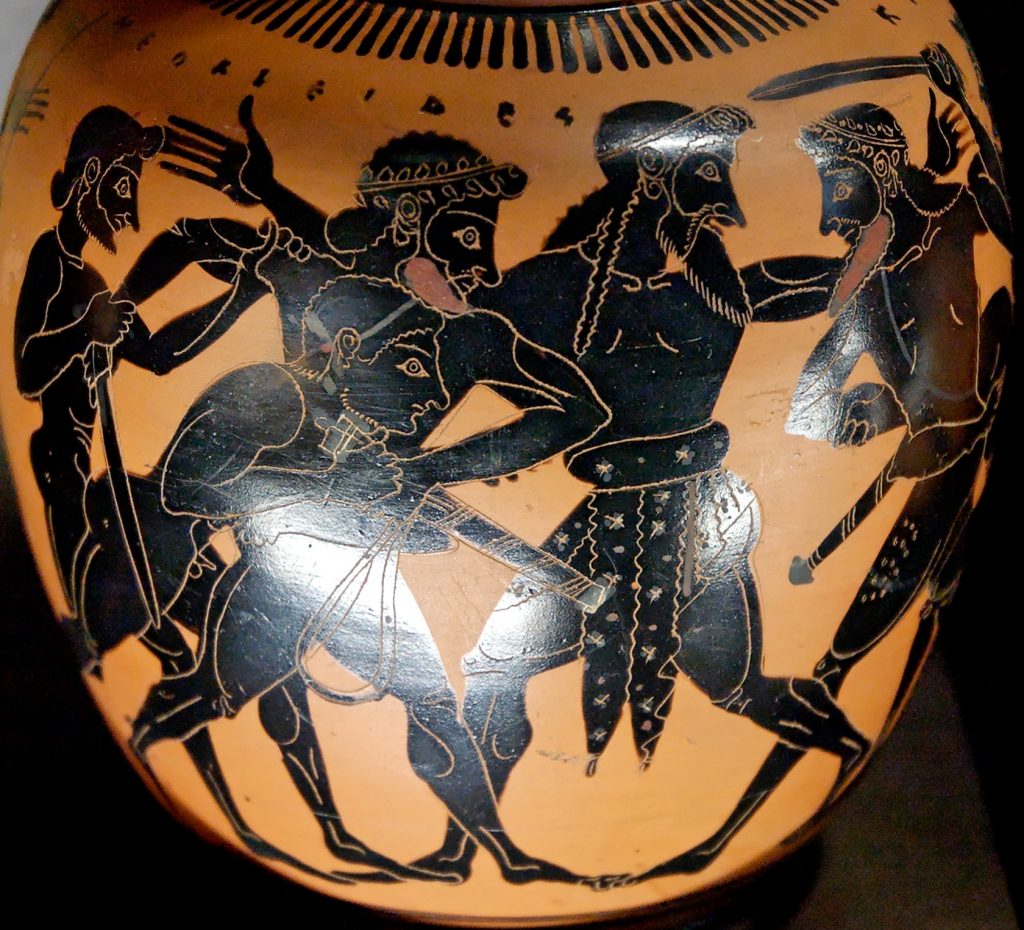 In this exchange between Athena and Odysseus it is clear that he and Ajax have personal enmity:

Athena
What is the danger? Was he not a man before?

Odysseus
Yes, a man hostile [ekhthros] to me in the past, and especially now.

Athena
And is not the sweetest mockery the mockery of enemies [ekthroi]?

Ajax himself makes it clear that he considers Odysseus hateful:

O Zeus, forefather of my forebears, if only I might destroy that deep dissembler, that hateful [ekhthros] sneak, and [390] the two brother-kings, and finally die myself, also!

Odysseus does, however, respect Ajax, as we see in this exchange with Agamemnon, in which the opposite concept, being philos, ‘near-and-dear’, also features:

Agamemnon
[1350] Reverence, I tell you, is not easily practiced by the autocrat [turannos].

Odysseus
But it is easy to grant dispensations [tīmai] to friends [philos, plural] when they advise well.

Agamemnon
A good [esthlos] man should listen to those in charge.

Odysseus
Stop! Your power is victorious when you surrender to your friends [philos, plural].

Agamemnon
Remember to what sort of man you show this kindness [kharis]!

Agamemnon
Why do you do this? Why do you so respect an enemy’s [ekhtros] corpse?

Odysseus
I yield to his excellence [aretē] much more than his hostility [ekhthra].

Agamemnon
Men who act as you do are the unstable sort in humankind.

Odysseus
Quite the majority of men, I assure you, are friendly [philoi] at one time, and bitter at another.

Agamemnon
[1360] So then, are these the type of friends [philoi] that you recommend we make?

The immediate cause of Ajax’s hostility to Odysseus is the dispute over the armor of Achilles. But is there evidence from the play or from other texts that there were other causes for enmity, or they were formerly friends? 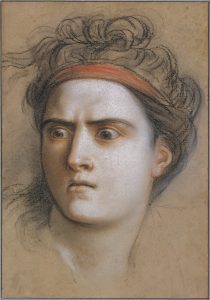 Not surprisingly, Medea, who is angry and upset at her husband Jason’s forthcoming marriage to the king’s daughter, uses the word, as in this speech:

There are ordeals [agōnes] still in store for the couple newly-wed, and no small labors [ponoi] for their relations. Do you think that I would ever have fawned on that man, unless to gain some profit or to form some scheme? |370 No, I would not even have spoken to him or touched him with my hand. But he has progressed so far in folly that, though he might have checked my plot by removing me from the land, he has allowed me to stay this day, in which I will lay low in death three of my enemies [ekhthroi]: |375 a father, his daughter, and my husband too. 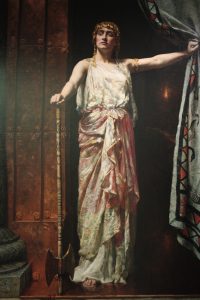 Clytemnestra has long held great antagonism toward Agamemnon because he killed their daughter. As with Medea, her enmity also extends to his new concubine Kassandra, as we can see when she justifies killing them:

Much have I said before to serve my need and I shall feel no shame to contradict it now. For how else could one, devising hate [ekhthra] against enemies [ekhthroi] 1375 who bear the semblance of philoi, fence the snares of ruin too high to be overleaped? This is the agōn of an ancient feud, pondered by me of old, and it has come—however long delayed. I stand where I dealt the blow; my purpose is achieved.
Aeschylus Agamemnon 1372–1379, Sourcebook

Again, as with Medea, she uses the term agōn. Is this a collocation that appears elsewhere? Are there other terms that often appear in close proximity to ekhthros?

Theognis of Megara prays for vengeance on his enemies:

May Zeus grant me repayment of the philoi who love me,
338 and that I may have more power than my personal enemies [ekhthroi].
Thus would I have the reputation of a god among men,
340 if my destined death overtakes me when I have exacted repayment.
O Zeus, Olympian, bring my timely prayer to its ultimate fulfillment!
342 Grant that I have something good happen in place of misfortunes.
But may I die if I find no respite from cares brought on by misfortunes. 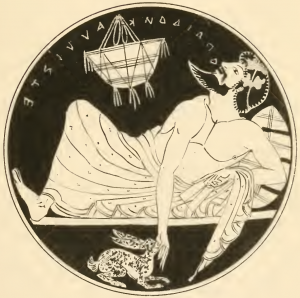 Does vengeance always accompany the recognition of such enmity?

Perhaps not. Here, for example, is Achilles—also referring to Agamemnon—in his reply to Odysseus in the Embassy scene:

Hateful [ekhthros] is that man to me, as hateful as the gates of Hādēs, 313 the man who hides one thing in his thinking and says another thing. 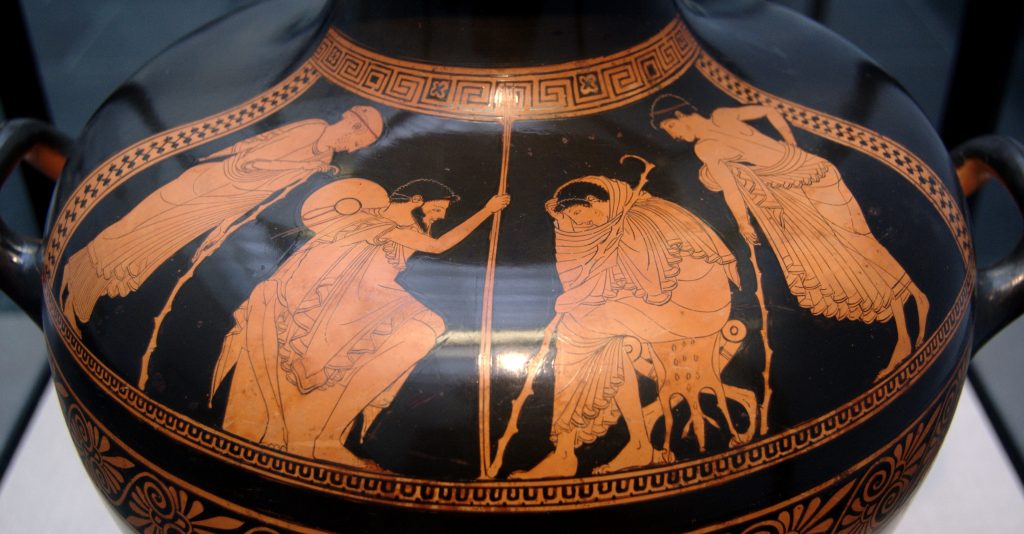 He rejects the offer, and threatens to leave. But he has already withdrawn from the fighting. So is he threatening this as revenge? His personal enmity with Agamemnon did not go as far as killing him, partly as a result of Athena’s intervention in Iliad 1.194–200. What other examples are there where being ekhthroi does not actually lead to killing?

When Sappho invokes the Nereids and prays for her brother’s wellbeing, she says:

1 O Queen Nereids, unharmed [ablabēs] 2 may my brother, please grant it, arrive to me here [tuide], 3 and whatever thing he wants in his heart [thūmos] to happen, 4 let that thing be fulfilled [telesthēn]. [5] And however many mistakes he made in the past, undo them all. 6 Let him become a joy [kharā] to those who are near-and-dear [philoi] to him, 7 and let him be a pain [oniā] to those who are enemies [ekhthroi]. As for us, 8 may we have no enemies, not a single one.

Does this mean that in the song culture people were either philoi or ekhthroi, or were there people who were neither one nor the other? What evidence can you find to help answer this question?

The passages above are just a few examples of where the word is used. In these and other texts, what do people say about those they regard as ekhthroi? Do any particular individuals appear in this context more often than others?

Please join me in the forum to continue the dialogue about this term!

Note: Images have been selected from pictures that are freely available with open source or Creative Commons licenses or from photographs sent in by community members for the purpose. The images in this post are intended to suggest the subject, rather than illustrate exactly—as such, they may be from other periods, subjects, or cultures. Attributions are based where possible by those shown by museums, or on Wikimedia Commons, at the time of publication on this website. Images and texts accessed May 2018.