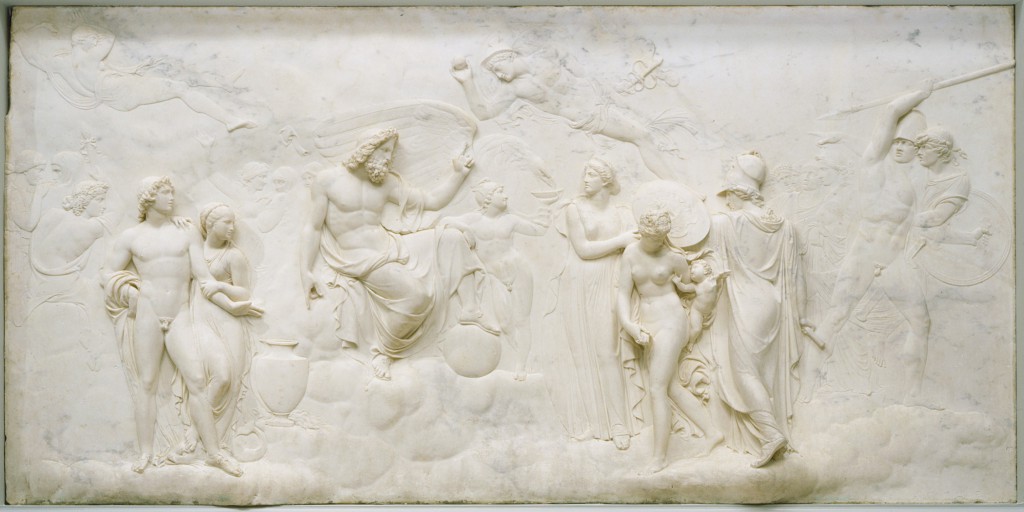 Inspired by Joel Christensen’s CHS Open House on ‘Eris and Epos: Composition, Competition and the ‘Domestication’ of Strife’ which concentrated on Homeric and Hesiodic examples (passages which are available through the linked post), I thought it might be interesting to look at other texts and to compare uses of the word eris for this month’s Core Vocab discussion. The definition from Professor Nagy is ‘strife, conflict’[1].

The word appears in the Agamemnon of Aeschylus when the Chorus discusses Helen as the cause of the Trojan War:

Who can have given a name so altogether true—was it some power invisible guiding his tongue aright by forecasting of destiny?— 685 who named that bride of the spear and source of strife with the name of Helen? For, true to her name, a Hell she proved to ships, Hell to men, Hell to city, 690 when stepping forth from her luxuriant [habros] and costly-curtained bower, she sailed the sea before the breath of earth-born Zephyros. And after her a goodly host of warrior 695 huntsmen followed on the oars’ vanished track in pursuit of a quarry that had beached its boat on Simoeis’ leafy banks—in a conflict [eris] to end in blood.
(Aeschylus Agaememnon 681–698, Sourcebook[2])

Euripides also associates Helen with such strife, for example in part of her speech where she explains how she was to be taken away by Paris:

But Hera, the holy beloved of Zeus on her golden throne, sent the swift-footed son of Maia. I was gathering fresh rose leaves in the folds of my robe, [245] so that I might go to the goddess of the Bronze House; he carried me off through the air to this luckless land, and made me an object of miserable strife, of strife between Hellas and the sons of Priam. And my name [250] beside the streams of Simois bears a false rumor.
(Euripides Helen 242–251, translated by E.P. Coleridge, on Perseus) 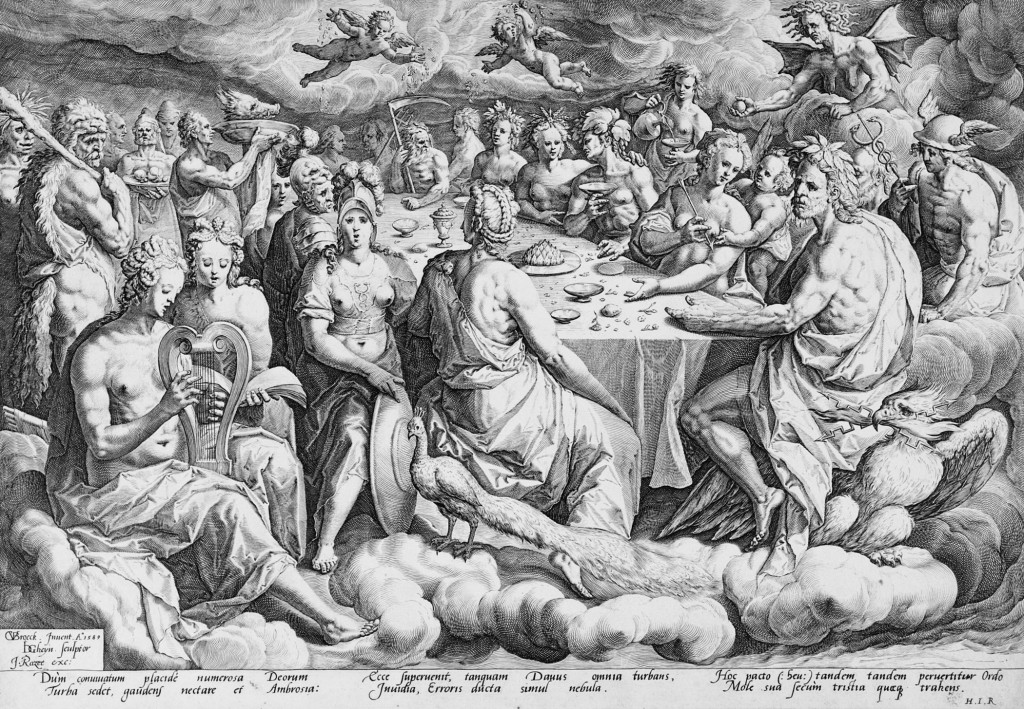 In Libation Bearers the type of strife seems more beneficial when Athena pronounces to the Eumenides:

I rejoice that you are bringing these things to fulfillment for my land with favorable phrenes; 970 I love the eyes of Persuasion, who guided my tongue and mouth against the fierce refusal of these deities. But Zeus of the assembly [agora] has prevailed. 975 Our rivalry [eris] in doing good always wins.
(Aeschylus Agamemnon 968–975, Sourcebook)

In particular this strife has ended with a peaceful settlement brought about by Athena’s mediation and the establishment of the Athenian court.

I was intrigued when Joel Christensen discussed the Hesiod passage (Works and Days 11–26) that suggested there were two types of eris, and the more beneficial one inspires people to work harder. I was thinking about the difference in meaning between the English noun ‘strife’ and the verb ‘strive’. Perhaps that is what is happening when the messenger reports what the Bacchic women have been doing:

714 And we herdsmen and shepherds came together [sun-ēlthomen] 715 so that we could give each other a competition [eris] of words that we had in common, 716 concerning what kinds of terrifying things they do [drân], yes, terrifying and worthy of wonder [thauma].
(Euripides Bacchae 714–716, Sourcebook)

Here is an example from Pindar, where he uses the metaphor of athletics to talk about a contest between poets:

if [80] in honor of your uncle Callicles you bid me to build a monument whiter than Parian stone, know that gold, when it is refined, shows all radiance, and a song in honor of noble deeds makes a man equal in fortune to kings. [85] May that man, who dwells beside the stream of Acheron, hear my voice singing, where in the contest of the loud-roaring wielder of the trident he flourished with crowns of Corinthian wild celery. Euphanes, your aged grandfather, [90] once willingly sang his praises, child. Each man has his own generation; and each man expects to speak best of what he has seen himself. If he were praising Melesias, how he would throw his opponent in the struggle! Weaving his words, impossible to wrestle down in speech; [95] with gentle thoughts towards noble men, but a rough adversary to his opponents.
(Nemean 4, translated by Diane Arnson Svarlien, on Perseus)

Here the contest is in words. Is this a ritualized type of war, as in the first type of strife? Or is it more related to the second type, where the poet is inspired to work hard to do what he does best? How does this ability to speak well fit with the idea of conflict, resolution, and judgment?

To illustrate eris I have chosen scenes where Eris disrupted the wedding of Peleus and Thetis, leading to the Judgment of Paris, the abduction of Helen, and the events of the Trojan Wars; I have also included a statue to Pindar, who so often wrote about the victors of contests.

How would you choose to represent it visually?

Please join me in the forum to explore this word in these and other passages!

Sarah Scott is a technical author who lives in Scotland. She has taken part in all four iterations of HeroesX, being one of the Community TAs in v2–v3, and has a lifelong love of language, literature, and learning.