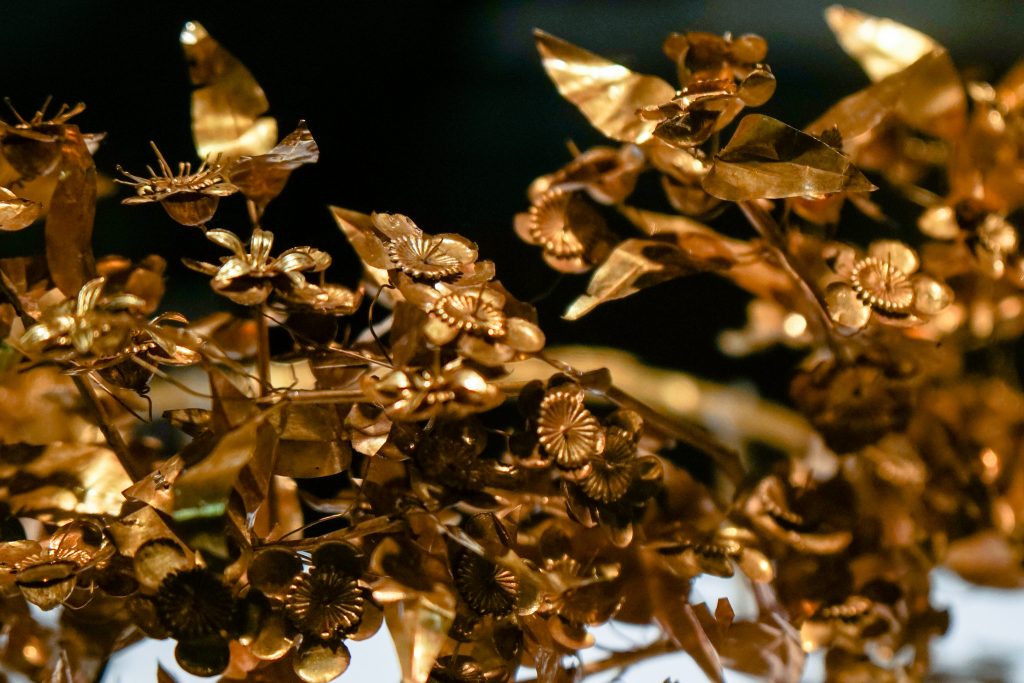 An example of gratitude or thanks is shown by the attitude of the Achaeans after the death of Achilles:

Whatever gold or other possession each of them had brought to Troy or had taken away from the division of spoils [= spoils taken at Troy] was now collected and heaped up on top of the funeral pyre, right then and there. The same thing happened also later when Neoptolemos came to Troy. He [= Achilles] received another round of glorious gifts from his son and from the Achaeans who were trying to show their gratitude [kharis] to him.
Philostratus Hērōikos 51:13, Sourcebook

Another aspect of this word is reciprocity, including gratitude or even compensation, as in these examples. The first, described by the Chorus, is how the lion-cub’s true nature emerged when he grew up:

Without being invited to do so, doing it as a compensation [kharis] to those who fostered him, 730 he prepared a feast [dais], bringing disasters [atai], with sheep being slaughtered. And the house was defiled with blood.
Aeschylus Agamemnon 729–732, Sourcebook

That compensation can therefore be negative as above, or positive as suggested by the Chorus when they advise Oedipus not to set foot in the sacred space at Colonus:

No man is visited by the punishment of fate if he requites deeds which were first experienced [paskhein] by him. 230 Deceit on the one part matches deceits on the other, and gives labor [ponos] instead of reward [kharis].
Sophocles Oedipus at Colonus 229–233, Sourcebook

and Oedipus himself, hinting perhaps at his future role as one of the cult heroes of the sacred space in his own right, prays for a positive compensation for Theseus in exchange for helping restore his captured daughters:

May you have recompense [kharis], Theseus, for your nobleness and for your observance of dikē in caring for me!
Sophocles Oedipus at Colonus 1042–1043, Sourcebook

But it can be double-edged. Athena, in the form of Pandaros persuades him to break the truce: 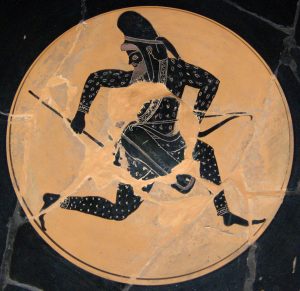 If you dare send an arrow at Menelaos [95] you will win honor and gratitude [kharis] from all the Trojans, and especially from prince Alexandros—he would be the first to requite you very handsomely if he could see warlike Menelaos, son of Atreus mount his funeral pyre, slain by an arrow from your hand.
Iliad 4.94–99, Sourcebook

which he comes to regret:

In one aspect kharis or grace relates to physical appearance, as in this example:

Every one was struck with the appearance of Odysseus, high-spirited son of Laertes, for Athena had given him gracefulness [kharis] about the head and shoulders, [20] making him look taller and stouter than he really was, that he might impress the Phaeacians favorably…
Odyssey 8.17–23, Sourcebook

but perhaps there is more to it than that, as when Odysseus rebukes Euryalos:

…you are an insolent man—so true is it that the gods do not grace [=give graceful gifts karieis, pl.] all men alike in speech, person, and understanding. One man may be of weak presence, [170] but the gods have adorned him with such a good conversation that he charms every one who sees him; his honeyed moderation [aidōs] carries his hearers with him so that he is leader in all assemblies of his fellows, and wherever he goes he is looked up to. Another may be as handsome as a god, [175] but his good looks are not crowned with verbal grace [kharis]. This is your case. No god could make a finer looking man than you are, but you are empty with respect to noos. Your ill-judged [= without kosmos] remarks have made me exceedingly angry…
Odyssey 8.166–179

That image of being crowned connects with another association of the word, as shown in the description of the doomed Euphorbos, explained by Gregory Nagy in Homer the Preclassic[3]:

II§424 A metonymy for this charisma is the blossom of the myrtle, which as we saw is the flower of choice for making stephanoi ‘garlands’ to wear at the festival of the Heraia in Argos. I have deliberately used the word charisma here in view of linguistic evidence for a metonymic link between the word kharis ‘pleasurable beauty’ and the festive use of myrtle blossoms for the making of garlands:

II§425 The image of myrtle blossoms compactly curled around a festive garland is applied as a metaphor for picturing the compact and curly hair of the hero Euphorbos as he lies dead on the battlefield. The curls of this beau mort are compared to myrtle blossoms.
Homer the Preclassic pages 295–296

51 With blood bedewed was his hair, looking like myrtle-blossoms [kharites]), 52 with the curls and all so deftly bound in bands of silver and gold.
Iliad 17.51–52, Sourcebook 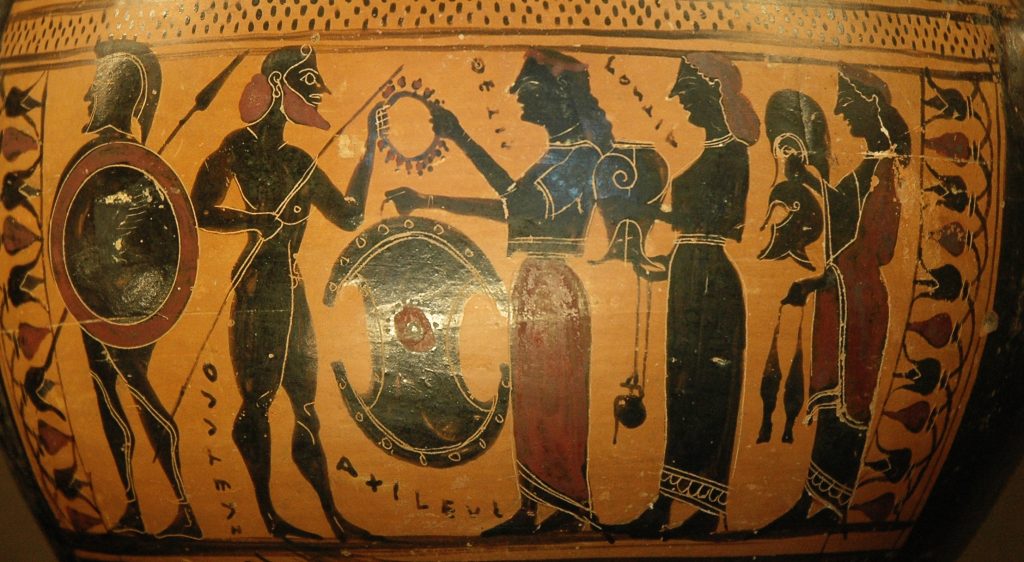 The word has a related verb, which Gregory Nagy explains in his introductory notes to the Homeric Hymn to Dionysus:

In the Homeric Hymns, this salutation khaire (plural khairete) marks a transition from focusing on a god or on an aspect of a god to focusing on the rest of the song. This verb khairein, ‘to take pleasure’, is related to the noun kharis, which is analogous to the Latin noun gratia in combining the ideas of pleasure (‘gratification’) and beauty (‘gracefulness’) by way of reciprocity (‘graciousness’). In Hour 21 (§§49, 63), we have already seen contexts where this word kharis combines the ideas of beauty and pleasure. And such a combination is implied also in the salutation khaire as we see it used in the Homeric Hymns. Accordingly, in the case of khaire at line 58 of this Homeric Hymn to Dionysus, we can interpret this salutation even more precisely as ‘hail and take pleasure in the beauty’.
H24H 24§13

With his salutation of khairete, the aoidos is asking the Delian Maidens to accept the kharis ‘favor’ of his song and to give him their ‘favor’, their kharis, in return. The hymnic salutation khaire / khairete is used in the Homeric Hymns to address the given god / gods presiding over the performance of each given hymn.
Homer the Classic 2§33[4]

Its use in reference to song is also shown when Alkinoos notices Odysseus’ distress at the song about the destruction of Troy: 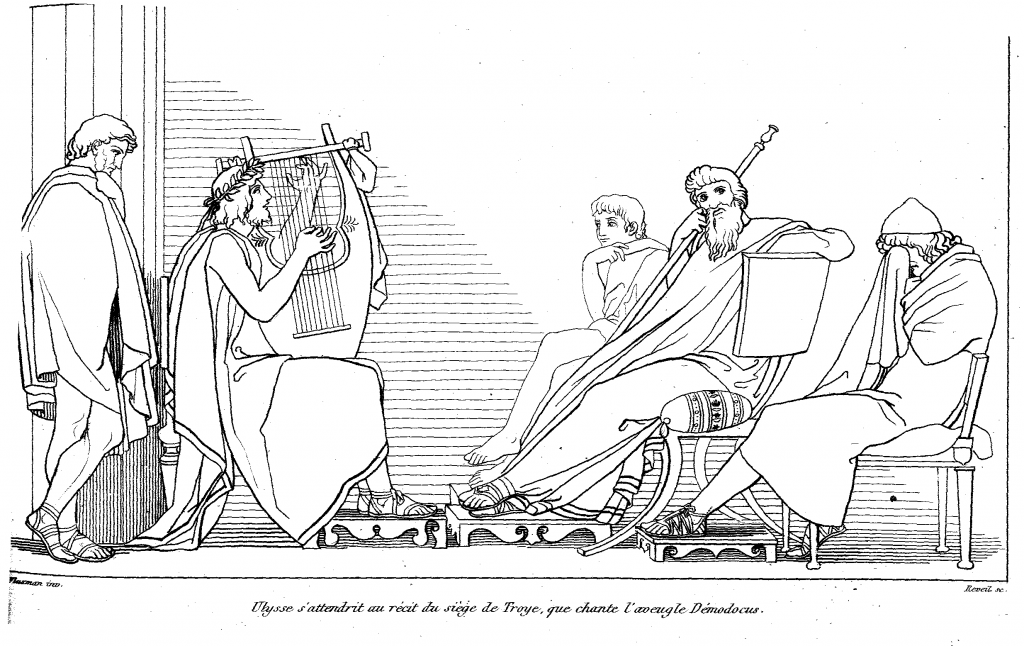 537 It is high time for Demodokos to hold off and stop the song of that lyre of his with its clear sound. 538 I say that because the beauty and the pleasure he gives [kharizestai] as he sings these things does not at all extend to everyone here.
Odyssey 8.537–538, Sourcebook

so the reciprocity of giving and receiving the beauty and pleasure is an important aspect of songmaking.

As so often, we find the concept embodied as a group of goddesses, but we will leave that for the next post….watch out for part 2, The Graces coming soon!

Meanwhile, the quotations above are just a few examples of how the word is used in different contexts. Please share other passages and images in the forum related to the word as an ordinary noun, or to the verb, to help build up a picture of what this complex concept meant to the ancient Greeks.

Flaxman, John: Ulysses listening to the recitation of the siege of Troy, sung by the blind Demodocus, illustration of Odyssey, 1810. public domain, via Wikimedia Commons