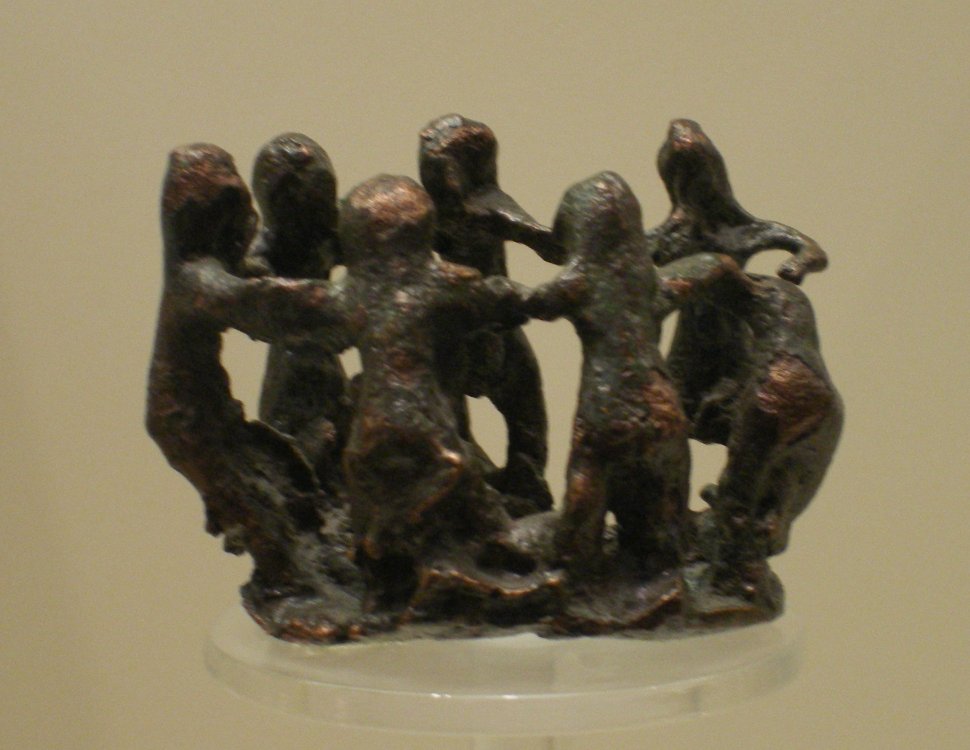 What better way to celebrate the end of another year and the start of the next with a group singing and dancing together! So this month’s Core Vocab word is khoros [χορός] which Professor Nagy defines as “‘chorus’ = ‘group of singers/dancers’”[1]

As usual, I will start with Homeric usage.

[590] The renowned one [= the god Hephaistos], the one with the two strong arms, pattern-wove [poikillein] in it [= the Shield of Achilles] a khoros. 591 It [= the khoros] was just like the one that, once upon a time in far-ruling Knossos, 592 Daedalus made for Ariadne, the one with the beautiful tresses [plokamoi]. Here was a song-and-dance [khoros] of youths and of maidens whom anyone would want to woo for a wife, all with their hands on one another’s wrists. The maidens wore robes of light linen, and the youths wore well woven tunics that were slightly oiled. The girls were crowned with garlands,
[595] while the young men had daggers of gold that hung by silver baldrics; sometimes they would dance deftly in a ring with merry twinkling feet, as it were a potter sitting at his work
[600] and making trial of his wheel to see whether it will run, and sometimes they would go all in line with one another, and many people were gathered joyously about the place of dancing [khoros].
[605] There was a singer also to sing to them and play his lyre, while two master dancers went about performing in the midst of them when the singer started his tune.
(Iliad 18.590–607, Sourcebook[2])

In this dance there are two leaders. We have seen this at work also in Alcman’s Partheneion where Hagesikhora and Agido are leaders and competitors.

In the Iliad passage, both Hephaistos and Daedalus are masters of their craft and are not renowned for singing and dancing; in fact Hephaistos is lame. But he is creating an image of the song-and-dance. But what about Daedalus? Did he sing? Apart from the song and dance itself, there is also a secondary meaning at play here, where khoros can also refer to the “place for dancing” (this meaning is also given in LSJ).  So it seems they created the space which comes alive when the activity itself takes place with the dancers and singers—and, in this example, with instrumentalists as well—whether with actual people or with images of people on the Shield.

This reminds us that it is a specially designated space, and that the activities of the group have a defined role that is beyond the everyday senses. 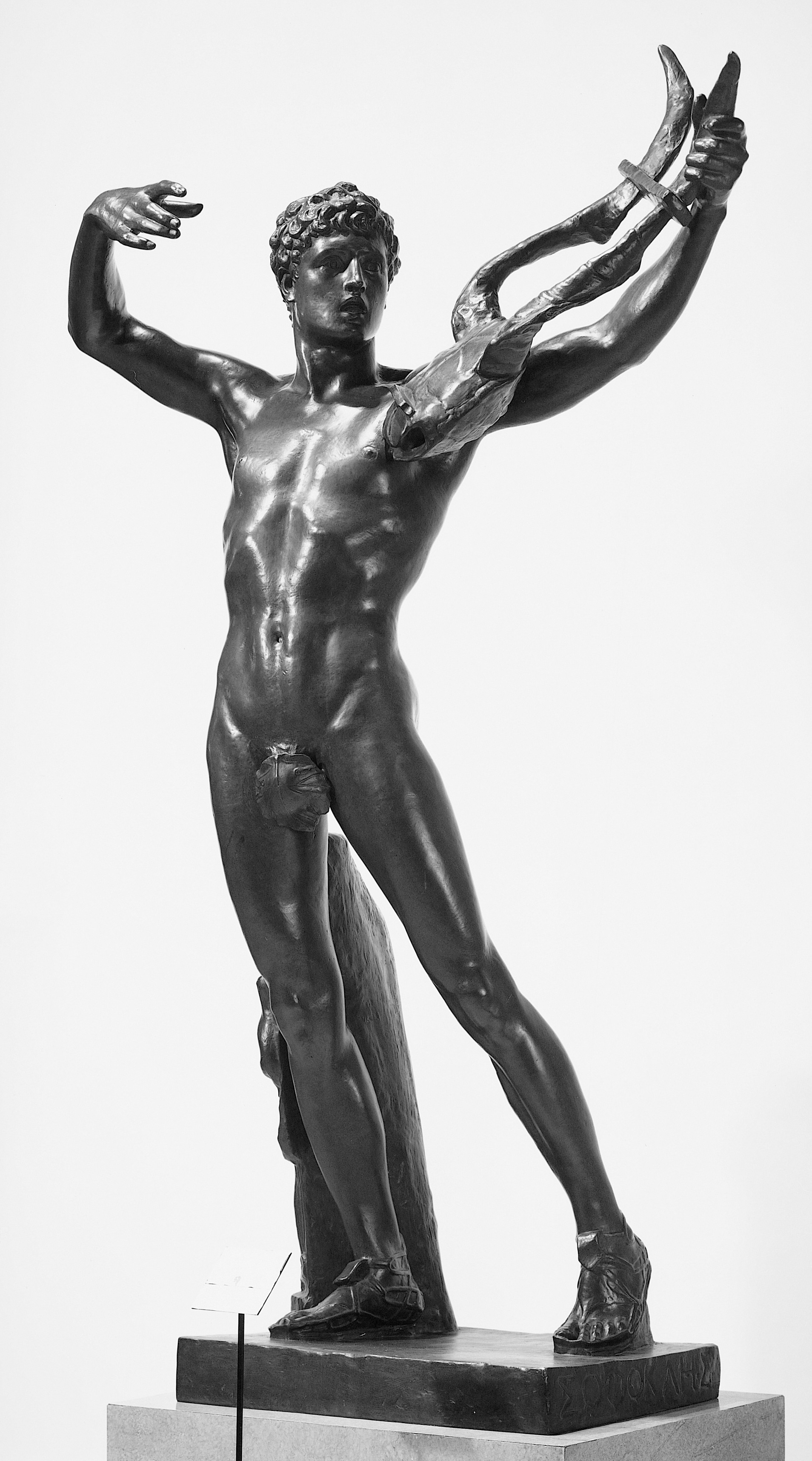 This is clear when we come to drama: in the tragedies the role of the Chorus is defined in The Ancient Greek Hero in 24 Hours:

The chorus represents a “go-between” or “twilight zone” between the heroes of the there-and-then and the audience of the here-and-now, which happens to be, in the case of the dramas, Athens in the 5th century. The chorus reacts both as if it were the audience itself and as if they were contemporaries of the heroes. The members of the chorus, who sang and danced the roles of groups such as old men or young girls who are “on the scene” in the mythical world of heroes, were non-professionals, whereas the actors (the first, second, and third actor), who spoke the parts of the main characters, were professionals. For Athenian society, the ritual emphasis is on the experience of the pre-adult chorus and, through them, of the adult audience
(H24H ‘Introduction to tragedy’, III§4)

Although the roles were taken by young men, they were portrayed as a group relevant to the theme of the drama: Argive Elders in the Agamemnon of Aeschylus, Bacchic revelers in the Bacchae, the Furies themselves in the Eumenides.

During the interchanges with the main characters they question, encourage, discourage. But every so often they break into odes which comment on what is happening, often it seems with reference to other myths that have resonance with the action of the tragedy. Perhaps the singing and dancing was more like chanting and a series of stylized or ritualized movements.

Apart from the role of the Chorus, the word is used within the text of the dramas as well, for example:

305 You will be a living feast for me, even though you will not be slain at an altar; now you will hear my hymn, a spell for you.
Come now, let us also join in the khoros, since it seems good to make our hateful song [mousa] known 310 and to show how our group [stasis] distributes positions among men. We believe that we give straight dikē.
(Aeschylus Eumenides 305–312, Sourcebook) 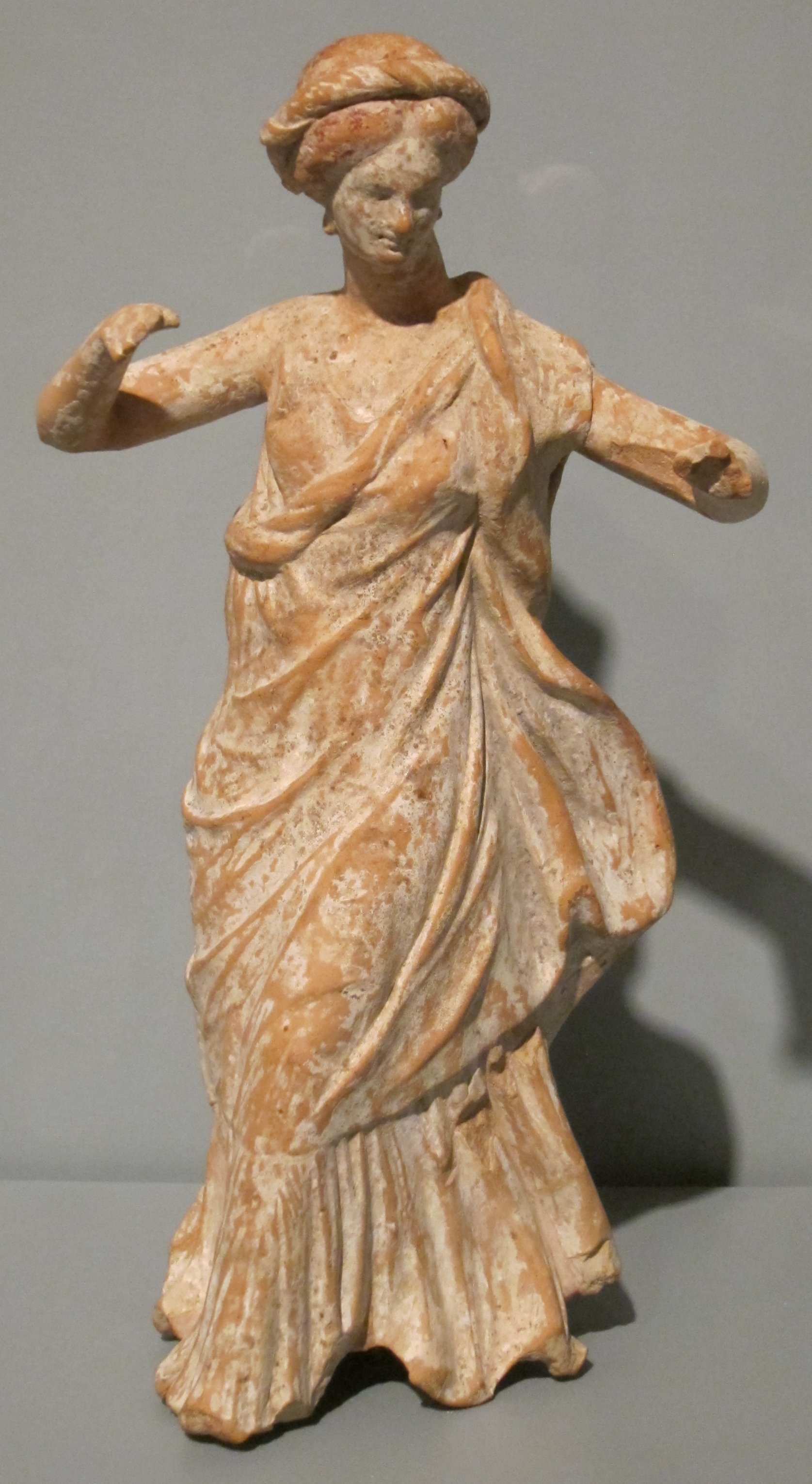 This is the Chorus of Furies (Erinyes) referring to their own actions in a formal, ritualized way. But they seem to be referring more to singing than to dancing. The Chorus of Bacchae are also performing in a correct way:

For now I will celebrate Dionysus with hymns, at all times according to proper custom.
Blessed is he who keeps his life pure, with a good daimōn and knowing the rites of the gods, and who has his psukhē initiated into the Bacchic revelry, dancing in inspired frenzy 75 over the mountains with holy purifications, and who, revering the mysteries of great mother Kybele, brandishing the thyrsos, 80 garlanded with ivy, serves as attendant [therapōn] to Dionysus. Go, Bacchae, go, Bacchae, bringing home the god Bromios, himself child of a god, 85 from the Phrygian mountains to the broad public spaces, suitable for khoroi.
(Euripides Bacchae 71–88, Sourcebook)

But the messenger relates to Pentheus how the local woman are behaving:

680 And I see three companies [thiasoi] of women’s choruses [khoroi], 681 one of which Autonoe was leading, the second, 682your mother Agaue, and the third chorus [khoros], Ino.683 All were sleeping, their bodies relaxed, 684 some resting their backs on the leaves of fir trees, 685 while others were laying their heads on oak leaves strewn on the ground, 686 lying here and there in a moderate way [sōphronōs] and not, as you say, 687 filled with wine in a scene of wine-cups and tunes played on the pipe.
(Euripides Bacchae 680–687, Sourcebook)

So the group of women who are not carrying out the ritual correctly can still be described as a khoros. There are also references to dancing. Kadmos asks:

Where is it necessary to take the khoros, where must we put our feet and 185 shake our grey heads?

The images I found to illustrate this post show different aspects of the actions of a khoros, as a leader of singing or of dancing, and in a group.

Please join me in the forum to explore how the word is used, and how the activities of the khoros are described or depicted!

___
Sarah Scott is an editor and technical author living in Scotland. She has taken part in all four iterations of HeroesX, and has a lifelong love of language, literature, and learning.