This month I’ve chosen as our Core Vocab word (from The Ancient Greek Hero in 24 Hours (H24H)[1] and the Sourcebook[2]) menos [μένος] ‘power, life-force, activation’ (divinely infused into cosmic forces, like fire and wind, or into heroes); a partial synonym of thūmos; a partial synonym of mēnis‘.

As a reminder of those other words: thūmos is defined as ‘heart, spirit’ (designates realm of consciousness, of rational and emotional functions); depending on context can be translated as either ‘mind’ (thinking) or ‘heart’ (feeling)’; and mēnis as ‘superhuman anger, cosmic sanction’.

So, as usual, I started to look for passages that demonstrate how the word is used in context.

In this first passage, we can see the moment of activation with a cosmic force:

Then Pallas Athena put power [menos] and courage into Diomedes, son of Tydeus, that he might excel all the other Argives, and cover himself with glory [kleos]. She made a stream of fire flare from his shield and helmet [5] like the star that shines most radiantly in summer after its bath in the waters of Okeanos—even such a fire did she kindle upon his head and shoulders as she bade him speed into the thickest hurly-burly of the fight.
(Iliad 5.1–8, adapted from Sourcebook)

Diomedes will go on to lead a devastating attack on the Trojan forces and seems unstoppable—like a superhuman force—until he encounters Apollo who is protecting Aeneas, and, wisely, withdraws from a fourth attempt:

Thrice did he spring forward with might and main to slay him, and three times did Apollo beat back his gleaming shield. When he was coming on for the fourth time, equal [isos] to a superhuman force [daimōn], Apollo shouted to him with a terrifying voice and said, [440] “Take heed, son of Tydeus, and draw off; think not to match yourself against gods, for men that walk the earth cannot hold their own with the immortals.”
The son of Tydeus then gave way for a little space, to avoid the anger [mēnis] of the god…
(Iliad 5.436–444, Sourcebook)

Away from the fighting at Troy, Telemachus is also ‘activated’ by Athena after she has visited in the guise of Mentes:

….into his heart [thūmos] 321 she [= Athena] had placed power [menos] and daring, and she had mentally connected [hupo-mnē] him with his father 322 even more than before. He felt the change, wondered at it, and knew that the stranger had been a god
(Odyssey 1.320–323, Sourcebook)

He doesn’t come into his physical strength until after his father’s return and the battle with the suitors, but in the meantime by at least verbally confronting the suitors in the assembly (albeit unsuccessfully) and making his voyage to visit Nestor and Menelaos, he grows in mental power—and perhaps the mental connection with his father also provides some of his power. It might be interesting to see whether there are any situations where Odysseus himself is described as having menos. 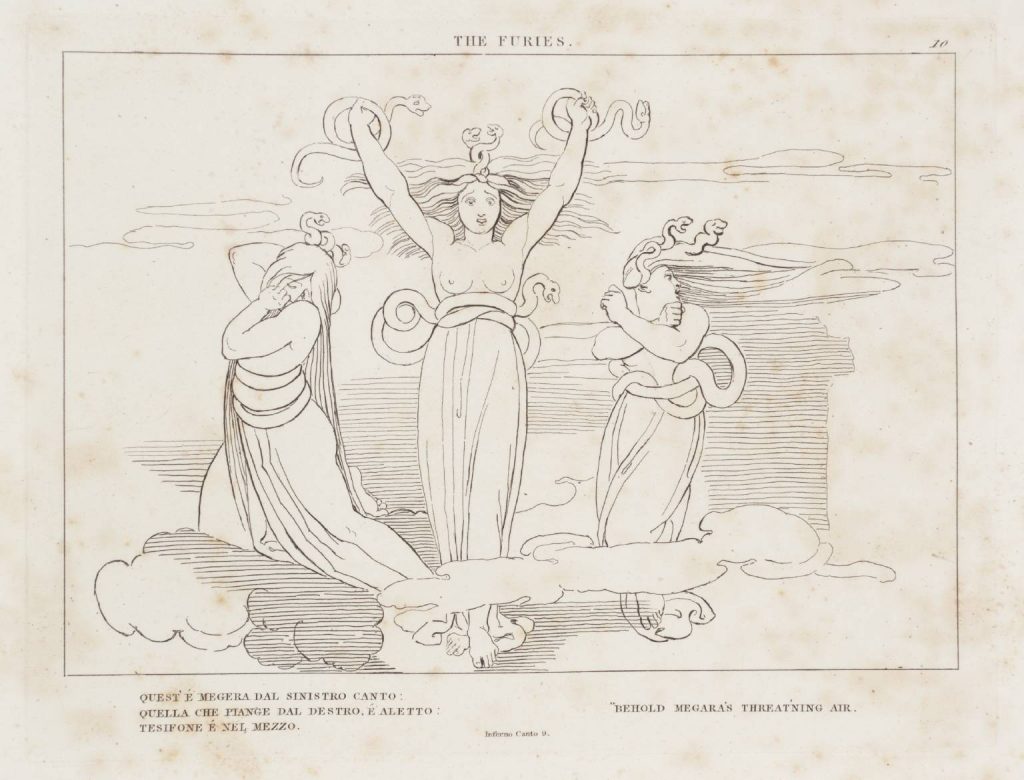 At the end of Eumenides Athena urges the Furies to accept a new role:

{Athena} … Put to sleep the bitter power [menos] of your dark flow, 833 since you will receive an honor [tīmē] that is revered [semnē], and you will share your dwelling [sun-oikeîn] with me. 834 You will have the first-fruits of this plentiful land, 835 and fire-sacrifices before childbirth—as also before matrimonial initiation [telos] 836 —that is what you will have. And, once you have these things, you will keep on transmitting forever these words of mine here, giving your approval [ep-aineîn].

{Chorus} That I should suffer [paskhein] this, alas! That I, who have ancient phrenes, should live beneath the earth, alas, bereft of tīmē and unclean! 840 I am breathing menos and all possible rage. Oh, alas, earth! What is coming over me, what anguish steals into my heart! Hear my heart [thūmos], mother night, 845 for the deceptions of the gods are hard to fight, and they have nearly deprived me of my ancient tīmai.
(Aeschylus Eumenides 832–847, Sourcebook)

In these speeches the word seems to have more the sense of being a partial synonym of mēnis. 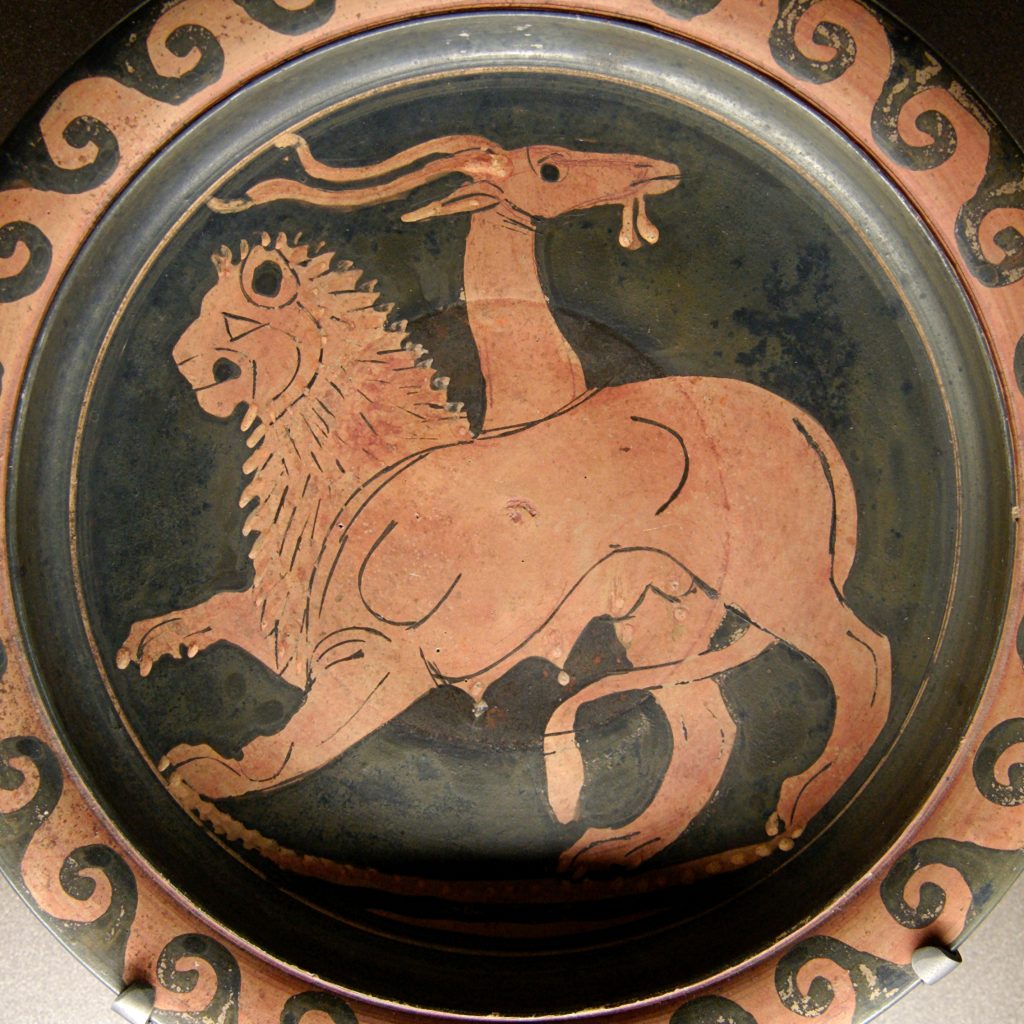 A fiery menos can be found in the description of the Chimera, who is a monstrous divine being:

When he had received the baneful markings [sēma pl.] he first commanded Bellerophon to kill that savage monster, the Chimaera, [180] who was not a human being, but a goddess, for she had the head of a lion and the tail of a serpent, while her body was that of a goat, and she breathed forth the might [menos] of flames of fire; but Bellerophon slew her, for he was guided by divine signs.
(Iliad 6.178–182)

Here is an example of a wind that has this force:

That day, indeed, they’d come very close to the island,
but Zeus stirred up a driving northerly gale,
marking with rain the Great Bear’s sodden orbit,
Now all day long it belew gently, barely ruffling
the leaves on trees’ outermost branches, high in the mountains,
but at night, with monstrous violence, it screamed down seaward,
its blasts high-cresting the waves.
(Apollonius of Rhodes Argonautica 2.1097–1103 translated by Peter Green[3])

Again, this force has emanated from a god. But doesn’t have to be a god who can put menos into people. In the midst of battle both Hector and Ajax make rousing speeches to their comrades:

… swarm round the ships and fight. [495] If any of you is struck by spear or sword and loses his life, let him die; he dies with honor who dies fighting for his country; and he will leave his wife and children safe behind him, with his house and allotment unplundered if only the Achaeans can be driven back to their own land, they and their ships.” [500] With these words he put life [menos] and spirit [thūmos] into them all.

Ajax on the other side exhorted his comrades saying, “Shame [aidōs] on you Argives, we are now utterly undone, unless we can save ourselves by driving the enemy from our ships. Do you think, if Hector takes them, [505] that you will be able to get home by land? Can you not hear him cheering on his whole army to fire our fleet, and telling them to remember that they are not at a dance [khoros] but in battle? Our only thought [noos] and plan [mētis] [510] is to fight them with strength and power [menos]; we had better chance it, life or death, once for all, than fight long and without issue hemmed in at our ships by worse men than ourselves.”
With these words he put life [menos] and spirit [thūmos] into them all.
(Iliad 15.494–514, adapted from Sourcebook)

This phrase appears in several other places in Iliad. Is an epic hero’s power of persuasion enough to give the same sort of force as if a god has activated someone with a cosmic force? Does it suggest their potential as cult heroes? Or is this a more prosaic use of the word? 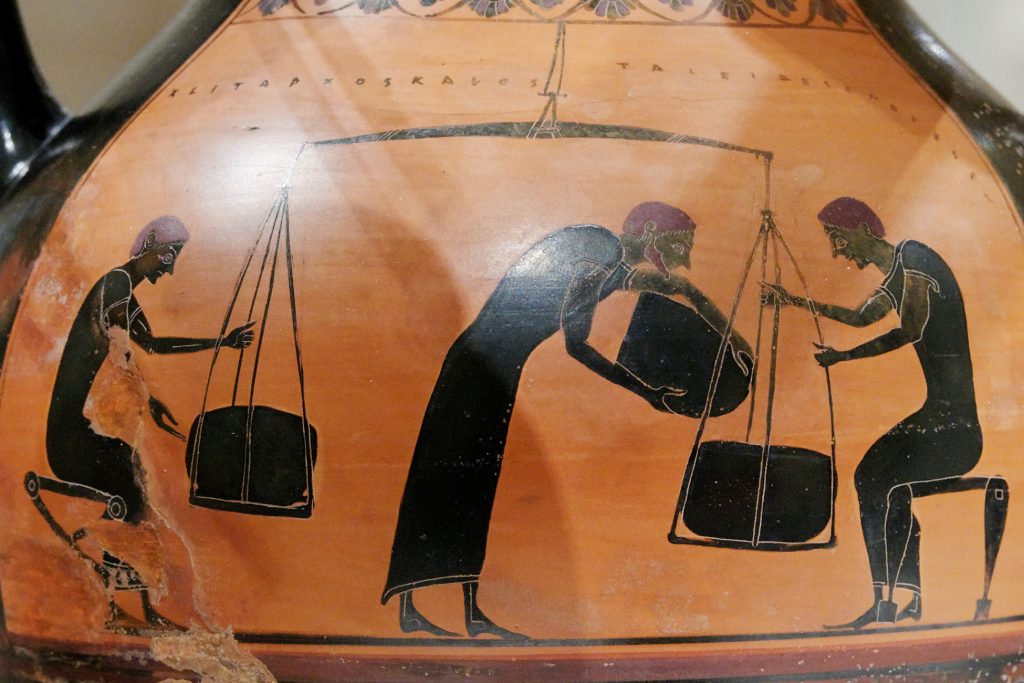 My final example is from Xenophon:

But, Socrates, if the appearance of the master in the field, of the man who has the fullest power to punish the bad and reward the strenuous workmen, makes no striking impression on the men at work, I for one cannot envy him. But if at sight of him they bestir themselves, and a spirit of determination and rivalry and eagerness to excel falls on every workman, then I should say: this man has a touch of the kingly nature in him.
(Xenophon Economics 21.10, on Perseus, translator not given)
τοῦ δὲ δεσπότου ἐπιφανέντος, ὦ Σώκρατες, ἔφη, ἐπὶ τὸ ἔργον, ὅστις δύναται καὶ μέγιστα βλάψαι τὸν κακὸν τῶν ἐργατῶν καὶ μέγιστα τιμῆσαι τὸν πρόθυμον, εἰ μηδὲν ἐπίδηλον ποιήσουσιν οἱ ἐργάται, ἐγὼ μὲν αὐτὸν οὐκ ἂν ἀγαίμην, ἀλλ᾽ ὃν ἂν ἰδόντες κινηθῶσι καὶ μένος ἑκάστῳ ἐμπέσῃ τῶν ἐργατῶν καὶ φιλονικία πρὸς ἀλλήλους καὶ φιλοτιμία κρατιστεῦσαι ἑκάστῳ, τοῦτον ἐγὼ φαίην ἂν ἔχειν τι ἤθους βασιλικοῦ.
(Greek text on Perseus)

Although this is another example of the menos coming not from a god or even a hero, there is still a power hierarchy. Does that mean the overseer really has a kingly nature, and if so does that really put him on a par with epic heroes or gods? Or does the word by this time lose its ‘heroic’ associations altogether?

In the examples above that did involve gods it was Athena or Zeus imbuing a hero with menos: which other gods do this, and under what circumstances? Which kind of menos are you finding in the texts: power, strength? And in particular passages is it closer in meaning to thūmos or mēnis?

I have illustrated this post with representations of the passages. How would you choose to illustrate the word?

I hope you will join the discussion in the forum to explore further the uses of this word.

Marie-Lan Nguyen (2011), photo: Men weighing merchandise. Side B of an Attic black-figure amphora, Taleides Painter, between circa 540 and circa 530 BCE. Metropolitan Museum of Art. 47.11.5. Creative Commons CC BY 2.5, via Wikimedia Commons.

Note: Images have been selected from pictures that are freely available with open source or Creative Commons licenses or from photographs sent in by community members for the purpose. The images in this post are intended to suggest the subject, rather than illustrate exactly—as such, they may be from other periods, subjects, or cultures. Attributions are based where possible by those shown by museums, or on Wikimedia Commons, at the time of publication on this website.
Images accessed April 2017.