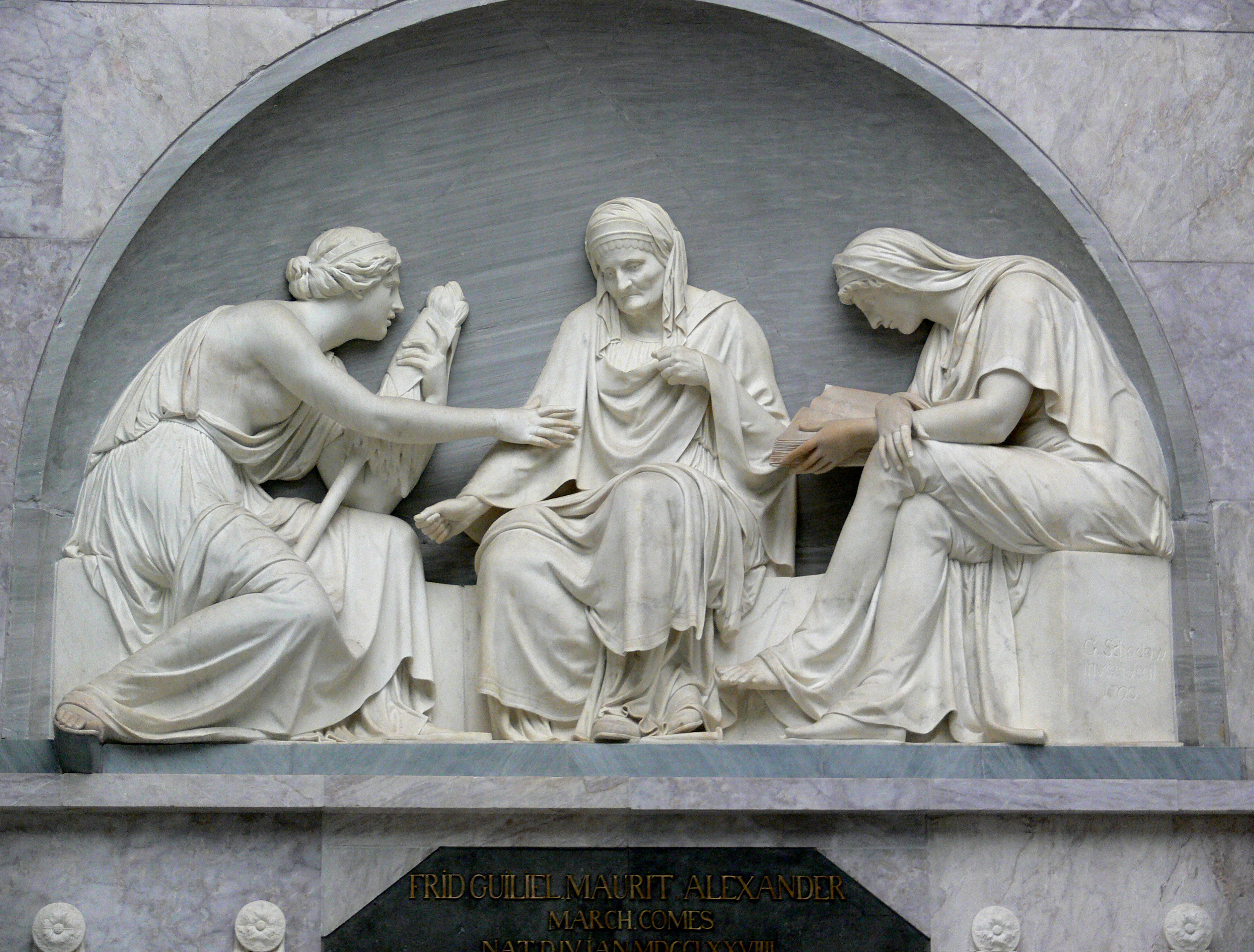 In the forum we have previously discussed the ancient Greek Moirai in comparison with the Nordic Norns, so for this month’s Core Vocab I thought it might be interesting to look at the word moira (plural moirai), defined in the Core Vocab as ‘portion; portion of meat divided at a sacrifice; lot in life, fate, destiny.’[1]

Just that range of meanings in the definition is intriguing. I am curious to see whether it appears that all those meanings are in the air when the word is used, or whether one meaning or another is specific in certain contexts…and as always, whether the main focus of the word appears to change over time.

Here is an example from Homeric epic, which occurs several times: 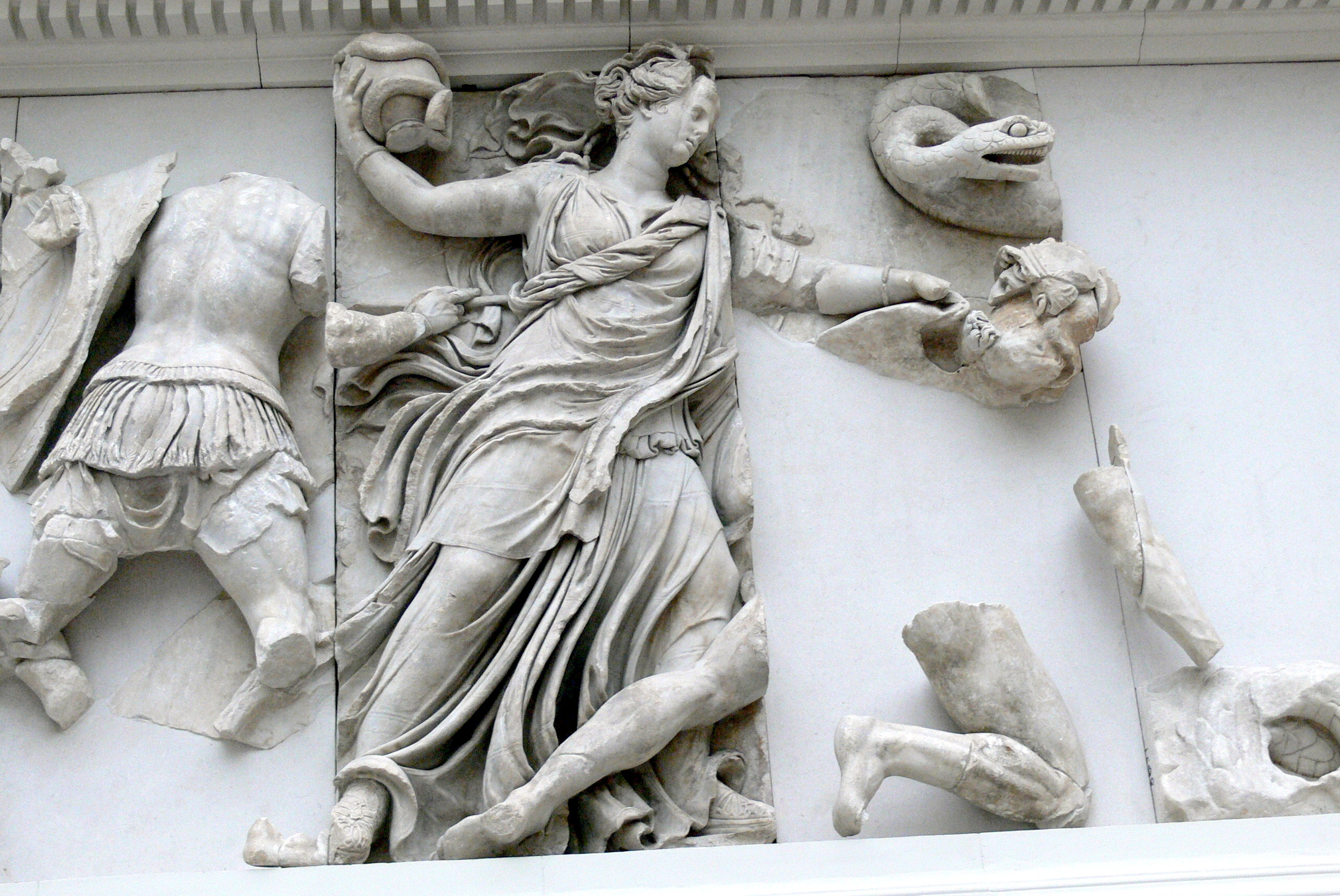 The word can also be personified as a goddess, as in the speech of Agamemnon where he says:

……ἐγὼ δ᾽ οὐκ αἴτιός εἰμι,
ἀλλὰ Ζεὺς καὶ Μοῖρα καὶ ἠεροφοῖτις Ἐρινύς,
οἵ τέ μοι εἰν ἀγορῇ φρεσὶν ἔμβαλον ἄγριον ἄτην,
ἤματι τῷ ὅτ᾽ Ἀχιλλῆος γέρας αὐτὸς ἀπηύρων.
But I am not responsible [aitios]. 87 No, those who are really responsible are Zeus and Fate [Moira] and the Fury [Erinys] who roams in the mist. 88 They are the ones who, at the public assembly, had put savage derangement [atē] into my thinking [phrenes] 89 on that day when I myself deprived Achilles of his honorific portion [geras] (Iliad 19.86–89, Sourcebook)

Sometimes there are three Moirai:

Night bore also hateful Destiny, and black Fate, and Death; she bore Sleep likewise, she bore the tribe of dreams; these did the goddess, gloomy Night bear after union with none. Next again Blame [Mōmos], and Care full-of-woes, 215 and the Hesperides, whose care are the fair golden apples beyond the famous Okeanos, and trees yielding fruit; and she produced the Destinies [moirai], and ruthlessly punishing Fates: Klotho, Lachesis, and Atropos, who assign to men at their births to have good and evil; 220 who also pursue transgressions both of men and gods, nor do the goddesses ever cease from dread wrath, before they have repaid sore vengeance to him, whosoever shall have sinned. (Hesiodic Theogony 211–222, Sourcebook)

Here is an example from tragedy; Oedipus is speaking:

χωρεῖτε καὶ μὴ ψαύετ᾽, ἀλλ᾽ ἐᾶτέ με
1545 αὐτὸν τὸν ἱερὸν τύμβον ἐξευρεῖν, ἵνα
μοῖρ᾽ ἀνδρὶ τῷδε τῇδε κρυφθῆναι χθονί.
Onward. Do not touch me, but 1545 allow me unaided to find the holy [hieros] tomb where it is my fate [moira] to be secreted away in this land
(Oedipus at Colonus 1544–1546, Sourcebook)

Here again it seems to have the meaning of ‘fate’ although it would be interesting to see if that is the case in other dramas.

In Plato, according to LSJ, it can also have the meaning of ‘providence’ as in θείᾳ μοίρᾳ, ‘divine providence’, such as here:

ἐμοὶ δὲ τοῦτο, ὡς ἐγώ φημι, προστέτακται ὑπὸ τοῦ θεοῦ πράττειν καὶ ἐκ μαντείων καὶ ἐξ ἐνυπνίων καὶ παντὶ τρόπῳ ᾧπέρ τίς ποτε καὶ ἄλλη θεία μοῖρα ἀνθρώπῳ καὶ ὁτιοῦν προσέταξε πράττειν.
And this is a duty which the god has imposed upon me, as I am assured by oracles [manteia], visions, and in every sort of way in which the will of divine power was ever signified to anyone. (Plato, The Apology of Socrates 33c, Sourcebook)

But another meaning seems to be in play in other places, for example:

τὸν δ᾽ αὖτε προσέειπε Γερήνιος ἱππότα Νέστωρ:
‘ναὶ δὴ ταῦτά γε πάντα φίλος κατὰ μοῖραν ἔειπες.
And Nestor, charioteer of Gerenia, made answer, “My son, all that you have said is true.” (Iliad 10.168–169, Sourcebook)
Then the horseman, Nestor of Gerenia, answered him:“Nay verily, friend, all this hast thou spoken according to right. (Murray, on Perseus)

And Homeric epic also uses the word in the the sense of ‘portion’:

τρεῖς γάρ τ᾽ ἐκ Κρόνου εἰμὲν ἀδελφεοὶ οὓς τέκετο Ῥέα
Ζεὺς καὶ ἐγώ, τρίτατος δ᾽ Ἀΐδης ἐνέροισιν ἀνάσσων.
τριχθὰ δὲ πάντα δέδασται, ἕκαστος δ᾽ ἔμμορε τιμῆς:
190ἤτοι ἐγὼν ἔλαχον πολιὴν ἅλα ναιέμεν αἰεὶ
παλλομένων, Ἀΐδης δ᾽ ἔλαχε ζόφον ἠερόεντα,
Ζεὺς δ᾽ ἔλαχ᾽ οὐρανὸν εὐρὺν ἐν αἰθέρι καὶ νεφέλῃσι:
γαῖα δ᾽ ἔτι ξυνὴ πάντων καὶ μακρὸς Ὄλυμπος.
τώ ῥα καὶ οὔ τι Διὸς βέομαι φρεσίν, ἀλλὰ ἕκηλος
195καὶ κρατερός περ ἐὼν μενέτω τριτάτῃ ἐνὶ μοίρῃ.
We were three brothers whom Rhea bore to Kronos—Zeus, myself, and Hadēs who rules the world below. Heaven and earth were divided into three parts, and each of us was to have an equal share.
[190] When we cast lots, it fell to me to have my dwelling in the sea for evermore; Hadēs took the darkness of the realms under the earth, while air and sky and clouds were the portion that fell to Zeus; but earth and great Olympus are the common property of all. Therefore I will not walk as Zeus would have me. For all his strength, let him keep to his own third share
[195] and be contented without threatening to lay hands upon me as though I were nobody.
(Iliad 15.187–195, Sourcebook) 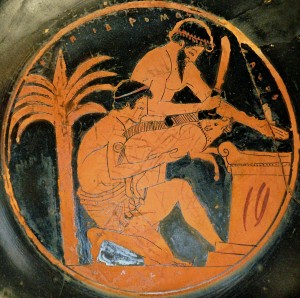 Similarly the sense of a portion comes up in examples like this, seemingly more mundane but perhaps equally important as part of ritual and correct behavior:

When I started searching, I found that there are related verbs, μείρομαι [meiromai], ‘to receive as one’s portion’; and μοιράω [moiraō], ‘to share, divide, distribute’, so we might also look at how and where those words are used.

I have chosen to illustrate this post with the personified goddess, the three Moirai, and a meat sacrifice.

Please join me in the forum to find other passages and images.