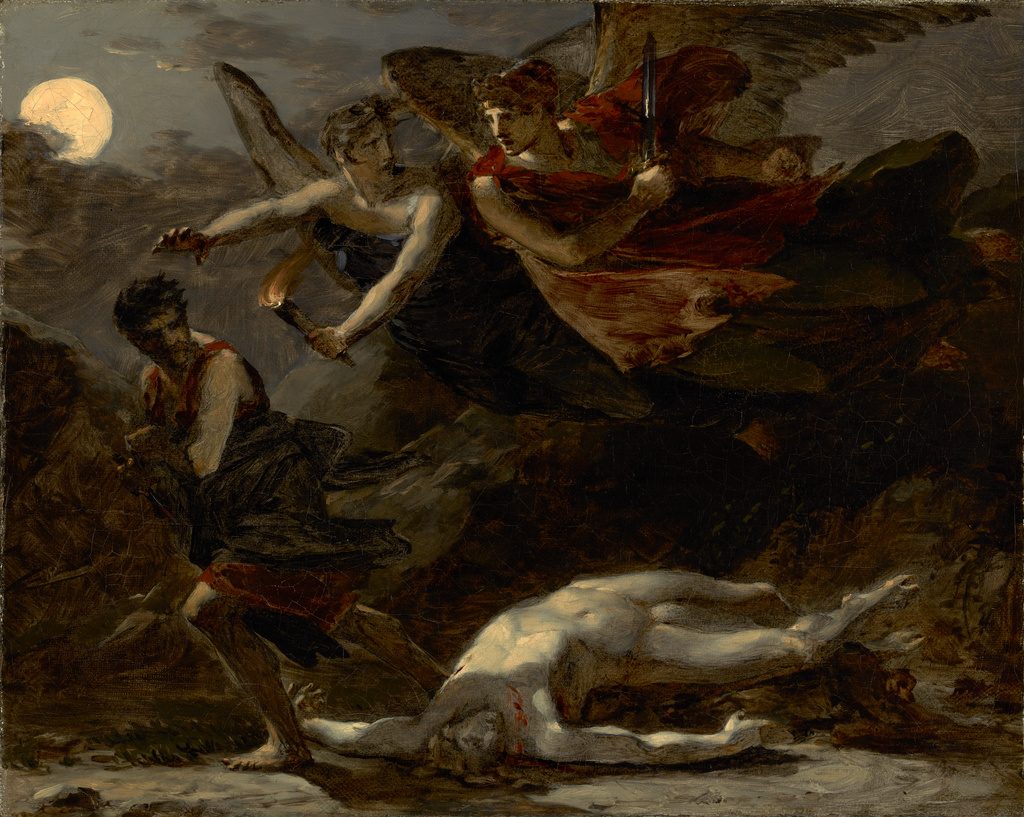 In our Core Vocab definitions, found in The Ancient Greek Hero in 24 Hours[1] and the associated Sourcebook[2], Gregory Nagy provides the following definition: “nemesis indicates the process whereby everyone gets what he or she deserves.” 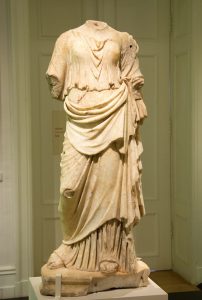 Here are some passages in which the word is used, as a starting point for further exploration and discussion of the word.

When Penelope complains about the bard Phemios’ song:

[345] “Mother,” answered the spirited Telemachus, “let the bard sing what he has a mind [noos] to; bards are not responsible [aitios] for the ills they sing of; it is Zeus, not they, who is responsible [aitios], and who sends weal or woe upon humankind according to his own good pleasure. [350] There should be no feeling of sanction [nemesis] against this one for singing the ill-fated return of the Danaans, for people always favor most warmly the kleos of the latest songs.
(Odyssey 1.345–352, Sourcebook)

I notice the word is used in close proximity to aitios, ‘responsible’ and I wonder whether this relationship occurs elsewhere, or whether there are other words that are also associated with it. 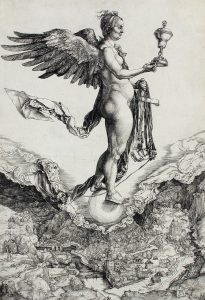 Some of the Trojan elders, sitting on the walls in discussion, use the word:

When they saw Helen coming towards the tower, [155] they said softly to one another, “There is no way to wish for retribution [nemesis] that Trojans and strong-greaved Achaeans should endure so much and so long, for the sake of a woman so marvelously and divinely lovely. Still, fair though she be, let them take her and go, [160] or she will breed sorrow for us and for our children after us.”
(Iliad 3.154–160, Sourcebook)

The “retribution” here for the Trojans is, presumably, because of Paris’ abduction of Helen, although it is interesting that even the Trojan elders recognize the suffering of the Achaeans in battle.

Perhaps of relevance for the use of this word here is Helen herself: Gregory Nagy points out:

§3. In one version of the surviving myths about Helen, the mother of Helen is in fact a goddess, named Nemesis (Cypria fragment 7 ed. Allen, by way of Athenaeus 8.334b–d).[3]

Here it seems Nemesis was a goddess, and in previous discussions of Core Vocab words we have sometimes found that abstract nouns are similarly personified as goddesses.

In another post, Gregory Nagy quotes a passage from Pausanias relating to the goddess Nemesis:

{1.33.2} About sixty stadium-lengths from Marathon as you go along the road by the sea to Oropos stands Rhamnous. The houses [oikēseis] for human habitation are on the coast, but a little way inland is a sacred space [hieron] of Nemesis, who of all the gods [theoi] is the most inexorable toward humans who-commit-outrage [hubristai]. It is thought that the wrath [mēnīma] of this goddess [theos feminine] countered the foreigners [barbaroi, = Persians] who landed at Marathon. Scornfully thinking that nothing stood in the way of their capturing Athens, they were bringing a piece of Parian marble for the making [poiēsis] of a trophy [tropaion], as if their task were already finished.

{1.33.3} Of this marble Pheidias made a statue [agalma] of Nemesis, and on the head of the goddess [theos feminine] is a garland [stephanos] picturing deer and small statues [agalmata] of Nīkē. In her left hand she holds an apple branch, in her right hand a cup on which are crafted the figures of Aethiopians.[4] 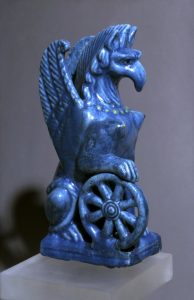 Pausanias offers an explanation as to why the goddess was honored in this particular place. Is there evidence that she was similarly honored elsewhere? Are there references in any other texts, or are there statues or other artifacts anywhere? Here she is described as having a garland with deer and small statues of Nikē (victory); in the images in this post she is depicted as a female figure perhaps with a wheel, or even as in the form of a gryphon. How else was she represented?

As a goddess, according to Hesiod, she was the daughter of Night, along with other beings related to vengeance. But although described as “a woe to mortal men” in Theogony 223? it seems Nemesis is necessary: in describing the “next” generation when social order breaks down even nemesis will no longer be present:

And then, flying off to Olympus, away from the broad earth,
covering their beautiful complexion with white veils,
heading for the race of immortals and leaving humans behind,
200 Aidōs and Nemesis will depart. What will be left behind are baneful pains
for mortal humans. And there will be nothing to ward off evil.
(Hesiod Works & Days, 197–201, Sourcebook)

Where else is the word used, and in those passages does it refer to a process or to the goddess who instigates or carries out that process? Is it referred to in terms that seem to present the process or the goddess as an evil or as a benefit?

The following work was not consulted, but is noted here as it might be of interest to those who wish to read further:
Ebbott, M. 1999. “The Wrath of Helen: Self-Blame and Nemesis in the Iliad.” In Nine Essays on Homer, ed. M. Carlisle and O. Levaniouk, 3–20. Lanham. Cited in Bonafazi, Anna. “Helen’s mixed feelings for Alexander in Iliad 3: the cognitive, pragmatic, and emotional significance of third-person pronouns.” Classical Inquiries. May 2, 2016.

Sarah Scott has a degree in Language from the University of York, and has worked as an editor, technical author, and documentation manager. She is Associate Producer for the HeroesX project, and one of the Executive Editors of the HeroesX Sourcebook. She is an active participant and member of the editorial team in Kosmos Society, with a particular interest in content development, document management, word studies, language learning, comparative linguistics, and digital humanities.